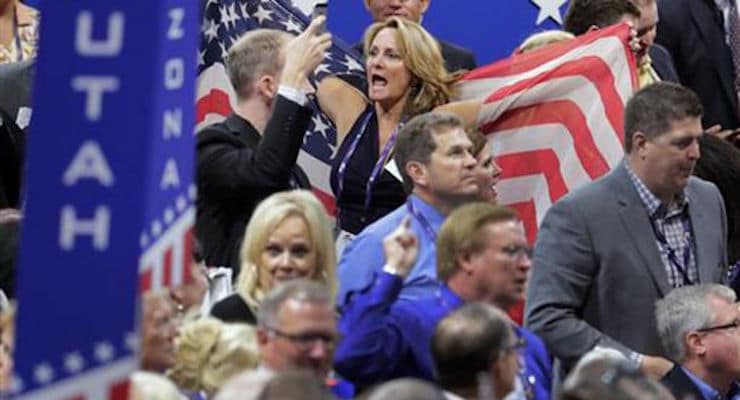 The last of the Never Trump delegates tried to derail the rules vote on the Republican National Convention, but were easily defeated. (Photo: AP)

CLEVELAND, OHIO–-Officials on Monday adopted convention rules by voice vote, setting off a protest on the first day of the Republican National Convention in Cleveland. The convention rules were adopted in two voice votes over the objections from the dwindled and remaining delegates from the so-called “Never Trump” movement, shouting “roll call vote” in a last ditch effort to fracture party unity.

Still, the showdown, which was headed up by Ken Cuccinelli and Utah Sen. Mike Lee, effectively ended the Never Trump movement. In truth, the rules package past last week was the catalyst to squash the movement, but the vocal minority attempted to derail Mr. Trump, nevertheless. While they claim to simply want to influence the rules for the following convention, in truth they hope to have a fractured vote for the presumptive nominee with them backing Texas Sen. Ted Cruz.

The group wanted to change a rule that requires delegates to vote for the candidate that won the primaries and caucuses. Under the party rules, Mr. Trump’s is ensured the nomination because he’s accumulated more than the 1,237 bound delegates needed to win outright on the first ballot.

Mr. Cuccinelli, Sen. Lee and the other minority delegates not aligned with 44 other states were hoping for a state-by-state vote on the rules that bind delegates to back the New York businessman. While Mr. Trump won the most votes ever in a Republican presidential primary, Sen. Cruz won just 3 primaries. The rest of his victories came from party-held county conventions and caucuses.

The Trump Campaign was “livid” at the last ditch effort. The group claimed to have the signatures from a majority of at least eight state delegations, which could technically allow them to file a report challenging the convention rules or other decisions.

“Despite every obstacle thrown in our way, the movement of all the stakeholders involved in this effort have gained a majority of the delegates in 10 states,” M. Dane Waters, co-founder of Delegates Unbound said in a written statement. “Now we take this fight to the floor.”

While Trump wasn’t truly in danger of losing the necessary delegates to get nominated, the anti-Trump movement is an embarrassment to the party. Paul Manafort, Trump’s campaign manager, scoffed at the vote on Monday morning during a press briefing with reporters.

“We don’t expect anything to come out of the rules committee,” Mr. Manafort said. “It’s not a movement. It’s some rogue, recalcitrant delegates,” he added at another meeting.

Melania Trump: Donald "Will Never Be Bought, Never Let You Down"