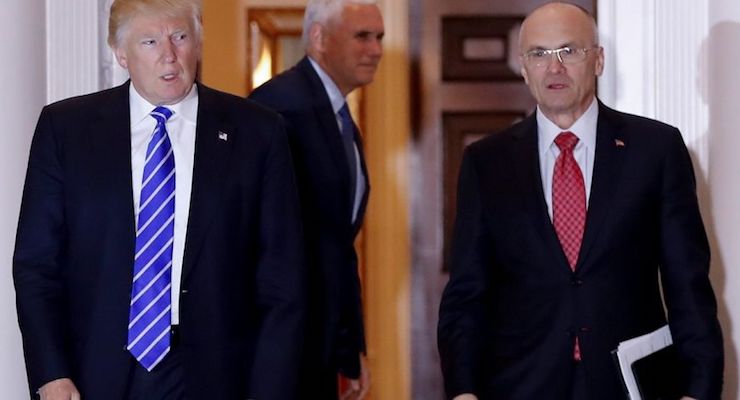 Andrew Puzder, the fast-food chain leader and President Donald J. Trump’s nominee for Secretary of Labor, has withdrawn on the eve of his scheduled Senate hearing.

“After careful consideration and discussions with my family, I am withdrawing my nomination for Secretary of Labor,” Mr. Puzder said in the statement.

“I am honored to have been considered by President Donald Trump to lead the Department of Labor and put America’s workers and businesses back on a path to sustainable prosperity. I want thank President Trump for his nomination. I also thank my family and my many supporters – employees, businesses, friends and people who have voiced their praise and hopeful optimism for the policies and new thinking I would have brought to America as Secretary of Labor.”

Democrats have sought to tarnish nearly everyone of President Trump’s Cabinet nominees, calling them unfit for office and even corrupt. The result has been the longest period in U.S. history that a minority party has been able to hold up the confirmation of a president’s cabinet, in some instances putting the national security of the nation at risk.

“It is extremely unfortunate that the confirmation process has resulted in a qualified and dedicated man withdrawing from the Labor Secretary nomination,” Leslie Shedd, a spokeswoman for the National Restaurant Association, said in a written statement. “Andy Puzder would have made a great Labor Secretary.”

Mr. Puzder is the CEO of CKE Restaurants, which franchises the fast food chains Hardee’s and Carl’s Jr. On the campaign trail, then-candidate Trump promised to appoint the best and the brightest from the private sector, rather than “political hacks.”

The left, getting help from establishment Republicans, wanted to drum up his divorce, specifically resurfacing an interview his ex-wife did with Oprah Winfrey decades ago. But his ex-wife Lisa Fierstein has long-retracted those claims.