HomeNewsPoliticsTrump Meets With ObamaCare ‘Victims’ Before Heading to Kentucky for Rally

Trump Meets With ObamaCare ‘Victims’ Before Heading to Kentucky for Rally 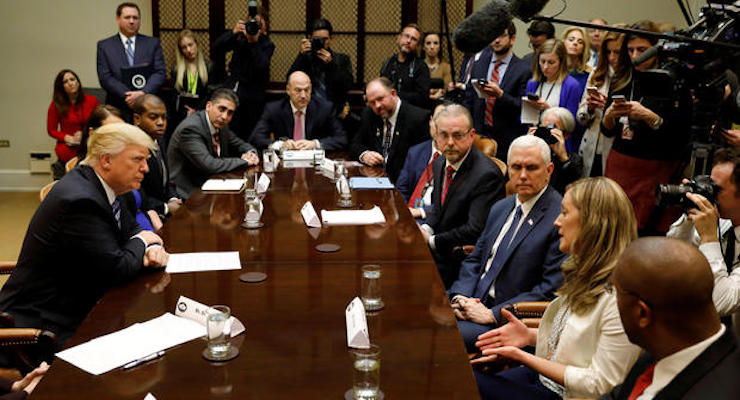 U.S. President Donald Trump listens during a meeting about healthcare at the White House in Washington, U.S., March 13, 2017. (Photo: Reuters)

President Donald J. Trump met with ObamaCare “victims” at the White House Monday before heading out to the campaign trail next week to sell the House repeal bill. The meeting comes ahead of the scoring released by the Congressional Budget Office (CBO), which is expected to show modest costs with several millions losing their Medicaid insurance.

But the president wanted to tell the other side of the story, which is certain to get less coverage in the mainstream media.

Joel Brown, a resident of Tennessee, said not only have his rate increases been astronomical because there’s not competition, but his plan now has a $7,000 deductible. His county has only one insurance option. Kim Sertich, of Arizona, which is one of the worst states for premium increases under ObamaCare, said she was forced to go into a faith-based cost-sharing program after having losing her coverage.

“More competition and less regulation will finally bring down the cost of care,” President Trump said. “The press is making it look so wonderful. It’s a little bit like President Obama. When he left, people liked him. When he was here, people didn’t like him so much.”

He predicted the current law will collapse, saying, “Whether we do it or not, it’ll be imploded off the map.”

United HealthGroup Inc. (NYSE:UNH), the nation’s largest insurer, announced in April 2016 that the company would bail on all but a “handful” of ObamaCare exchanges in 2017. Regulators confirmed they are completely abandoning exchanges in Missouri, North Carolina, Pennsylvania, Tennessee and Washington state, while partially withdrawing from Georgia.

In August, Aetna (NYSE:AET), the nation’s third largest insurer, announced the most significant withdrawal from the federal marketplaces set up by ObamaCare to date. Citing heavy losses, Chairman and CEO Mark T. Bertolini said Aetna would severely reduce its participation from 15 states to just 4 in 2017.

Now, nearly 33% of all U.S. counties have only one insurer offering plans on their state’s exchange and 34% fewer doctors and other health care providers accept ObamaCare insurance compared to private insurance. In October last year, the Obama administration itself confirmed insurance premiums for a midlevel benchmark plan will increase an average of 25% across the 39 states served by the federally run online market before taxpayer-provided subsidies.

“We’re not going to have one-size-fits-all,” Mr. Trump told the group, which also included the vice president and HHS Secretary Tom Price. “Instead, we’re going to be working to unleash the power of the private marketplace to let insurers come in and compete for your business. And you’ll see rates go down, down, down, and you’ll see plans go up, up, up. You’ll have a lot of choices. You’ll have plans that no one’s even thinking of today.”

Regarding the score, House Speaker Paul Ryan, R-Wis., told CBS News’ “Face the Nation” on Sunday he expected that CBO would predict some Americans would lose coverage.

“The one thing I’m certain will happen is CBO will say, ‘Well, gosh. Not as many people will get coverage,’” Ryan said. “You know why? Because this isn’t a government mandate. This is not the government that makes you buy what we say you should buy and therefore the government thinks you’re all going to buy it.”

Meanwhile, President Trump will head to Kentucky to hold a campaign-style event next Monday in Louisville to rally support for repeal and replace. Vice President Mike Pence appeared in the Bluegrass State last Saturday to put the pressure on legislatures to support the plan. Worth noting, Kentucky Sen. Rand Paul has been one of the most vocal conservative opponents to the American Health Care Act, the ObamaCare repeal bill put forward by House Republican leadership.

“The House leadership Obamacare Lite plan has many problems. It will not pass,” Sen. Paul tweeted. “Conservatives are not going to take it.”

Still, the president remains optimistic about the bill’s chances of passing both houses of Congress. He tweeted early Monday, “Republicans will come together and save the day.”