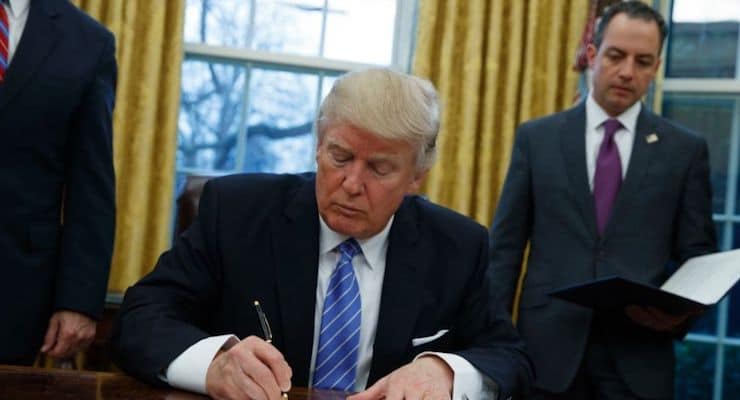 President Donald Trump signs an executive order to withdraw the U.S. from the 12-nation Trans-Pacific Partnership trade pact agreed to under the Obama administration, Monday, Jan. 23, 2017, in the Oval Office of the White House in Washington. (AP Photo/Evan Vucci)

President Donald J. Trump signed an executive order directing the Office of Management and Budget to submit a plan to reorganize and streamline the executive branch. The Presidential Executive Order on a Comprehensive Plan for Reorganizing the Executive Branch gives OMB Director Mick Mulvaney 180 days to look at ways “to improve the efficiency, effectiveness, and accountability of federal agencies, and even to eliminate or reorganize unnecessary or redundant federal agencies.”

“Our moral duty to the taxpayer requires us to make our Government leaner and more accountable,” President Trump said in a statement after signing the order.

The Trump Administration cited a April 2016 report by the Government Accountability Office (GAO) that concluded the Executive Branch under former President Barack Obama and Congress failed to fully address a majority of the Government fragmentation, overlap, and duplication identified by the GAO. The White House also said the order instructs Director Mulvaney to publish a notice in the Federal Register inviting the American public to suggest their own improvements.

“Implementing this executive order would have a de minimis impact on costs and revenues to the Federal Government,” Director Mulvaney said in a statement. “The benefits of this executive order include the development of a detailed plan to modernize the Federal Government and make it leaner, more effective, and more accountable by reorganizing, consolidating, and eliminating unnecessary components.”

By the authority vested in me as President by the Constitution and the laws of the United States of America, it is hereby ordered as follows:

Section 1.  Purpose.  This order is intended to improve the efficiency, effectiveness, and accountability of the executive branch by directing the Director of the Office of Management and Budget (Director) to propose a plan to reorganize governmental functions and eliminate unnecessary agencies (as defined in section 551(1) of title 5, United States Code), components of agencies, and agency programs.

(b)  The Director shall publish a notice in the Federal Register inviting the public to suggest improvements in the organization and functioning of the executive branch and shall consider the suggestions when formulating the proposed plan described in subsection (c) of this section.

(c)  Within 180 days after the closing date for the submission of suggestions pursuant to subsection (b) of this section, the Director shall submit to the President a proposed plan to reorganize the executive branch in order to improve the efficiency, effectiveness, and accountability of agencies.  The proposed plan shall include, as appropriate, recommendations to eliminate unnecessary agencies, components of agencies, and agency programs, and to merge functions.  The proposed plan shall include recommendations for any legislation or administrative measures necessary to achieve the proposed reorganization.

(d)  In developing the proposed plan described in subsection (c) of this section, the Director shall consider, in addition to any other relevant factors:

(i)    whether some or all of the functions of an agency, a component, or a program are appropriate for the Federal Government or would be better left to State or local governments or to the private sector through free enterprise;

(ii)   whether some or all of the functions of an agency, a component, or a program are redundant, including with those of another agency, component, or program;

(iii)  whether certain administrative capabilities necessary for operating an agency, a component, or a program are redundant with those of another agency, component, or program;

(iv)   whether the costs of continuing to operate an agency, a component, or a program are justified by the public benefits it provides; and

(v)    the costs of shutting down or merging agencies, components, or programs, including the costs of addressing the equities of affected agency staff.

(e) In developing the proposed plan described in subsection (c) of this section, the Director shall consult with the head of each agency and, consistent with applicable law, with persons or entities outside the Federal Government with relevant expertise in organizational structure and management.

Sec. 3.  General Provisions.  (a)  Nothing in this order shall be construed to impair or otherwise affect:

(i) the authority granted by law to an executive department or agency, or the head thereof; or

(ii) the functions of the Director relating to budgetary, administrative, or legislative proposals.

(b) This order shall be implemented consistent with applicable law and subject to the availability of appropriations.

(c) This order is not intended to, and does not, create any right or benefit, substantive or procedural, enforceable at law or in equity by any party against the United States, its departments, agencies, or entities, its officers, employees, or agents, or any other person.