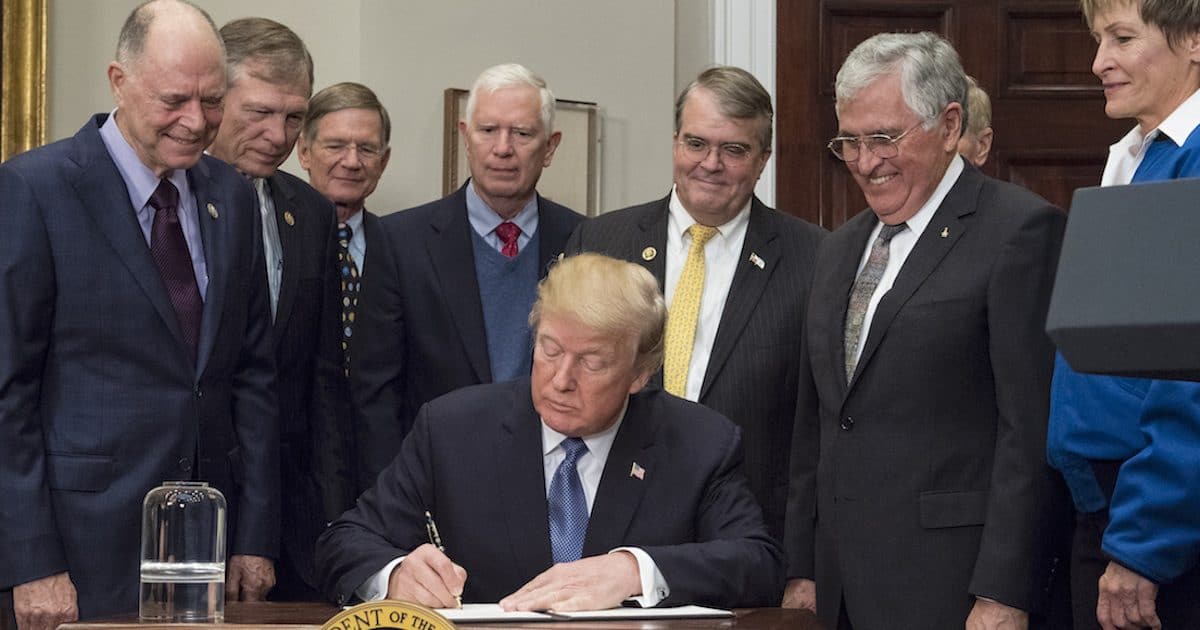 Administrator Bridenstine: “We Are Going” to the Moon and Mars

President Donald Trump’s fiscal year (FY) 2020 budget amendment aims to land Americans on the South Pole of the Moon by 2024, and to establish a sustained presence by 2028. It is the latest supportive act in the Trump Administration’s ambitious effort to revamp national space exploration.

NASA Administrator Jim Bridenstine addressed employees in a video on Monday, highlighting how President Trump supports accelerated plans to land astronauts on the Moon by 2024.

“This investment is a downpayment in NASA’s efforts and will allow us to move forward with design, development and exploration,” Administrator Bridenstine said. “Additionally, we envision strong commercial partnerships that will help increase innovation and reduce costs to the American taxpayer.”

He thanked employees for their dedication that has “pressed us on to the Moon and forward to Mars.”

While it hasn’t received much media attention, President Trump has established himself as a consequential figure in space exploration. In his first 100 days, he signed the National Aeronautics and Space Administration Transition Authorization Act of 2017.

The focus on space exploration and defense is part of the “America First” agenda. In December 2017, President Trump signed Space Policy Directive-1, establishing a public-private partnership for human missions to the Moon, Mars and beyond.

As a result, NASA said they can send “astronauts to the Moon and then on to Mars, in a measured, sustainable way.” The directive builds on NASA’s Space Launch System rocket and Orion spacecraft, increases commercial partnerships, and cooperative work with international partners at the International Space Station in low-Earth orbit.

Administration Bridenstine said the additional $1.6 billion demonstrates President Trump has “extended his vote of confidence” in the progress NASA has made thus far.

In May 2018, President Trump signed Space Policy Directive–2, which reforms U.S. commercial space regulatory framework with a goal to ensure the nation maintains its role as a leader in space commerce.

In February 2019, he signed Space Policy Directive-4 instructing Secretary of Defense Patrick M. Shanahan (acting) to develop a legislative proposal establishing the U.S. Space Force as the sixth branch of the Armed Forces.

As you know, the President has given our agency the bold challenge to land the next American on the lunar South Pole by 2024. And now President Trump has extended his vote of confidence in our work with an amended budget request for fiscal year 2020. It includes $1.6 billion in additional funding. This investment is a downpayment in NASA’s efforts and will allow us to move forward with design, development and exploration. Among other things, it will allow us to accelerate development of the Space Launch System and Orion. It will support the development of a human lunar landing system and it will support precursor capabilities on the lunar surface, including increased robotic exploration of the Moon’s polar regions. While there are many steps ahead in the budget appropriations process, all of us at NASA should be very proud and excited by this unique opportunity. Our efforts will include new work at NASA centers to provide key technologies and scientific payloads for the gateway and lunar surface, adding to efforts that are already underway all across our country. Additionally, we envision strong commercial partnerships that will help increase innovation and reduce costs to the American taxpayer. I challenge you, the NASA family, to share with your family and friends how investment over 60 years in our agency has improved the human condition through science, exploration and innovation. Exploring the Moon is the next step in our agency’s story and it will be to the benefit of all of us. We are at a moment of opportunity, together.