Texas Abortion Law Upheld, Law ‘Does Not Impose An Undue Burden’ On Women 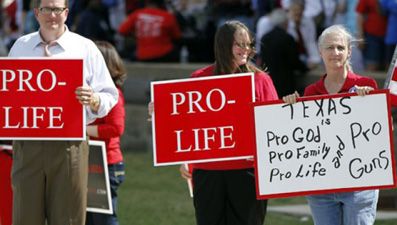 A federal appeals court on Thursday upheld the recently passed Texas abortion ban, which pro-abortion activists claim placed harsh restrictions that closed many of the abortions clinics in the state.

The New Orleans-based 5th Circuit Court of Appeals overturned a lower court federal judge who decided the rules violated the U.S. Constitution and served no medical purpose. However, in their opinion, the appeals court said the law “on its face does not impose an undue burden on the life and health of a woman.”

Texas lawmakers last year passed restrictions on when (no late-term abortion after 20 weeks), where (only in facilities where doctors have access to hospital facilities and meet health standards) and how women may obtain an abortion. The Republican-controlled state legislature required abortion doctors to have admitting privileges at a nearby hospital and placed limits on doctors’ abilities to offer abortion-inducing pills late in the pregnancy.

Most Republican leaders in Texas oppose abortion, except in cases where the life of the mother is at risk. Following the public trial of Doctor Kermit Gosnell, who ran a house of horrors abortion clinic in Philadelphia, Republicans argued they needed to take action to protect the health of the woman.

Yet abortion-rights supporters, particularly Planned Parenthood and The Center for Reproductive Rights, two organization who make a great deal of money through the abortion industry, claimed the measures were an attempt to stop abortions in Texas through overregulation. Because many abortion doctors do not have admitting privileges, they are limited on when and where they may prescribe abortion-inducing pills, which supposedly discourages women from choosing that option (they argue).

Other aspects of the new abortion laws, including a requirement that all procedures take place in a surgical facility, do not take effect until September.

U.S. District Judge Lee Yeakel ruled in October that the provisions place an unconstitutional burden on women’s access to abortion.

Three days after Yeakel’s ruling, the 5th Circuit allowed Texas to enforce the law while the state appealed the decision. At least a dozen Texas abortion clinics closed after the law took effect.