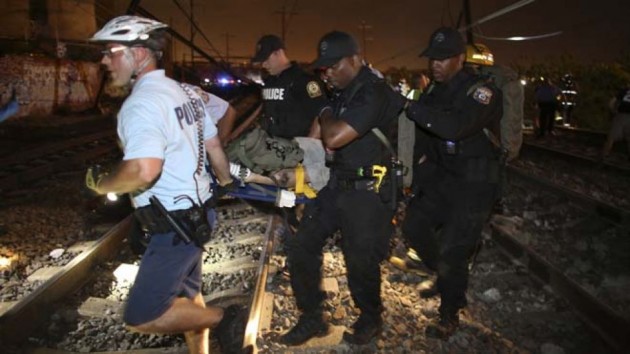 As many as six more people remain critically injured, some were unaccounted for and more than 140 more riders were being evaluated and treated at local hospitals, as federal investigators were on scene to determine what caused the accident. (Photo: AP/ Joseph Kaczmarek)

The Amtrak crash near Philadelphia Tuesday night has claimed its 7th life Tuesday as two reports claim the train was traveling over 100 mph around a 50-mph turn. Authorities confirmed Wednesday that they have recovered the black box from the train and are currently inspecting video footage recorded from the front of the train just moments before it derailed.

Amtrak and city authorities estimate that 238 passengers and five Amtrak employees were on the Northeast Regional Train 188 that was traveling from Washington, D.C., to New York City, when it went off the rails at about 9:30 p.m. local time. In addition to killing seven thus far, the crash sent over 200 to area hospitals and as many as six more people remain critically injured, However, Dr. Herbert Cushing, the chief medical officer for Temple University Hospital, said at a press conference late Wednesday he expected their condition to improve.

Citing two people with knowledge of the investigation, a report from the The Wall Street Journal claimed the Amtrak train and its passengers were traveling at more than 100 miles an hour as it approached a sharp curve, a speed twice the limit in the section. Further, The Associated Press analyzed surveillance video from the train also taken just before the crash and estimated that the train was speeding along at 107 mph.

According to Dr. Cushing, the majority of the trauma suffered rib fractures, collapsed and punctured lungs, indicating to him that the passengers were flung violently around within the rail cars. Passengers traveling in the rear of the train were up and talking, according to the doctor, but those in the front were in far worse condition.

Robert Sumwalt, a board member at the National Transportation Safety Board (NTSB), said a team at the scene is studying the track, train signals, operations of the train and the condition of the train, itself, to determine more of the facts in the accident. Mr. Sumwalt said the train’s recorders have been sent to Delaware for analysis and will provide investigators with views from a forward-facing camera, the speed of the train and information as to whether the brakes were ever engaged at any point.

The engineer, who received medical treatment, will make a statement to the Philadelphia Police Department, Mayor Michael Nutter said at the Wednesday morning press conference.

Meanwhile, former Congressman Patrick Murphy of Bucks County, was a passenger on the train during the crash. He said that his rail car flipped over, but he escaped with minor cuts and bruises. Mr. Murphy preceded to roll up his sleeves and help firefighters and other first responders at the scene.

Sen. Tom Carper, D-Del., was also on the train but got off in Wilmington before the train derailed outside of Philadelphia.

Another Amtrak train crashed on Sunday. That train, bound for New Orleans, struck a flatbed truck at a railway crossing in Amite, La., killing the truck’s driver and injuring two people on the train.

In March, at least 55 people were injured when an Amtrak train collided with a tractor-trailer that was stuck on the tracks in North Carolina.