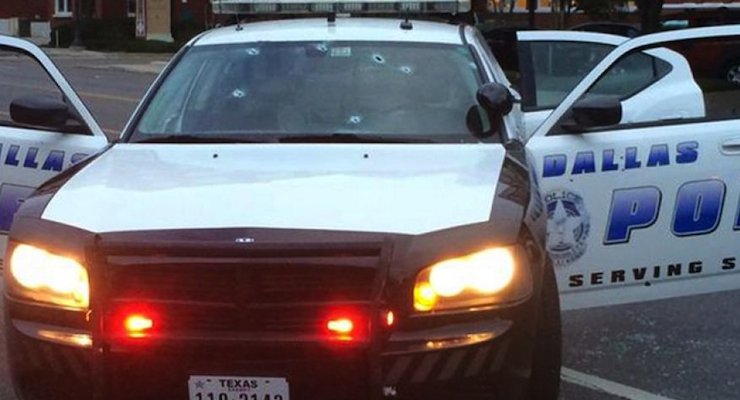 Multiple gunmen armed with automatic weapons fired on police officers outside Dallas Police headquarters around 12:30 a.m. Saturday morning before fleeing in an armored van. The suspects began leading police on a chase that ended in a standoff in the parking lot of a Jack in the Box at 121 South Interstate 45 Service Road in Hutchins at approximately 12:44 a.m., where a gun battle with officers ensued.

Witnesses noticed the suspects parked in front of headquarters, but when officers arrived the suspects rammed a Dallas Police squad car and began shooting at officers. While the rounds repeatedly struck the squad cars, police officials say no officers were harmed in the attack.

Police also confirmed finding two explosive devices, with one bomb robot picking up a bag at Jack Evans with pipe bombs that subsequently detonated. The Explosives Ordinance Detonation Unit investigated four suspicious bags in total left in front of Dallas Police Headquarters, but law enforcement officials say all known suspicious packages have been cleared and nearby residents were evacuated as a precaution.

Brown said the suspects refused to surrender and SWAT team negotiators were brought in to talk to the suspects.

The suspect gave a name to police, identifying himself as James Boulware, who is a white male, 5’10”, 200 pounds.

“This the name given, however it has not been confirmed that this is the person we are talking to,” Brown said.

Brown said the suspect driving the van has told officers that he blames police for losing custody of his son and “accusing him of being a terrorist.” The gunman also said he had explosives in the van, which was outfitted with gun ports in the sides.

Brown said, based on witness accounts, as many as four suspects may have been involved in the original shooting, including some who may have been positioned at elevated positions. However, police say conflicting witness accounts made it difficult to immediately determine how many shooters were involved.

Police are currently attempting to disarm and disable the exposives that they believe to be pipe bombs inside the vehicle and have had no contact with the other known suspect in a number of hours.