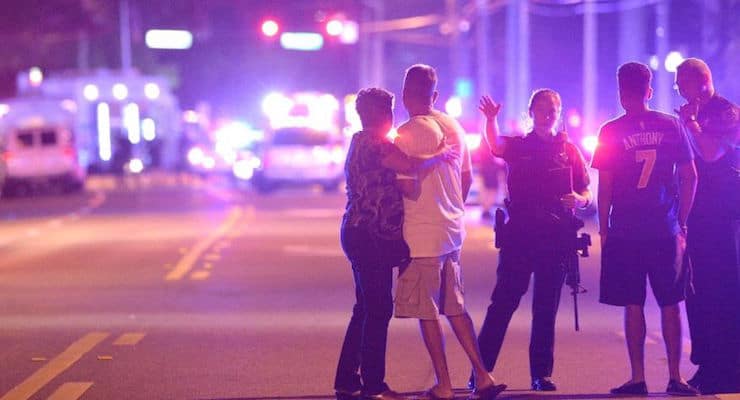 Orlando Police officers direct family members away from a multiple shooting at a nightclub in Orlando, Fla., on June 12, 2016. (Photo: AP)

BREAKING: The Islamic State (ISIS) has claimed responsibility for the attack at the gay nightclub Pulse in Orlando, Florida, which left at least 53 dead and another 53 injured. The group immediately claiming responsibility for an attack is a bit out of character, but multiple officials have told People’s Pundit Daily publicly and privately that the shooter did in fact have ties to the terror group.

ISIS claimed responsibility for the attack Sunday afternoon through its Amaq news agency, but it is not yet clear whether the shooting was actually directed by the terror organization or inspired by it. The declaration comes hours after a social media account known to belong to a senior Islamic State jihadist, which is monitored by PPD, quickly congratulated and celebrated the attack.

However, intelligence officials no longer find the distinction between the two significant. House Intelligence Committee Ranking Member Rep. Adam Schiff, R-Calif., said in a statement to PPD that the details of the attack indicated “an ISIS-inspired act of terrorism.”

“The fact that this shooting took place during Ramadan and that ISIS leadership in Raqqa has been urging attacks during this time, that the target was an LGBT night club during Pride, and – if accurate – that according to local law enforcement the shooter declared his allegiance to ISIS, indicates an ISIS-inspired act of terrorism,” Rep. Schiff said. “Whether this attack was also ISIS-directed, remains to be determined. I’m confident that we will know much more in the coming hours and days.”

Omar Mateen, 29, the Muslim U.S. citizen born to Afghan parents, “was on the radar before” he opened fire in a gay nightclub in Orlando, killing at least 53 people. A senior law enforcement source told People’s Pundit Daily that Mateen was twice a person of interest in terror-related investigations, once in 2013 and again 2014.

Sen. Bill Nelson, D-Fla., said at a press conference on Sunday that intelligence committees believe Mateen, who was born in New York, had ties to Islamic State, or ISIS. He stressed that the information did not come from the FBI before trashing identity politics.

Seddique Mateen, the shooter’s father, is allegedly running for office in Afghanistan. He said his son was angered recently when he saw two men kissing.

“We are saying we are apologizing for the whole incident. We weren’t aware of any action he is taking,” Seddique said. “We are in shock like the whole country,” he said, adding that the attack “has nothing to do with religion.”

The attack now marks the deadliest single-person mass murder in American history. Prior to Orlando, the worse occurred in Bath, Michigan in 1927, when a man bombed a school, killing 44 people.

Man Arrested in Route to Gay Pride Parade in California