HomeNewsSatanic Temple Gets OK for After-School Club for Elementary Kids

Satanic Temple Gets OK for After-School Club for Elementary Kids 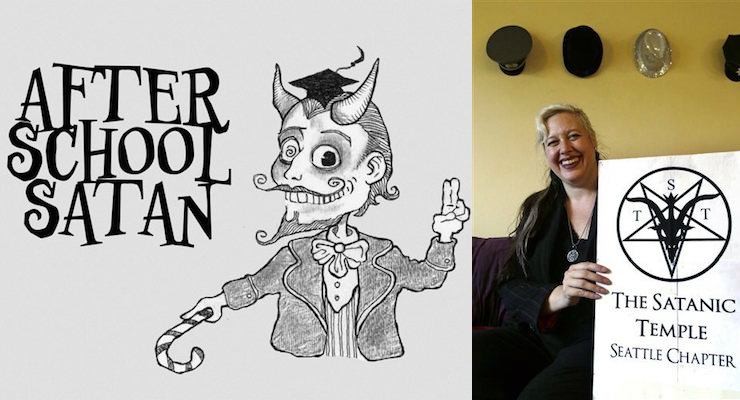 If this isn’t proof positive of the demise of America, then what is? The Portland chapter of the Satanic Temple – a reference that’s significant in itself, as it shows a plurality and therefore, growth of organized Satanism in America – has just won an accommodation from school officials to offer an after-school club for children.

It’s called the “After School Satan Club.” How nice. It’s aimed at attracting the elementary-age crowd.

Beginning Oct. 19, Sacramento Elementary School will open doors to the satanic activity, which is being billed as lessons “on science and rational thinking,” according to one of the temple’s local chapter heads, Finn Rezz.

Rezz kindly explained to the Oregonian it’s not that the members of the Satanic Temple are truly Satanists, worshiping some sort of spiritual or supernatural entity of the dark side. Rather, he went on, most are simply atheists who view Satan “as an allegory for free thought,” the newspaper said.

The club is solely to foster in its participants a sense of “benevolence and empathy for everybody,” Rezz said.

He also said the After School Satan Club is intended to provide students an option to the “Good News Club,” a get-together arranged by the Child Evangelism Fellowship – a Bible-based group – that’s allowed to meet at the school once a month.

As if the two groups are morally equivalent.

This is the Child Evangelism group’s stated mission, on its webpage: “Child Evangelism Fellowship is a Bible-centered, worldwide organization composed of born-again believers whose purpose is to evangelize boys and girls with the Gospel of the Lord Jesus Christ, disciple them in the Word of God and establish them in a Bible believing church for Christian living. We are committed to helping local churches and individuals evangelize children.”

By comparison, the Satanic Temple touts its mission, on its own website, as “facilitate[ing] the communication and mobilization of politically aware Satanists, secularists, and advocates for individual liberty.” The Satanic Temple also promises to “undertake noble pursuits guided by the individual will.” Really?

Note to Satanic Temple: Have you considered a Marketing 101 class?

But here’s a free thought observance – the Satanic Temple’s name is what it is because it aptly describes all that flows from its members and missions.

Wake up, America. This battle for the soul of our nation – which used to be clearly stated, taught and believed as a country where individual rights come from God, not government – is growing more intense. And the enemy is not only disguising its true intent, cloaking its wickedness in a guise of free thought and with a cloak of kindness – it’s setting sights on the youngest, most malleable minds of all: the children.

And it’s doing it in a way that Satan himself would be proud: by taking a truth and twisting it just enough to cause chaos and confusion – by citing the First Amendment’s religious freedom clause and demanding an equal access to the Christian groups. The end result is predictable: Local governing authorities, afraid of lawsuits, cave to the Satanic Temple’s demands.

Local citizens, even those of faith, ultimately bite their tongues and shake their heads, unsure how to fight off such logical, law-based demands. And atheists, progressives and others with similar mindsets who want nothing more than to tear down the Judeo-Christian fabric of America’s founding and usher in a secular society that breeds contempt for all-things-traditional, moral and virtuous, rub hands with glee, fueled by yet another chink in the nation’s faith-based armor.

Well, here’s a message to mull: Two roads diverged in a yellow wood – one leading down a path of acceptance, conciliation, regret and loss and the other, down a path of bold and righteous indignation, brutal fights to the finish, glory for God, and honor to both individual and nation.

Which to choose? That, dear Christian and fellow patriot, will make all the difference.