The Euro model (ECMWF) forecasts Hurricane Michael to make landfall at the Florida Panhandle and Big Ben along the U.S. Gulf Coast on Wednesday. The model above tracks over a 240-hour period beginning the morning of Tuesday, October 9, 2018.

The consensus for the models anticipates Michael will strengthen to a Category 3 Major Hurricane.

Alabama Governor Kay Ivey issued a statewide State of Emergency on Monday that went into effect at 3:00 PM CST.

A Tropical Storm Watch is in effect from the Alabama-Florida border to the Mississippi-Alabama border, and Suwanee River Florida to Chassahowitzka Florida.

The Tropical Storm Warning for the Cuban province of Pinar del Rio has been discontinued. 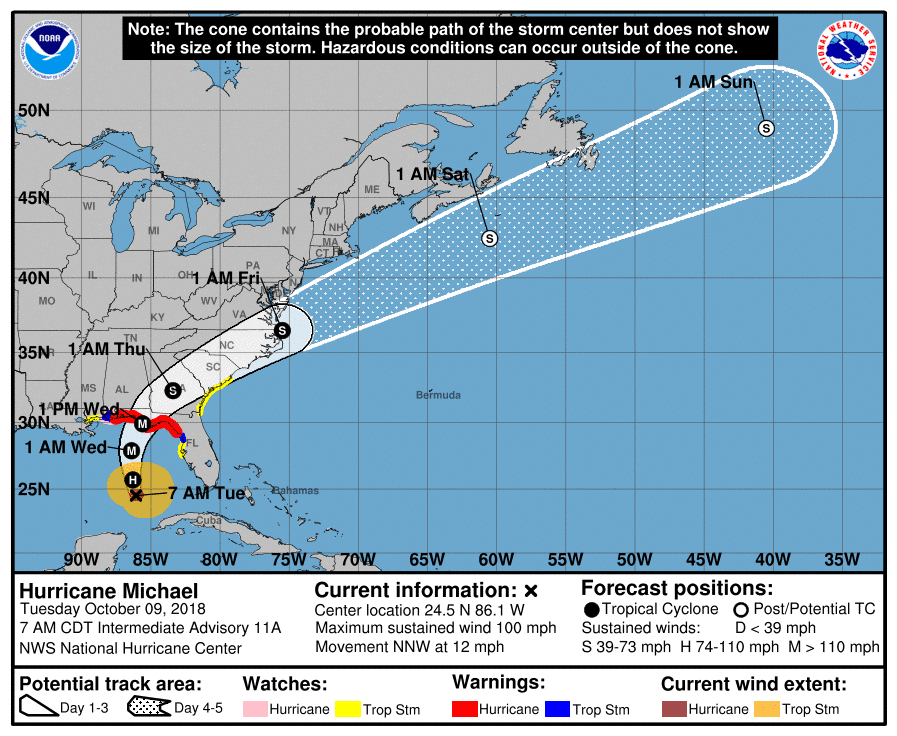 The National Hurricane Center (NHC) said the reconnaissance aircraft indicate maximum sustained winds increased to near 100 mph (155 km/h) with even higher gusts. It’s forecast to strengthen from a steady to rapid pace over the next 24 hours or so. Michael is forecast to become a major hurricane by Tuesday night.

The latest minimum central pressure reported by the NOAA aircraft is 968 mb (28.58 inches).

A northward to north-northwestward motion at a slightly faster forward speed is expected through Tuesday night, followed by a northeastward motion on Wednesday and Thursday. On the forecast track, the center of Michael will move over the southeastern Gulf of Mexico tonight, then move across the eastern Gulf of Mexico Tuesday and Tuesday night. The center of Michael is expected to move inland over the Florida Panhandle or Florida Big Bend area on Wednesday, and then move northeastward across the southeastern United States Wednesday night and Thursday.