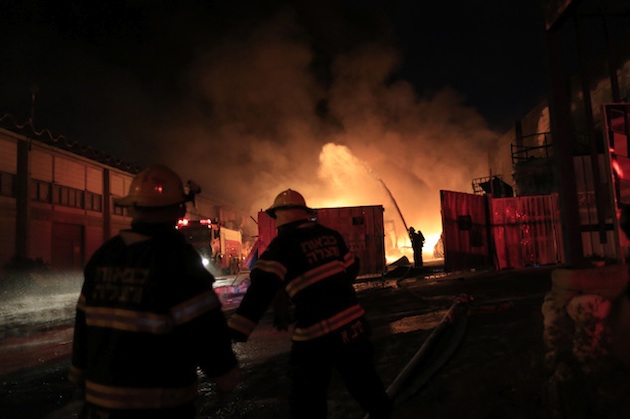 Israeli firefighters try to extinguish a burning factory hit by a rocket fired by Palestinian militants from the Gaza Strip in the southern Israeli town of Sderot, Saturday, June 28, 2014. (AP Photo/ Tsafrir Abayov)

Israeli troops are building up on its border with the Gaza Strip after a night of Hamas-fired rockets hitting at least one residential neighborhood. IDF officials confirmed Thursday that 18 rockets have hit southern Israel since midnight, including two lobbed on residential buildings in Sderot.

While there were no injuries, one of the buildings hit was used as a nursery for infants. The Iron Dome anti-rocket system intercepted two of the rockets — one over Ashkelon and another over Netivot — but others fell in open areas. The Eshkol region was hit nine times, which prompted the Israel Air Force to conduct an attack on a mortar-launching cell in southern Gaza, which was successful.

The fighting began earlier this week when the bodies of three kidnapped teenagers — one of which was also a U.S. citizen — were found in a shallow grave in the West Bank. The three youths disappeared as they were heading home from a West Bank religious school. Israeli officials said at the time that one of the teens called a police emergency line around 10:25 p.m. and said, “We’ve been kidnapped.” Unfortunately, they were not heard from again.

Israeli Prime Minister Benjamin Netanyahu had promised to make Hamas pay, claiming there was overwhelming evidence that the terrorist group was behind the attack. Even Sec. of State John Kerry said last week that it appears from U.S. intel reports that Hamas was behind the kidnapping.

“Hamas terrorists carried out Thursday’s kidnapping of three Israeli teenagers,” Netanyahu said earlier this month. “We know that for a fact. Hamas denials do not change this fact.”

The abductions outraged the Jewish state as well as their allies in the international community, resulting in Palestinian President Mahmoud Abbas condemning the abduction on June 16. However, Netanyahu said he would hold the Palestinian Authority responsible for any harm that would come to the teenagers, because Abbas has not only failed to reign in the violence but aligned with many elements of the group to stay in power. In fact, in early June Abbas formed a unity government that has the backing of Hamas.

Outrage broke out in Israel almost immediately after news of the shallow grave discovery hit the airwaves, resulting in an apparent revenge killing of an Arab teen in Jerusalem. The suspected revenge killing gave Hamas another reason to escalate the violence.

Five mortar shells were fired on Tuesday evening from the Gaza Strip toward southern Israel, landing in the Eshkol Regional Council. The timing was ill-advised to say the least, as Tuesday’s attack came during the funeral in Modi’in for the three kidnapped and subsequently murdered Israeli teenagers.

Early on Tuesday morning, the Israeli Air Force jets responded by hitting 34 targets in the Gaza Strip. Now, the situation has escalated into a Israeli military buildup, including tanks and heavy artillery on a scale not seen since late 2012.