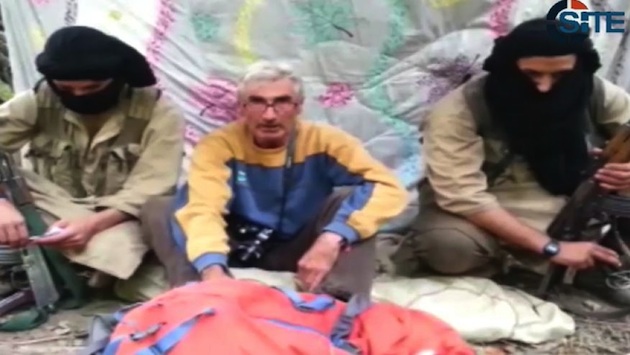 French President Francois Hollande confirmed Wednesday that an Islamic extremist group beheaded a French hostage as retaliation for airstrikes against ISIS fighters in Iraq. Jund al-Khilafah, or Soldiers of the Caliphate, had said they would kill the French mountaineer after abducting him Sunday unless France ended its participation in the bombing campaign within 24 hours.

Herve Gourdel — a 55-year-old mountaineering guide from Nice — was abducted in the Djura Djura mountains of northern Algeria on Sunday during a hiking trip. The remote mountainous region may be a mountaineers paradise, but it is also a known stronghold of Islamist extremists in northern Algeria.

Despite Algerian forces sending in helicopters and special forces to comb the region for Gourdel, only his Algerian companions were found because the terrorist kidnappers released them on their own authority.

Hollande condemned the killing of Gourdel and said France would continue its fight against ISIS, the Sunni Islamic terrorists that have taken over large pieces of territory within the once-sovereign borders of Iraq and Syria. Terrorism watchdog SITE Intelligence Group distributed a video by Jund al-Khilafah Wednesday reporting the death of Gourdel, but Hollande responded later in the day. The group said the video had been posted on Twitter.

In the video, masked gunmen pledged their allegiance to the leader of ISIS, Abu Bakr al-Baghdadi. They not only cited the French attacks in Iraq, but also France’s intervention targeting radical Islamists in Mali, as well.

“Herve Gourdel is dead because he is the representative of a people – ours – that defends human dignity against barbarity,” Hollande said, speaking along the sidelines of the U.N. General Assembly meeting in New York. “My determination is total and this attack only reinforces it. We will continue to fight terrorism everywhere.”

The video resembled those showing the beheadings of two American journalists, James Foley and Steve Sotloff, as well as the British aid worker, but rather than depicting speeches of President Barack Obama or Prime Minister David Cameron, the video instead depicted Hollande.

“Our values are at stake,” French Prime Minister Manuel Valls said Wednesday after hearing about the video. However, whose values Valls shares may not be that cut and dry.

Despite the fact that France is only 5-10 percent Muslim, a VOX poll conducted last month found at least 15 percent of French people said they have a positive attitude toward ISIS and the share of ISIS supporters is largest among France’s younger generation, a bloc gaining in Muslim proportion.

Meanwhile, the leader of the largest French Muslim group, Dalil Boubakeur, claimed to find “this barbaric crime” horrifying and supposedly condemns it “with the utmost energy.” The group has called for other imams to denounce the terror army in the past, but a growing anti-Semitic and anti-West radicalism still grows despite these so-called efforts.

On Gourdel’s Facebook page, viewers can see he had expressed an eery excitement about his camping trip and said he was looking forward to being shown around for a change, instead of being the guide. Sadly, that never happened.