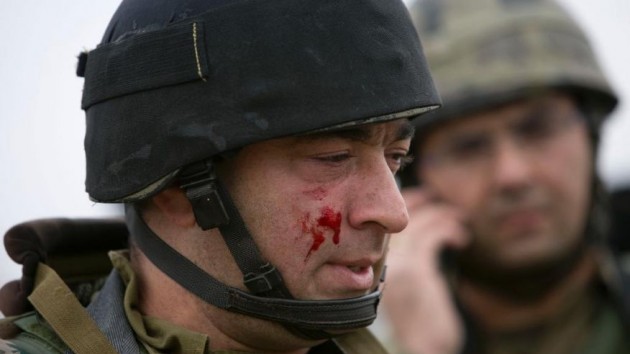 An Israeli officer was injured by a stone from Palestinian protesters following a prayer for Palestinian Cabinet minister Ziad Abu Ain, who collapsed shortly after a protest on Dec. 10 in the West Bank village of Turmus Aya, as they clash with the troops near the village outside of Ramallah, Friday, Dec. 19, 2014. Clashes erupted between Palestinian protesters and Israeli forces at a West Bank military checkpoint near Turmus Aya, where Abu Ain collapsed and later died en route to hospital. Palestinian and Israeli pathologists subsequently disagreed over the cause of Abu Ain’s death. The Palestinian expert said the cause of death was a “blow,” while his Israeli colleague said Abu Ain died of a heart attack. (AP Photo/Majdi Mohammed) (The Associated Press)

JERUSALEM –  The Israeli military confirmed a rocket was fired from the Gaza Strip into southern Israel on Friday, in the first such attack since September. Officials say the projectile — that set off air raid sirens in the Eshkol region — landed in an open field, causing no injuries or damage.

Israel fought a 50-day war just this past summer with the Islamic militant group Hamas, which controls Gaza. In repeated violations of previously agreed upon cease-fires, Hamas launched thousands of rockets and mortars deep into Israel, which responded by carried out an aerial campaign and a ground invasion first aimed at “ending Hamas rockets once and for all,” but expanded in scope when a vast and sophisticated network of terror tunnels dug from Gaza under Israel were discovered.

Examinations of the structures found Hamas was using the very concrete supplied by Egypt, Israel, the U.S., and the U.N. for the construction of schools and infrastructure. In the end, the war left more than 2,100 Palestinians dead, according to Palestinian and U.N. officials, while the Israelis lost 66 soldiers and six civilians. If not for the Iron Dome missile defense system, the death toll would have been much higher among the Israeli military and civilian populations.

Palestinian protesters clashed with Israeli forces Friday at a West Bank military checkpoint and also near the village of Turmus Aya, but no injuries reported. The village was the site of a Palestinian-Israeli scuffle earlier this month during which Palestinian Cabinet minister Ziad Abu Ain collapsed. He later died en route to hospital.

Of course, Palestinian and Israeli pathologists disagreed over the cause of Abu Ain’s death. The Palestinian expert said the cause of death was a “blow,” while his Israeli colleague said Abu Ain died of a heart attack.

Meanwhile, Egyptian officials are still weighing whether to build a wall along their border with Gaza as they continue to destroy terror tunnels Hamas uses to conduct attacks and kidnappings. The plan was advanced in late October after a horrific terrorist attack in northern Sinai resulted in the death of 33 Egyptian soldiers.

On another note, the Israeli military on Friday relaxed travel restrictions for Palestinian Christians in the West Bank and Gaza Strip in observance of the Christmas holiday season, stating it granted 700 permits for those living in Gaza to travel to Israel, the West Bank and Jordan. Israel said it was also allowing West Bank Christians to travel to Israel, claiming they approved 500 of them to visit their families in the Gaza Strip, subject of course to security checks.

The army also said it would also expand the working hours at military checkpoints to allow pilgrims from around the world faster access to the West Bank city of Bethlehem during Christmas.