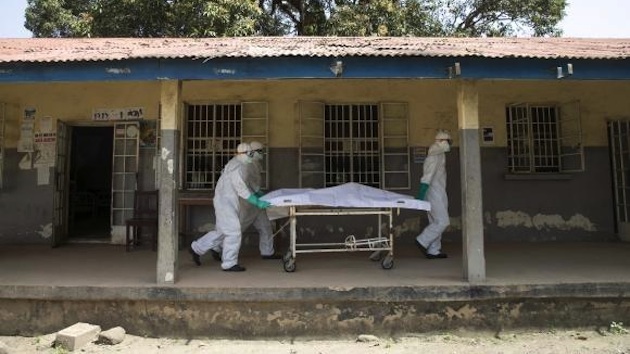 Health workers push a gurney with a dead body at a Red Cross facility in the town of Koidu, Kono district in Eastern Sierra Leone December 19, 2014. (Photo: REUTERS/BAZ RATNER)

The Ebola death toll from the three worst-affected countries in West Africa has risen to 7,373 among 19,031 cases known to date there, the World Health Organization said on Saturday.

The latest data posted on the WHO website shows nearly 500 new deaths from the worst ever outbreak of the hemorrhagic fever in Guinea, Liberia and Sierra Leone.

Sierra Leone accounts for the most cases, 8,759, juxtaposed to 7,819 for Liberia. But Sierra Leone’s death toll of 2,477 is far less than 3,346 recorded in Liberia, leading some experts to question the credibility of the figures reported by Freetown.

“This is a medical war my country is fighting and I believe that the only way to stop this disease is for us, health practitioners, to come on board. We need to identify all sick people and take them out of the community as soon as possible,” said medical student Stephen Kamara.

President Ernest Bai Koroma said on national television that travel between all parts of the country had been restricted as part of “Operation Western Area Surge,” which was launched this week by the Government of Sierra Leone, supported by World Health Organization (WHO) and many other partners to intensify efforts to curb the spread of Ebola disease in urban and rural areas surrounding Freetown.

Sierra Leone’s leading doctor, Victor Willoughby, died of Ebola on Thursday, hours after the arrival in the country of an experimental drug that could have been used to treat him, the government’s chief medical officer said. Now, public gatherings are to be strictly controlled in the run-up to Christmas.