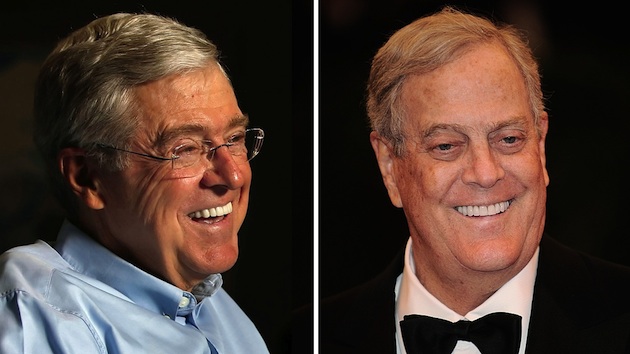 Lots of people sure hate the Koch brothers.

The Kochs get death threats like this: “If I had a chance to murder a Koch brother in cold blood, I would surely take it.”

Jim Dean doesn’t want to kill the Kochs, but he does want new laws to limit their influence. Dean’s brother Howard was a Democratic presidential candidate, and Dean chairs a group called Democracy for America.

“Get money out of politics,” Dean says on my show this week.

But Dean’s not just unhappy because the Kochs have money to throw around. He doesn’t like their politics.

“The Koch brothers are poster boys for everything that is wrong in politics because they spend so much,” he says, and they have extreme goals like “getting rid of Social Security and environmental laws.”

But they don’t. They just think today’s environmental laws go too far, and they want to save Social Security from going broke.

Dean says Social Security “has been one of the best social programs we’ve ever had.” When I point out that it’s unsustainable, he says, “The math works for another 20 years.” Wow. 20 years.
If the Kochs’ views were the same as George Soros’, I don’t think liberals like Dean would complain as much. But Dean claims he’s no hypocrite.

“We don’t like it when Democrats play the same game. Rahm Emanuel, mayor of Chicago … is giving away taxpayer-owned assets in the city to big businesses whose principals funded his campaign.”

It is disgusting when big shots use their money to get handouts from government — ethanol subsidies, limits on sugar imports, loan guarantees for Boeing or special deals from Rahm Emanuel. That’s government helping well-connected rich people, handing them money that once belonged to taxpayers.

But the Kochs aren’t like that. The brothers made their billions by growing their businesses. That’s a good thing. That’s real wealth creation, jobs for people and products people want.

The Kochs oppose subsidies, even for their own company. They’d get rid of them if everybody else would.

I should disclose that I’ve spent time with both David and Charles Koch. They’ve paid me to speak at a few of their events. I happily took the money and gave it to charities.

But anyone who understands libertarianism knows I’d agree with the Kochs even if I’d never met them. They are pro-immigration, anti-drug war. They want less defense spending. They got praised by Attorney General Holder for their campaign to jail fewer people.

Why is the left so mad at them? It’s definitely not because they’re the only big spenders in politics.

During the last presidential election, it was reported that the Kochs spent $60 million. Tom Steyer, the big environmental activist, spent $70 million a few years later.

I wish libertarians could just pay the government to shrink. But that’s not going to happen soon.

The unions, unlike the Kochs, promote economic ignorance. They push rigid hiring rules, limits on firing lazy workers, “buy American” campaigns, taxes on imports and other ideas that stifle growth. They push inefficiency on a grand scale, and politicians usually go along.

But last month, I was surprised when New Jersey governor Chris Christie vetoed a bill that would have required public contractors to buy American. He wrote, “these bills will simply drive up the price of doing business, and threaten job creation. Building economic walls around our state … will not improve the lives of our citizens.” Right.

Christie is no libertarian, but maybe he attended an economic literacy seminar sponsored by the Kochs.

Since unions spend big to get politicians to outlaw smart, efficient business decisions, I’m glad when people like the Koch brothers come along to spread the message that government should spend less and get out of the way.

I wish the Kochs spent more on politics. They promote a message we don’t hear often enough.

A Racial Slur And Second Chances