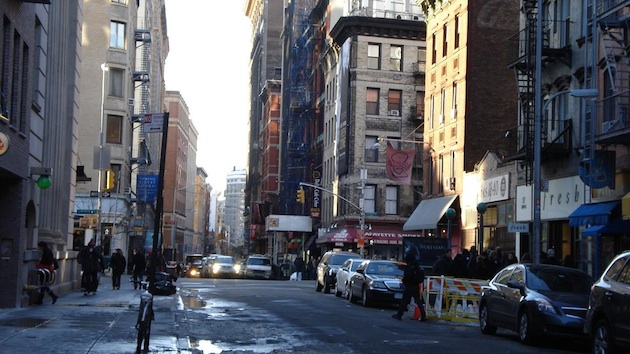 SoHo in New York City is the archetypal example of inner-city regeneration and gentrification.

No matter what you do, modern liberals will tell you you’re wrong.

For decades, liberals complained that American society is segregated because rich, white people don’t want to live in ethnically mixed neighborhoods. Sometimes, liberals had a point.

From the 1930s to 1960s, as rich white people moved into New York City, urban planner Robert Moses got city bureaucrats to condemn and destroy busy black neighborhoods. The city called the neighborhoods “blighted” and moved many of the poor into rent-subsidized apartment complexes called “projects.” Many quickly became slums.

Now times have changed. Some rich, white people want to move into poorer, non-white neighborhoods because they like diversity (and cheaper real estate). So today the newcomers are attacked by liberals because they cause “gentrification.”

Movie director Spike Lee, who lives in Brooklyn, said gentrifiers behave almost like “Columbus and kill off the Native Americans.” Of course, the new gentrifiers don’t actually kill anyone, but because their arrival often leads to rising real estate values, critics complain that they drive poor people out of the neighborhood.

Two women in Brooklyn got so angry about it, they pulled out a gun, forced two white people out of an apartment and moved in (they were later arrested).

Columbia urban planning professor Stacey Sutton calls gentrification a “manifestation of inequality” that may “fundamentally alter the culture and character of the neighborhood” in ways that hurt the poor.

Yet her own school did something worse. Columbia colluded with politicians to use eminent domain law to take pieces of the Harlem neighborhood that surrounds Columbia. In court, the school argued that it had the right to take neighbors’ land because it would “benefit West Harlem.”

Who owns the land is something that ought to be decided not by government but by free people making their own decisions about where they wish to live. When gentrification happens that way, spontaneously, price rises are often accompanied by drops in crime, new job opportunities and better connections to the rest of the culture. What the left calls “gentrification” is often called “improvement” by people who live there.

Another Columbia urban planning professor, Lance Freeman, found to his surprise that gentrification didn’t even mean significant displacement of the previous population. In his book “There Goes the ‘Hood,” Freeman writes, “poor residents and those without a college education were actually less likely to move if they resided in gentrifying neighborhoods.”

That’s because gentrification often means the neighborhood gets safer and more interesting. That’s something the old residents enjoy as much as new ones.

That doesn’t stop some people — often rich, white liberals — from complaining that gentrification destroys the quaintness of the neighborhood. They sound almost like the people who think that the developing world should never be sullied by modern technology. Actually, sometimes the same people make both arguments.

In San Francisco, some longtime residents got so angry about Google employees moving in that they surrounded Google employee shuttle buses, waving protest signs.

It’s a fight between hippies and tech geeks, with the hippies calling for regulations to prevent change. Such regulations have perverse effects, however. They lead to long waits for building permits and subsidies for housing that end up getting used by the well-connected and rich.

When regulation makes it harder to build or to alter old buildings, the effect is higher costs and reduced choices, which only makes things harder for the poor. Regulation saves some old things people like, but those people will never even know what new things they missed out on.

If nothing like gentrification ever happened in the world, we all still would be living in the same caves our ancestors lived in thousands of years ago. I say, let free people keep transforming the neighborhood.