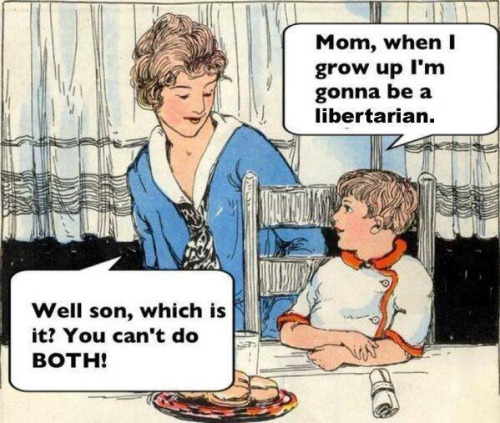 After writing about such an emotionally charged issue yesterday, let’s change the topic and enjoy a bit of levity.

I’ve shared several examples of anti-libertarian humor, most of which are fairly clever because they seize on something that is sort of true and take it to the preposterous extreme.

Here’s something with a different flavor. It basically mocks libertarians for being naively idealistic youngsters who then “grow up” and stop being libertarian. There’s enough truth to this that I laughed, though I think the trait of being overly idealistic probably applies to all politically minded young people.

I remember thinking “let’s abolish Social Security overnight” in my younger years, whereas now I think we need to transition to a system of personal retirement accounts.

Is this a sign that I’ve “grown up” and that I’m no longer libertarian, or is it simply a recognition that progress sometimes has to be incremental if we want to achieve libertarian goals?

I think the latter, so I don’t think the image is accurate. But it’s still funny.

Though I guess it’s only pro-libertarian by process of elimination because it describes what it’s like when people other than libertarians are in charge of government policy.

And since there’s plenty to criticize when looking at both Republicans and Democrats, you can see why this is appealing.

Now let’s close with some humor produced by libertarians. The always-clever crowd at Reason TV snagged an interview with President Obama. Sort of, keeping in mind that this video was released on April 1.

I especially like the jabs at Biden at the end.

And since I shared my collection of Obama jokes at the bottom of this recent post, let’s take this opportunity to recycle (and re-enjoy) these examples of Biden humor.

We have this caption contest, which led to a clever winning entry.

Here’s an amusing joke (with the naughty word redacted), and the late-night talk shows have produced some good one liners about the Veep here, here, here, and here.

And let’s not forget the laughs we all enjoyed when he asserted that paying higher taxes was patriotic.

Last but not least, Biden is (in)famous for his self-defense advice and he also featured in a few of these amusing posters.

Indiana And The Constitution