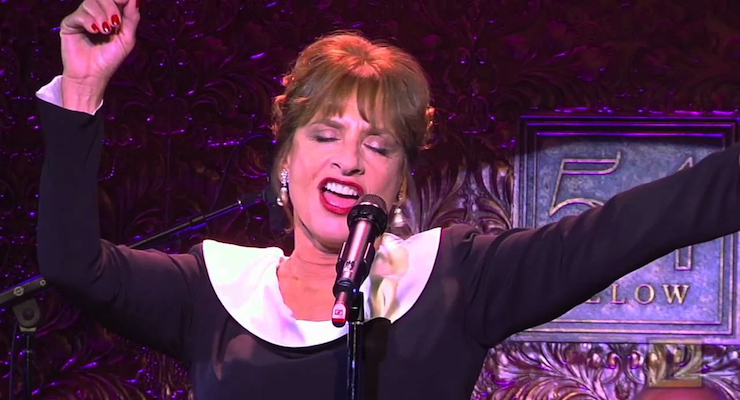 Broadway legend Patti LuPone after returning to 54 Below to perform her solo show Far Away Places. (Photo: Broadway.com)

Broadway star Patti LuPone made headlines recently when she grabbed a cellphone from a woman texting in the second row. It may have helped that she was in character, playing a tough-broad diva from a community theater.

The play, “Shows for Days,” was being performed at Lincoln Center, where generations of mostly well-mannered audiences have gone for live performances. The texter’s orchestra-section ticket could not have been inexpensive.

Are mobile devices rewiring some of our brains? That is, are certain audience members unable to recognize that the figures onstage, whether acting or playing the violin, are not pixels but living, breathing humans capable of hearing and seeing what we in the audience are doing?

Also not to be dismissed were the other theatergoers trying to focus on the drama onstage but distracted by a neighbor’s tapping on her little flashing screen. That might be regarded as bad form even at movie theaters where serious works are shown.

A new rash of bad audience behavior may have any number of causes. One could be, as suggested above, an inability to distinguish between what happens on screens and what occurs in real life. It may be a collapse in basic manners or ignorance of what the rules are — especially in regard to digital natives, for whom live theater might seem retro without irony.

Consider the case of Nick Silvestri. Before a show began, the 19-year-old jumped on the stage at the venerable Booth Theatre and tried to plug his cellphone into an electrical outlet. Adding a dash of (SET ITAL) opera buffa (END ITAL) to the story — look it up, Nick — the outlet was a fake, part of the scenery.

Bizarre as his action may have seemed, it was impossible not to forgive Silvestri after his charming apology. Promoters of the show, “Hand to God,” sensing perhaps both a teachable moment and a shot at some free publicity, held a news conference outside the theater, starring Silvestri and his explanations.

The young man noted that his judgment may have been clouded by a few pre-theater drinks. His contention that he doesn’t “go to plays very much” was easy to believe. “I didn’t realize that the stage is considered off-limits” sounded more of a stretch.

For brazen misbehavior, a recent incident at a theater in Washington, D.C., beats them all. It happened during a performance of “The Fix,” a musical at the Signature Theatre. A drunken woman from the audience sauntered onto the stage, searching for a ladies’ room, and then staggered backstage just as the star was about to make her entrance.

“There she was,” Christine Sherrill told The Washington Post, “kind of loudly asking me where the bathroom was.”

At that point, another audience member walked through a curtain leading to the backstage and told the workers there that she also needed a restroom. The crew escorted both women to the lobby. They soon took off from the theater.

The last example did not directly involve a mobile phone device, but you have to wonder: Had these women’s personal boundaries been blunted by a life attached to screens on which all kinds of urges are loosed without consequence? It can’t just have been the booze. No amount of alcohol would prompt most ladies, for example, to break a storefront window.

Clearly, some members of today’s audiences can’t appreciate that there are human beings on the stage communicating with them. They might consider quarantining themselves before a flat screen at home, where no one would care whether they are singing along, texting or sitting on the toilet.