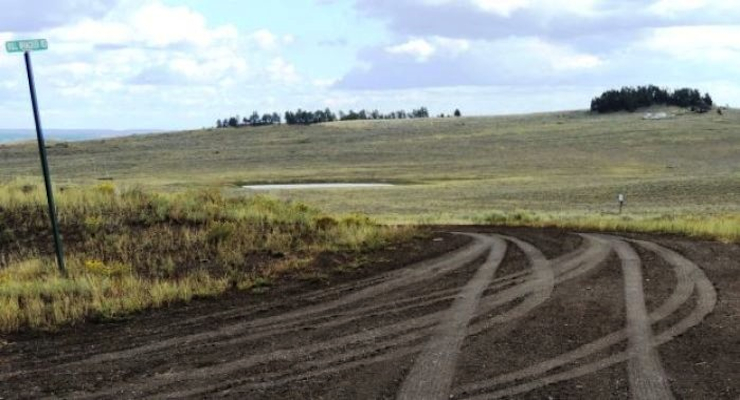 Access to 50,000 acres of BLM land via the Bullwhacker Road, shown here, in Blaine County has been at the center of a proposed land exchange between the Wilks brothers and the BLM. (Photo: BLM/Billings Gazette)

The Durfee Hills contain some of the finest elk hunting grounds in Montana. Some 2,700 acres of this majestic country is open to sportsmen, courtesy of the land’s owner, the United States government.

But “no trespassing” signs could sprout if two rich Texans succeed in persuading the federal government to give them the hills in return for another chunk of land on their 360,000-acre spread — a parcel providing the only road access to 50,000 public acres along the Upper Missouri River. Both federal properties are overseen by the Bureau of Land Management.

If they prevailed, the Wilks brothers would create a world-class private hunting preserve the size of a small European country. This is not an isolated case. A lot of open space is closing around Montana, Wyoming and throughout rural parts of the West as billionaires and developers vie to shut out the public.

They are getting a helpful push from conservative politicians demanding that Washington dispose of the huge amount of federal land it owns, especially throughout the West. Though these politicians routinely declare love of hunting — all but posing with a moose draped over their shoulders — they are in effect calling for the closing of the land used by 72 percent of Western hunters.

Republicans in the U.S. Senate, meanwhile, recently passed a nonbinding budget resolution calling on the federal government to dispose of all its land other than national parks and monuments, which are almost entirely off-limits to hunting.

“A lot of politicians are making the claim that these lands are worthless, when in reality these are the lands that matter the most to the average sportsman,” Joel Webster of the Theodore Roosevelt Conservation Partnership, a group of environmental-minded hunters and anglers, told me.

In a doubled double cross to hunters, the National Rifle Association backs the politicians wanting to close off the land to public sportsmen. Some hunters have told me that they refuse to be NRA members.

The Wilks brothers can play hardball. Their N Bar Ranch surrounds the Durfee Hills, so hunters must fly in, and they do. The brothers put a fence around the BLM land, depriving hunters of the elk that graze on their ranch property.

And they posted armed guards on the old road leading to the Missouri River, a road that was open until 2011. (They’re now allowing temporary public access, perhaps to ease local anger.)

“If the BLM caves in,” said Don Thomas, a Montana-based outdoors writer, “it will establish a dangerous precedent that could eventually spell the end to public land hunting and fishing throughout the West.”

Some of the politicians tell the sportsmen that federal land taken over by states would be kept open to hunting. That’s nonsense, Webster said.

Most state constitutions require that state lands be managed for profit. In Colorado, for example, 80 percent of state land is closed to hunting. You can’t even walk your dog there.

This is the scenario if the land were transferred to the states: The states would immediately complain that there’s no money for maintaining it — and raising taxes is against their religion.

“What happens next,” Webster said, “is the states identify which lands have the most industrial potential. Then they’ll sell the prime real estate lands — the lands with lakefronts and mountain basins — to billionaires and developers. That’s how you maximize profit, right?”

About 640 million acres — mostly BLM, U.S. Forest Service and U.S. Fish and Wildlife Service land — is in the crosshairs. Western hunters had better counter this movement to curb federal land ownership — or they may no longer be Western hunters.