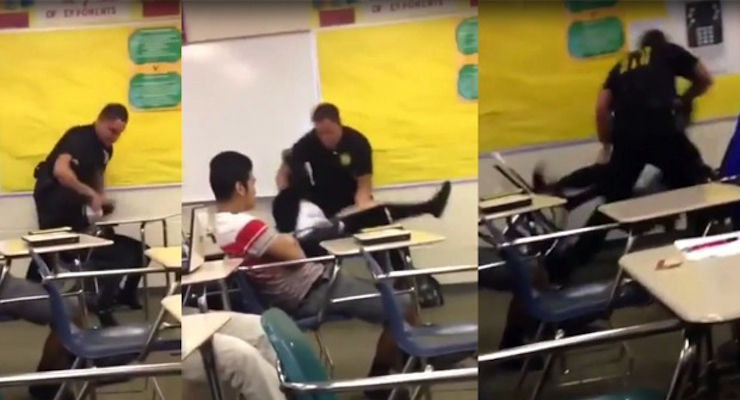 South Carolina Deputy Ben Fields, 34, physically takes down a 16-year-old high-school student after she failed to get off her cell phone as instructed.

A recent, widely publicized incident in which a policeman was called to a school classroom to deal with a disruptive student has provoked all sorts of comments on whether the policeman used “excessive force.”

What has received far less attention, though it is a far larger question, with more sweeping implications, is the role of disruptive students in schools.

Critics of charter schools have often pointed to those schools’ ability to expel uncooperative and disruptive students, far more readily than regular public schools can, as a reason for some charter schools’ far better educational outcomes, as shown on many tests.

The message of these critics is that it is “unfair” to compare regular public schools’ results with those of charter schools serving the same neighborhoods — and often in the same buildings. This criticism ignores the fact that schools do not exist to provide jobs for teachers or “fairness” to institutions, but to provide education for students.

“Fairness” is for human beings, not for institutions. Institutions that are not serving the needs of people should either be changed or phased out and replaced, when they persistently fail.

Despite the painfully bad educational outcomes in many public schools in ghettos across the country, there are also cases where charter schools in the very same ghettos turn out students whose test scores are not only far higher than those in other ghetto schools, but sometimes are comparable to the test scores in schools in upscale suburban communities, where children come from intact families with highly educated parents.

Charter schools with such achievements should be celebrated and imitated, not attacked by critics because of their “unfair” exemptions from some of the counterproductive rules of the education establishment. Maybe such rules should be changed for all.

If the critics are right, and getting rid of the influence of uncooperative or disruptive students contributes to better educational results, then the answer is not to prevent charter schools from expelling such students, but to allow other public schools to remove such students, when other students can benefit from getting a better education without them around.

This is especially important in low-income minority schools, where education is for many their only chance for a better life.

Back in the supposedly bad old days, before so many people became so politically correct, there were schools and other institutions that were basically dumping grounds for students who endangered the education — and often even the safety — of other children.

Yet a front-page story in the New York Times last week dealt with how Success Academy, a high-performing charter school network in New York City’s low-income and minority neighborhoods, has been accused of “weeding out weak or difficult students.”

The Times’ own story opens with an account of a child who was “not following directions,” who “threw tantrums,” was screaming, threw pencils and refused to go to another classroom for a timeout. Yet the headline declared that charter schools “Single Out Difficult Students.”

“Singled out” usually means treating someone differently from the way others are treated for doing the same things. Are convicted criminals “singled out” when they are sent to jail?

The principal of a Success Academy school in Harlem was accused of telling teachers “not to automatically send annual re-enrollment forms home to certain students, because the school did not want those students to come back.”

A mother in Brooklyn complained about her son’s being suspended repeatedly, and her being called repeatedly to come to school to pick him up early. She admitted that he was “hitting, kicking, biting and spitting at other children and adults.”

After he was transferred to another public school, “he was very happy and had not been suspended once.” How happy others were to have him in their midst was not reported.

It would be wonderful if we could develop ways to educate all students, despite whatever kinds of attitudes and behavior they had. But how many generations of other youngsters are we prepared to sacrifice to this hope that has never yet been fulfilled?

Poor Women Should Be Able to Choose Surrogate Motherhood

Are Procrastinators Poor Planners or Victims of Overwork?