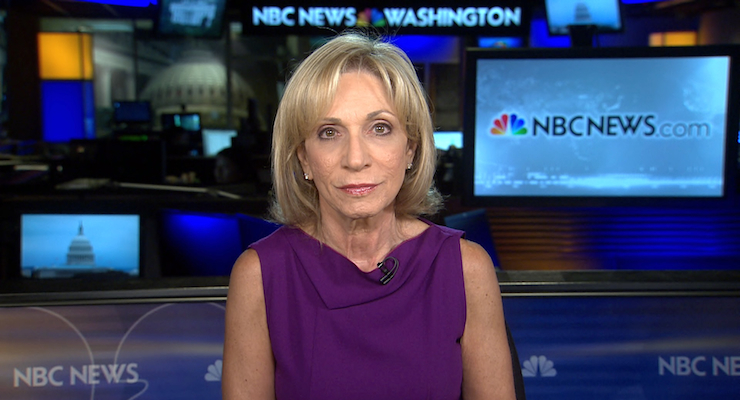 On NBC’s “Meet the Press” Sunday, Andrea Mitchell accused Republican presidential candidate Donald Trump of divisiveness. Trump’s alleged divisiveness aside, this is rich from an acolyte of the most divisive president in history, Barack Obama.

Mitchell was referring to Trump’s disputed claim that thousands of American Muslims celebrated the terrorist attacks on our soil on 9/11. Mitchell said: “It’s not only that the facts are wrong. It’s that what he is saying is so emotionally and politically powerful. He is lighting fires. He is turning people against people…. The kinds of facts that he is misstating are so … incendiary.”

Divisiveness and incendiary rhetoric don’t seem to bother Mitchell much when coming from Obama. She is so blinded by her adoration that she described his gauche selfie with two foreign heads of state during Nelson Mandela’s memorial service in South Africa as “great” and a “human moment.” She was visibly stunned when former New Hampshire Gov. John Sununu called Obama “lazy” and “disengaged,” and she asked him whether he wanted to apologize for his remarks.

This double standard from Mitchell and most of the rest of the liberal media is palpable. Obama’s penchant for partisanship and polarization was apparent from the beginning, yet Mitchell and her cohorts not only ignored it but also actively protected him.

After Obama had been in office for only a few months, the Pew Research Center reported that “for all of his hopes about bipartisanship, Barack Obama has the most polarized early job approval ratings of any president in the past four decades.”

Nor was this a misleading, isolated snapshot, as Gallup reported Jan. 25, 2010, that Obama had been the most polarizing first-year president in its poll’s history.

Obama has been the opposite of post-racial, repeatedly denouncing America’s blemished history and exuding resentment toward America’s record on race. He also decries America’s income inequality and what he wrongly perceives as its colonialism and imperialism. He has relentlessly trafficked in identity politics.

He has shown little patience for opposing viewpoints, routinely mischaracterized Republican positions, demeaned Republicans as liars and insisted that they shut up, get out of the way and let him handle the mess he “inherited.” He told one radio host that he needed people in Congress who wanted to cooperate. “And that’s not Republicans,” he said. “Their whole agenda is to spend the next two years trying to defeat me, as opposed to trying to move the country forward.”

He said he didn’t want Republicans to do a lot of talking but preferred they sit in back of the car. He called congressional Republicans “hostage takers” for opposing his tax policies. He told Latinos that people who believe in protecting America’s borders “aren’t the kinds of folks who represent our core American values.” He tried to energize Latino voters by saying on Univision that Latinos must not sit out the 2010 congressional elections but must tell themselves, “We’re going to punish our enemies, and we’re going to reward our friends who stand with us on issues that are important to us.”

During an interview with the Rev. Al Sharpton, Obama fully agreed with Sharpton’s suggestion that blacks needed to vote in 2010 as if Obama were on the ballot, because the midterm election was about his agenda. Obama likewise told a Philadelphia audience that Republicans were “counting on young people … and union members … and black folks staying home.” He didn’t forget to play the gender card, as well, sending Vice President Joe Biden to a fundraiser in Philadelphia, where Biden compared Republicans to those who excuse rapists by blaming their victims.

Obama even showed his partisanship at a high-school back-to-school speech in Washington, D.C. He also derided Republicans as lazy Slurpee sippers who stand around doing nothing while Democrats struggle valiantly to improve the economy. He said Republicans had driven the car into the ditch but wanted the keys back. “You can’t have the keys back,” he said. “You don’t know how to drive.” At a campaign stop in Ohio, he portrayed those in the GOP as villains from “Star Wars.” “They’re fighting back,” he said. “The empire is striking back.”

Obama has been the first president in recent history to make it obvious that he cares about representing only certain coalitions and not all the American people. And this has not escaped the people’s attention. For example, in 2011, a Washington Post-ABC News poll showed that only 35 percent believed that Obama had helped race relations.

In recent years, Obama has gotten even worse, blaming every mass shooting on gun rights advocates and stoking the flames of racial division in his rants against law enforcement. He routinely impugns Republicans as slaves of special interests and donors with no allegiance to principle. Of congressional Republicans, he said, “Folks are more interested in scoring political points than getting things done.” He shows more contempt for Republicans than he does the Islamic State group. I could go on — for a long time.

But has Andrea Mitchell ever pointed out, much less complained about, Obama’s intentional divisiveness? Of course not, because divisiveness is just fine with liberals if it advances their shared leftist agenda.

To call them hypocritical would be far too mild.

Shopping Doesn't Have to Be a Drag