Of the 4,000-plus columns I’ve produced since starting International Liberty in 2009, two of the most popular posts involve semi-amusing stories that highlight the failure of socialism, redistributionism, and collectivism.

“The Tax System Explained in Beer” is the third-most-viewed post of all time, and “Does Socialism Work? A Classroom Experiment” is the fourth-most-viewed post. At the risk of oversimplifying, I think these columns are popular because they succinctly capture why it’s very shortsighted and misguided to have an economic system that punishes success and rewards sloth.

For those who want details, I have dozens of columns about real-world socialist failure, looking at both the totalitarian version in places like Cuba, China, Venezuela, and North Korea, as well as the majoritarian version in nations such as France, Italy, and Greece.

And for those that want to get technical, I even have several columns explaining that the pure version of socialism involves government ownership of the means of production (government factories, state farms, etc), whereas the “democratic socialism” in Europe is actually best viewed as extreme versions of redistributionism (while the pervasive interventionism favored by the left actually is a form of fascism).

Yet notwithstanding the horrible track record of every version of socialism, we actually have a presidential candidate in America who actually calls himself a socialist. Though, as pointed out by my colleague Marian Tupy in The Atlantic, he’s more of a redistributionist than a socialist.

Socialism was an economic system where the means of production (e.g., factories), capital (i.e., banks), and agricultural land (i.e., farms) were owned by the state. …Sanders is not a typical socialist. Sure, he believes in a highly regulated and heavily taxed private enterprise, but he does not seem to want the state to own banks and make cars. …Senator Sanders is not a proponent of socialism, and that is a good thing, for true socialism, whenever and wherever it has been tried, ended in disaster.

Here’s an article about real socialism by Mark Perry that’s more than 20 years old, but its analysis is just as accurate today as it was in 1995.

Socialism is the Big Lie of the twentieth century. While it promised prosperity, equality, and security, it delivered poverty, misery, and tyranny. Equality was achieved only in the sense that everyone was equal in his or her misery. …Socialism does not work because it is not consistent with fundamental principles of human behavior. …it is a system that ignores incentives. …A centrally planned economy without market prices or profits, where property is owned by the state, is a system without an effective incentive mechanism to direct economic activity. By failing to emphasize incentives, socialism is a theory inconsistent with human nature and is therefore doomed to fail.

Sanders holds massive events populated by kids who think what he is preaching is very cool. …When did it become acceptable for Americans to back an avowed socialist? …For Americans today, the visible and unmistakable connection between socialism and totalitarianism has faded dramatically. …For America’s young, socialism’s definition isn’t to be found in the desperate, sad reality of peoples held captive by regimes that proudly declare themselves socialist. It’s more of a vague ideal… This makes it easier for someone like Sanders to say that socialism just means middle-class entitlements… It is…Barack Obama…that we have to thank for socialism’s rise in 2016. Republicans…have been describing President Obama’s domestic program as socialist… The takeaway for today’s younger voters seems to be: If everything Obama is trying to do is socialism, …then perhaps we need to go full socialist to actually get things done.

The final part of the excerpt is very insightful.

Young people have no idea about the real nature of socialism.

Heck, they don’t even understand the modern-day failure of socialism in Venezuela or North Korea.

To them, socialism is simply bigger government.

Which is very offensive to people who actually have suffered under socialism. Garry Kasparov, the chess champion turned Russian dissident, doesn’t mince words in his response to the Sanders crowd. 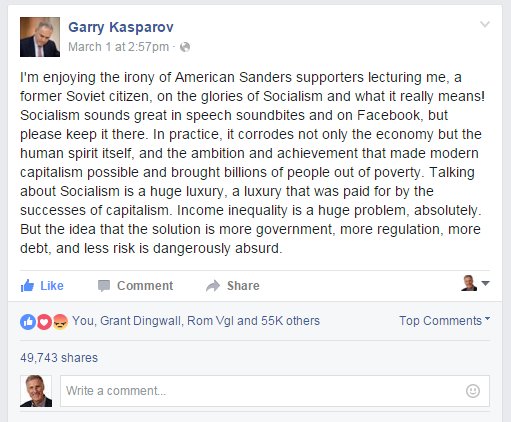 I’m guessing this bit of satire won’t be very popular with Bernie’s supporters.