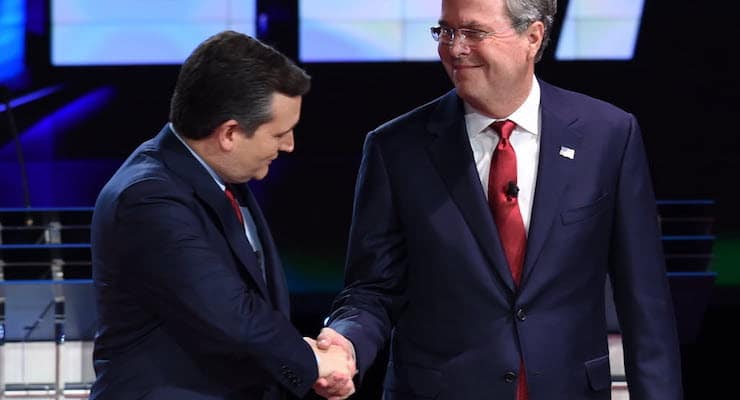 It is time to address the canard that endorsements for Sen. Ted Cruz from establishment Republicans damage his credibility as an outsider. It is opportunistic and lazy thinking.

As the Republican presidential race has narrowed, it is inevitable that the only two viable contenders remaining, Cruz and Donald Trump, will be receiving more endorsements. This is especially true this year because the seriousness of the threats facing the nation and the presence of strikingly unconventional candidates make this the most important election in decades. With the stakes so high, there will be more endorsements from people who under less dire circumstances would remain neutral.

Who would have guessed that Sen. Lindsey Graham or former Florida Gov. Jeb Bush would endorse Cruz? Graham quipped that if someone murdered Cruz on the floor of the Senate and were tried in the Senate, he’d be acquitted. Likewise, there has been no love lost between Cruz and the Bushes. And who would have dreamed former presidential nominee Mitt Romney would record robocalls for Cruz in Utah?

Will Cruz be perceived as selling out his principles if he accepts the endorsements or just remains silent?

Latter-day establishment foe Donald Trump suggested that the endorsements hurt Cruz and he wouldn’t want them himself. But Trump met with a few dozen Republican congressmen recently, and he carted the Obama-hugging Chris Christie to campaign events all around the nation on his jet. What Trump said or did yesterday, last week or last month, however, has little bearing on what he says or does today, and it matters little to his infinitely forgiving supporters.

As with so many other issues, Trump will get a pass because he is held to a different standard. He has been in bed with and funded establishment and leftist honchos throughout his career, but that’s irrelevant because he talks loudly and carries a big stick. He’s an “outsider” because he’s never held public office and he’s not a lawyer, though he has boasted about buying insider influence and has been involved in more litigation than most seasoned trial lawyers. Even Trump’s shallowness on policy detail seems to work to his advantage, as his unwavering admirers must assume it’s because he has no access to secret knowledge that is accessible only to the evil insiders he seeks to depose.

Though I am well aware that Cruz will be judged differently than Trump, I still believe he should accept such endorsements graciously and, in any event, should not reject them.

Why shouldn’t Cruz accept support from people he’s been fighting, as long as the support comes without strings attached that would require him to compromise his principles? The Cruz team should view this support as a vindication of its campaign and as an indication that his intraparty foes prefer him to the other candidates.

Predictably, Trump supporters are already claiming that these endorsements prove that Cruz is an insider and that Trump is not. If Trump were the insider, he’d be getting these endorsements, they say. Establishment Republicans are scared to death of Trump, they contend, because they wouldn’t be able to control him because he can’t be bought.

But does that really pass the smell test? How many core beliefs does Trump have that are not negotiable? Trump has played footsie with them for years and has bragged that he’d be able to work with people but Cruz wouldn’t — “because no one likes Ted.” On the other hand, establishment types already know they can’t control Cruz, who has shown them, to their great distaste, that he won’t play establishment baseball with them.

Perhaps establishment Republicans are partially concerned that they wouldn’t have so much influence over the largely non-ideological Trump as they would over some politicians, but they know they’d have a much harder time seducing Cruz out of his core beliefs.

So, what are they so worried about with Trump? I don’t believe it has anything to do with his alleged outsider status or his policies, because they are just as concerned with Cruz’s as they are with Trump’s. Rather, it’s his perceived demeanor, his behavior, his stability and his radical unpredictability.

Even if they aren’t fans of Cruz personally, they know where he stands and they know what they’re getting with him. They know that he’s serious, that he would approach the presidency with deferential respect and that he is exceedingly knowledgeable and as capable as anyone has ever been to assume presidential power his first day in office. They know that he’s calm and steady and that he would not engage in erratic behavior. Even if Cruz is too conservative for their tastes, they believe he would conduct himself as an adult and not demean the office of the presidency.

Though establishment endorsements are finally coming Cruz’s way, he has not reciprocally endorsed the establishment or its centrist views in return. He remains true to his convictions, which is what matters.

Cruz has always maintained that he could reassemble the Reagan coalition by fiercely and clearly articulating the conservative message and that he wouldn’t have to drift to the center to win the general election. Yes, the nation’s demographics and culture have shifted, but Cruz conservatives believe that the majority of American voters are still receptive to an infectious conservative message if someone would finally present it enthusiastically.

We conservatives have always said that we believe in a big tent as long as we can build it without selling our political souls. So don’t fall for the nonsense that accepting endorsements necessarily compromises the endorsee. In the case of Ted Cruz, there is and will be no abandonment of principles, and I am confident that his establishment endorsers are more certain of that than anyone else. So I say to all of them, welcome aboard the Cruz Constitutional Express.