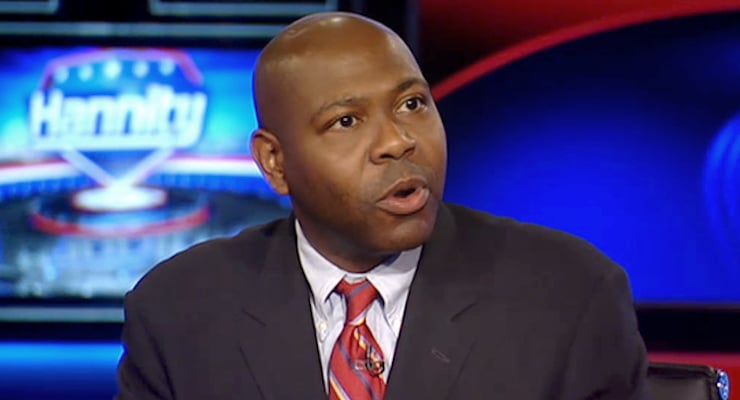 Jason Riley has now joined the long and distinguished list of people invited–and then disinvited–to give a talk on a college campus, in this case Virginia Tech.

Mr. Riley is a Senior Fellow at the Manhattan Institute, a columnist for the Wall Street Journal and, perhaps most relevantly, author of a very insightful book titled “Please Stop Helping Us: How Liberals Make It Harder for Blacks to Succeed.”

In short, Jason Riley’s views on race are different from the views that prevail on most college campuses. At one time, 50 years ago or earlier, exposing students to a different viewpoint was considered to be a valuable part of their education. But that was before academia — and the education system in general — became virtually a monopoly of the political left.

Today one can literally go from kindergarten to becoming a graduate student seeking a Ph.D., without ever hearing a vision of the world that conflicts with the vision of the left.
Conservative critics who object on grounds that the views of the left are wrong miss the point. Regardless of whose views become a monopoly, education suffers. John Stuart Mill understood this back in the middle of the 19th century.

As a young Marxist in college during the 1950s heyday of the anti-Communist crusade led by Senator Joseph McCarthy, I had more freedom to express my views in class, without fear of retaliation, than conservative students have on many campuses today.

After being invited by conservative students to give talks at various colleges, Jason Riley has then been surprised at how little those conservative students have said during the question and answer periods after these talks. But a Wellesley student explained: “You get to leave when you’re done. We have to live with these people until we graduate.”

Even liberal professors can be adversely affected by the narrow groupthink that prevails. Without an opposition to keep them on their toes, they can develop sloppy habits of dismissing or even demonizing differing viewpoints, instead of practicing and teaching their students how to come to grips with opposing beliefs.

A well-known Harvard professor, for example, recently referred to Justice Clarence Thomas by remarking: “He’ll say he pulled himself up by his own bootstraps. I say I was in the right place at the right time.”

It so happens that I first met Clarence Thomas back in 1978, when he was a young lawyer in Missouri. In all these years, I have never heard him say anything even resembling what has been blithely attributed to him by this Harvard professor.

On the contrary, Justice Thomas has attributed his good fortune to his grandfather who raised him, especially in his autobiography, “My Grandfather’s Son.”

When he was sworn in as a Justice of the Supreme Court, he brought the nuns who had taught him in school, down in Georgia, to the ceremony in Washington, at his own expense, to let them know that what they had done for him was appreciated, and had not been in vain.

It was much the same story when a faculty member at the University of California at Santa Barbara referred to economist Walter Williams as someone “committed to the welfare of the top few.”

It so happens that I have known Walter Williams since 1969. In all those years, I have never once known him to express the slightest concern for the welfare of rich people. But what I have seen repeatedly has been his expressing his concern for people who are poor, both in words and in deeds.

As an economist, Professor Williams knows that high tax rates on investors chase investments — and American jobs — overseas, where American working people cannot get those jobs. But, whether the academic in Santa Barbara agrees or disagrees with that analysis, it is no good for him, or for his students, to dismiss opposing views by misrepresenting them.

These are just a few samples of the intellectual and moral dry rot on the many campuses across the country where the groupthink of the left substitutes for education.

What Team Sanders Should Do Now