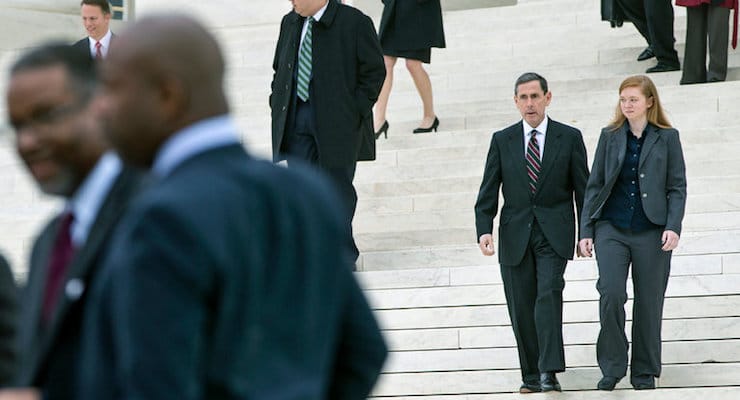 Abigail Fisher, right, with Edward Blum, director of the Project on Fair Representation, left the Supreme Court in Washington after oral arguments in her case last December. Her case argued the University of Texas, Austin, had denied her admission based on her race. (Photo: Associated Press)

Last week the Supreme Court of the United States voted that President Obama exceeded his authority when he granted exemptions from the immigration laws passed by Congress.

But the Supreme Court also exceeded its own authority by granting the University of Texas an exemption from the Constitution’s requirement of “equal protection of the laws,” by voting that racial preferences for student admissions were legal.

Supreme Court decisions in affirmative action cases are the longest running fraud since the 1896 decision upholding racial segregation laws in the Jim Crow South, on grounds that “separate but equal” facilities were consistent with the Constitution. Everybody knew that those facilities were separate but by no means equal. Nevertheless, this charade lasted until 1954.

The Supreme Court’s affirmative action cases have now lasted since 1974 when, in the case of “DeFunis v. Odegaard,” the Court voted 5 to 4 that this particular case was moot, which spared the justices from having to vote on its merits.

While the 1896 “separate but equal” decision lasted 58 years, the Supreme Court’s affirmative action cases have now had 42 years of evasion, sophistry and fraud, with no end in sight.

One sign of the erosion of principles over the years is that even one of the Court’s most liberal judicial activists, Justice William O. Douglas, could not stomach affirmative action in 1974, and voted to condemn it, rather than declare the issue moot.

But now, in 2016, the supposedly conservative Justice Anthony Kennedy voted to uphold the University of Texas’ racial preferences. Perhaps the atmosphere inside the Washington Beltway wears down opposition to affirmative action, much as water can eventually wear down rock and create the Grand Canyon.

We have heard much this year about the Supreme Court vacancy created by the death of the great Justice Antonin Scalia — and rightly so. But there are two vacancies on the Supreme Court. The other vacancy is Anthony Kennedy.

The human tragedy, amid all the legal evasions and frauds is that, while many laws and policies sacrifice some people for the sake of other people, affirmative action manages to harm blacks, whites, Asians and others, even if in different ways.

Students who are kept out of a college because other students are admitted instead, under racial quotas, obviously lose opportunities they would otherwise have had.

We do not have so many students with that kind of ability that we can afford to sacrifice them on the altar to political correctness.

Such negative consequences of mismatching minority students with institutions, for the sake of racial body count, have been documented in a number of studies, most notably “Mismatch,” a book by Richard Sander and Stuart Taylor, Jr., whose sub-title is: “How Affirmative Action Hurts Students It’s Intended to Help, and Why Universities Won’t Admit It.”

When racial preferences in student admissions in the University of California system were banned, the number of black and Hispanic students in the system declined slightly, but the number actually graduating rose substantially. So did the number graduating with degrees in tough subjects like math, science and engineering.

But hard facts carry no such weight among politicians as magic words like “diversity” — a word repeated endlessly, without one speck of evidence to back up its sweeping claims of benefits. It too is part of the Supreme Court fraud, going back to a 1978 decision that seemingly banned racial quotas — unless the word “diversity” was used instead of “quotas.”

Seeming to ban racial preferences, while letting them continue under another name, was clever politically. But the last thing we need in Washington are nine more politicians, wearing judicial robes.
[mybooktable book=”wealth-poverty-and-politics-an-international-perspective” display=”summary” buybutton_shadowbox=”true”]

The Streets Cannot Be a Home