HomeOpinionThe Streets Cannot Be a Home

The Streets Cannot Be a Home 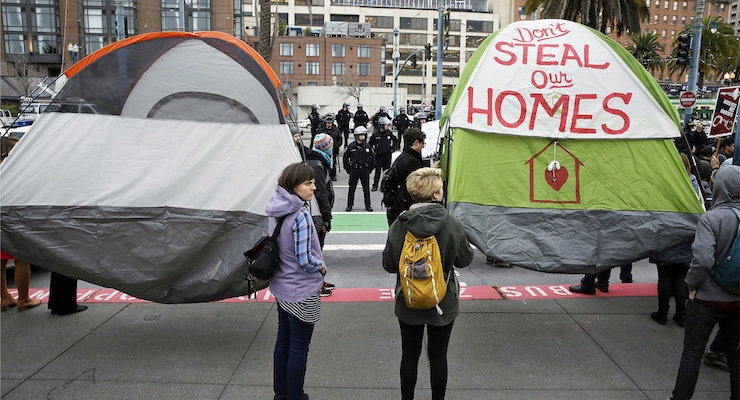 Demonstrators hold up tents during a protest to demand city officials do more to help homeless people outside the famed Ferry Building in San Francisco on Wednesday, Feb. 3, 2016.. (Photo: AP)

The homeless can be scary people. They may block sidewalks, curse passers-by and aggressively demand money. Or they can be just sad.

Growing homeless encampments are stressing cities across the country. Honolulu and Sarasota responded with stiff laws taking “vagrants” off the streets and out of public parks. South Carolina’s capital, Columbia, decided to give the homeless three choices. They can go to a shelter, get arrested or leave town.

Several approaches to dealing with this tough population are being tried. The wisest combine humane treatment with respect for the public’s right to use public space without having to step around bodies.
Some “advocates” oppose forcing the homeless off the streets. They accuse the new laws of “criminalizing homelessness” and trying to “hide poverty.”

What the advocates are doing, though, is turning the homeless into spectacle. Many are mentally ill, are addicted or have criminal records. They are not street theater.

One can’t ignore the reality that rising costs in hot housing markets have priced many locals out of their rentals. But as suggested above, the inability to find other accommodations is usually part of a larger constellation of personal problems.

Enlightened advocates applaud removing the homeless from the streets as a means of directing them to the services they need. Governments have an obligation to support such services.

An example. While recently waiting in a line at New York’s Port Authority Bus Terminal, I was hit by a harsh smell. Standing next to me was a disheveled man smiling sweetly. A social worker came by. She gently asked him whether he’d like to go with her and get cleaned up. He nodded, and they left together.

Of course, many of the homeless are far less docile. The infamous Jungle encampment in Seattle has become a scene of violence and other social mayhem. Law enforcement dreads going there.

That the homeless often prefer to live on the streets, as opposed to shelters, is not a reason to let them. Their objections range from hatred of rules to the inconvenience of being sent away every morning.

San Francisco has developed an interesting program to address some flaws in the shelter system. It created the Navigation Center as a kind of halfway house between a shelter and permanent housing. The “guests” can keep pets, store possessions and take showers. Case managers try to transition the residents into permanent housing while connecting them with health services, driver’s licenses and food stamps.

The Navigation Center has not been the perfect solution to the enormous challenge. Because its residents have been allowed to cut in line for permanent subsidized housing, the center has become wildly popular. The waiting list for admission is very long, and the most vulnerable people have the hardest time pushing their way in.

But this is how the homeless should be treated — with dignity and care but direction. Letting obviously dysfunctional humans live in their filth as a nod to some civil right is perverse. The Navigation Center concept is now being tried in Seattle, in New York and elsewhere.

There’s no point turning this into a class issue. Gentrification creates its own dislocations, for sure. But bringing jobs and tax dollars to downtowns with public transportation can’t help but provide a net benefit to those hurting economically.

Letting clusters — or virtual armies — of homeless people degrade the quality of civic life clearly serves no one. Fortunately, this is a problem that money can go a long way toward fixing. And that money must be found.

Can We Harness the Worldwide Populist Movement?