HomeOpinionHillary: Guilty as Not Charged

Hillary: Guilty as Not Charged 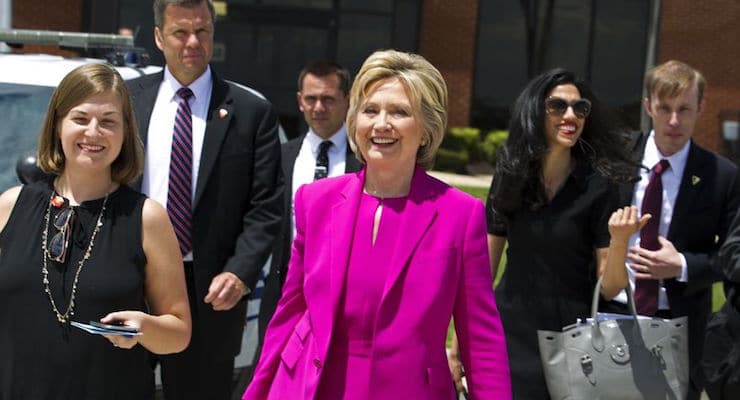 Democratic presidential candidate Hillary Clinton, followed by aide Huma Abedin, second from right, walks on the tarmac as she arrives to board Air Force One at Andrews Air Force Base, Md., Tuesday, July 5, 2016. President Barack Obama and Clinton are traveling to Charlotte, N.C. to campaign together. ( AP Photo/Jose Luis Magana)

It’s no mere academic question: Do we believe in the rule of law anymore? Are we a nation of laws or of men?

The cherished idea of the rule of law in our system is about everyone’s being subject to the law in equal measure. The law, including criminal law, applies even to our political leaders.

Both members of the American power couple known as the Clintons have escaped accountability all of their adult lives, so it comes as no shock that Hillary Clinton is once again being allowed to skate, even though the head of the very body tasked with investigating her — the FBI — has detailed precisely how Clinton did in fact break the law.

FBI Director James Comey laid out, with specificity, how Clinton violated our national security laws, but then he proceeded to explain that he was nevertheless declining to refer Clinton for federal prosecution.

Comey acknowledged that the federal criminal statute in question, by its terms, requires “gross negligence” — and not specific intent — and that Clinton’s behavior was “extremely careless.” We can split hairs all we want, but there is little, if any, difference, factually or legally, between gross negligence and extreme carelessness. Comey, despite his refusal to equate the two, is essentially saying it’s a moot point because he finds no precedent for anyone’s ever having been prosecuted under the statute in question (Title 18, Section 793(f) of U.S. Code) for gross negligence. It would be “unfair,” he says, to make this a case of first impression.

So are we to conclude that statutory language of Congress has a “sell by” date? That if no one is prosecuted under the clear words of a statute, the meaning of those words changes over time? Or does it change only if the acts of a special public official are involved?

Ask yourself: Would law enforcement officials conferring about whether to bring charges against a nonpublic figure or nonpublic official tie themselves in pretzels to avoid bringing criminal charges? That has not been my experience as an attorney.

Should the overriding concern here be fairness to Clinton or respect for our national security secrets? Surely, in a matter of such grave magnitude, it would be fair to hold Clinton accountable for knowingly commingling private and public (and classified) emails. Other subparagraphs of this very statute, e.g., Section 793(a), require specific intent for criminal liability, which means that Congress had to have deliberately set the standard lower in 793(f) — the section that applies to Clinton here. Why would Congress do that? Well, because the stakes are so high in these situations. Our national security is so important that a person entrusted with secret or classified information should know, whether she does in fact know, how dangerous it is to engage in the grossly reckless conduct Clinton engaged in.

Moreover, having consciously declined to follow the clear language of the statute, Comey also decided that Clinton did not have specific intent, because that standard, in his view, requires that a person knowingly broke the law. When I studied criminal law, specific intent didn’t usually require proof that a person knew her acts violated the law, only that she specifically intended to commit the acts that were unlawful.

When a prosecutor brings a criminal case against a defendant, say, for bank robbery, does any reasonable person believe that the prosecutor has the burden of proving the defendant was conversant with the statute forbidding bank robbery? No, he just must prove the person intended to rob the bank — an act forbidden by the law.

But even if we accept Comey’s bizarre redefinition of specific intent, is it conceivable that Clinton, with all her vast experience with classified material, was unaware that what she was doing was criminally wrong? No, Clinton specifically intended to commingle her emails — personal, private, public, classified — knowing it would put national security at grave risk.

In addition, reportedly, Clinton’s lawyers permanently deleted 30,000 emails. Would any reasonable person believe that Clinton was unaware they were going to do this? Would they have had any reason to allegedly obstruct justice in this way if these emails hadn’t been damning for Clinton? Would law enforcement give any other person the benefit of the doubt in this situation?

Regardless of what you assume about Comey’s integrity or whether you agree with his decision not to refer any charges for prosecution, how could he possibly say, with a straight face, that no reasonable prosecutor would prosecute on the facts of this case — facts that demonstrate Clinton violated the plain language of the statute?

Democrats keep saying Republicans are engaging in a partisan witch hunt — as if Republicans aren’t rightly outraged that Comey virtually admitted Clinton violated the clear language of the statute yet decided not to prosecute.

Clinton put our national security at risk. She put us all at risk while entrusted with the high and solemn duty of safeguarding our national security, and she is closer to being rewarded for it than she is to being punished. Is it any wonder that people have wholly given up on the system?

Given his record and his reputation for integrity, I will not jump to the conclusion that Comey is intentionally playing politics here, but I do believe it is plausible that he and his team are succumbing to a strong desire not to be accused of partisanship and therefore bent over backward to avoid prosecuting her. Call it the Justice Roberts effect.

It is a sad day for the rule of law and for the state of our national security because Comey’s decision takes the teeth out of the law and strongly weakens any deterrent force of the statute.

Comey may have succeeded in convincing himself that he is ensuring that Hillary Clinton is not subject to a different standard than the ordinary citizen, but through his explanations alone, he has convinced us of the exact opposite.
[mybooktable book=”the-emmaus-code-finding-jesus-in-the-old-testament” display=”summary” buybutton_shadowbox=”true”]

The War on Cops