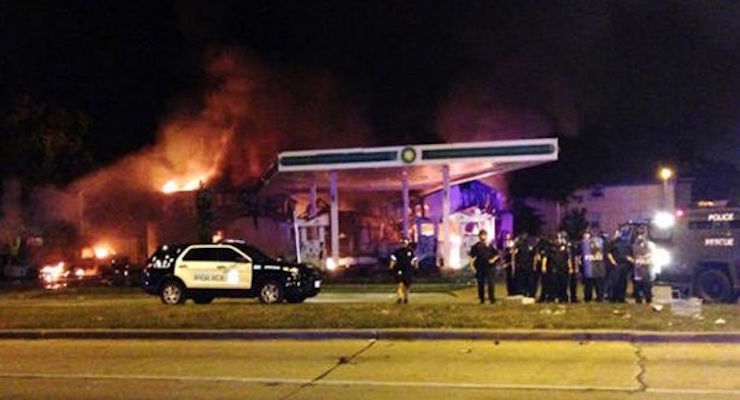 Police in Milwaukee respond to two days of unrest and violence.

We keep hearing that “black lives matter,” but they seem to matter only when that helps politicians to get votes, or when that slogan helps demagogues demonize the police. The other 99 percent of black lives destroyed by people who are not police do not seem to attract nearly as much attention in the media.

What about black success? Does that matter? Apparently not so much.

We have heard a lot about black students failing to meet academic standards. So you might think that it would be front-page news when some whole ghetto schools not only meet, but exceed, the academic standards of schools in more upscale communities.

There are in fact whole chains of charter schools where black and Hispanic youngsters score well above the national average on tests. There are the KIPP (Knowledge IS Power Program) schools and the Success Academy schools, for example.

In other words, minority kids from the same neighborhood, going to school in classes across the hall from each other, or on different floors, are scoring far above average and far below average on the same tests.

If black success was considered half as newsworthy as black failures, such facts would be headline news — and people who have the real interests of black and other minority students at heart would be asking, “Wow! How can we get more kids into these charter schools?”

Many minority parents have already taken notice. More than 43,000 families are on waiting lists to get their children into charter schools. But admission is by lottery, and far more have to be turned away than can be admitted.

Why? Because the teachers’ unions are opposed to charter schools — and they give big bucks to politicians, who in turn put obstacles and restrictions on the expansion of charter schools. These include politicians like New York’s “progressive” mayor Bill de Blasio, who poses as a friend of blacks by denigrating the police, standing alongside Al Sharpton.

The net result is that 90 percent of New York City’s students are taught in the regular public schools that have nothing like the success of charter schools run by KIPP and Success Academy.

That makes sense only politically, because it gains the money and the votes of the teachers’ unions, for whom schools exist to provide jobs for their members, rather than to provide education for children.

If you want to understand this crazy and unconscionable situation, just follow the money and follow the votes.

Black success is a threat to political empires and to a whole social vision behind those empires. That social vision has politicians like Bill de Blasio and Hillary Clinton cast in the role of rescuers and protectors of blacks from enemies threatening on all sides. If politicians can promote paranoia, that means bigger voter turnout, which is what really matters to them.

That same social vision allows the intelligentsia, whether in the media or in academia, to be on the side of the angels against the forces of evil. That’s heady stuff. And a bunch of kids taking tests doesn’t look nearly as exciting on TV as a mob marching through the streets, chanting that they want “dead cops.” Black success has very little to offer politicians or the intelligentsia. But black children’s lives and futures ought to matter — and would, if politicians and the intelligentsia were for real.

The Real Existential Threats of 2016

Commoners' Right to Hunt Under Threat