The French Have a Right to Ban the Burkini 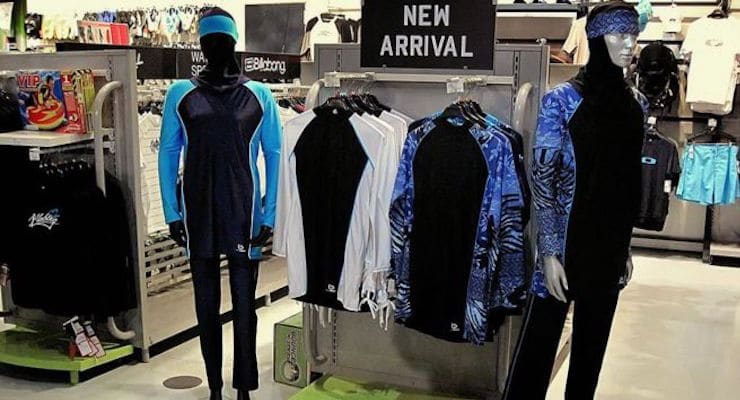 The Islamic full-length swimming suit known as burkini is displayed on mannequins at a department store in France. PHOTO: AFP

A few years ago, I took a French friend to a crowded beach in Rhode Island. No sooner had we hit the soft sands than she ripped off the top of her two-piece, baring her breasts to the sun and to curious boys playing nearby.

“You can’t do that,” I said. “This is New England. People don’t go topless here.”

Not entirely true. There are secluded beaches where New Englanders strip to nothing, but I kept it simple.

She gave me her you-Americans-are-so-backward smirk. I chose not to respond, regarding the region’s penchant for modesty as rather nice.

Which leads to the burkini ban in France. The burkini is a bathing suit favored by many Muslim women. It covers the entire body except for the hands, feet and face. Devout Muslims believe that women’s bodies must be largely hidden from public view.

The issue in France is political, not fashion aesthetics. Many worry that their large Muslim population is not assimilating into the predominant culture. French Prime Minister Manuel Valls called the burkini an emblem of “a counter-society” based on “the enslavement of women.”

Others in the West may see the body-covering bathing suit as merely eccentric. In the resort town of Blackpool, England, burkinis are sold and rented.

I could turn the tables on my friend and ask, “Why are you French so darned scared of a bathing suit?” But I won’t. Just as American beaches may stop women from going topless — and Iran can demand that women cover their hair — France can say non to the burkini as an offensive demonstration of apartness.

Arguing, as one Muslim woman did to BBC News, that banning burkinis “just hands ammunition” to Islamic radicals is not going to work. This is an implied threat — that if French officials don’t submit to their demands, violence could follow.

The French don’t take such threats lightly. They remain traumatized by a string of terrorist attacks. Only last month, a Muslim extremist drove a 19-ton cargo truck through a crowd celebrating Bastille Day in the seaside city of Nice, killing 86.

If it were up to me, the French would allow more latitude in distinctive dress. But I do shudder at the sight of a burqa in Western settings. A burqa covers a woman’s entire identity in a sheet, with only a cutout or mesh for the eyes.

In Manhattan, I recently saw a young man in jeans, summer shirt hanging out, walking with a woman entirely encased in a burqa. Scarves and other religion-based headgear are one thing, but the burqa, with its proclamation of female inferiority, is simply jarring.

In the opposite direction — but on a less intense level — it irks me to walk into a surf shop and see racks of roomy long shorts for the boys and tiny bikinis for the girls. At swimming areas, you see the male teens romping comfy and covered while their female companions go highly exposed and often self-conscious in their narrow strips of cloth.

In the end, it should not matter whether I or other non-French people approve of the burkini. If the French want to ban it, that’s their business. And regulating acceptable body exposure on their family beaches is Americans’ business.

Local authorities may set their own rules on dress in accordance with local sensibilities. One doesn’t have to like them — and minds can be changed — but that’s their right.

A Clash of Police Policies