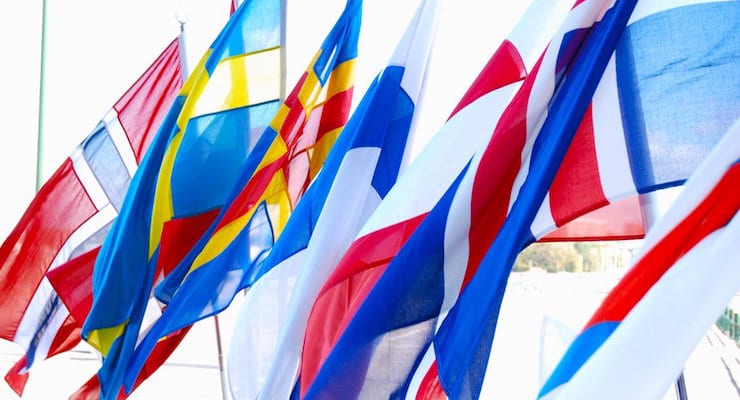 The flags of the Nordic nations such as Denmark, Norway, Sweden, Finland and Iceland.

When outspoken socialist Sen. Bernie Sanders was in the presidential race, he often expressed his dream to turn the United States into a Nordic-type social democracy like the one in Denmark. Hillary Clinton dismissed his comments by claiming that the United States isn’t Denmark. But the truth is that at the center of her political platform is an extensive set of Nordic-like government interventions, including paid sick leave, paid parental leave, subsidized child care and a more generous safety net — and higher taxes.

So what’s the appeal of Nordic democracies for U.S. Democrats? Writing in The Atlantic, Anu Partanen (a Finn living in the United States) claims that Nordic nations “offer their citizens — all of their citizens, but especially the middle class — high-quality services that save people a lot of money, time, and trouble.”

Partanen admits that Sanders’ socialist framing of the policies does the model a disservice. As “a proud Finn” with an American passport, she insists that these policies aren’t socialist in nature, saying they don’t go against free markets and they aren’t about big government; they’re about smart government.

We’re to believe that Nordic government programs — such as free college, free graduate school and nearly free health care, all paid for with higher consumption taxes — don’t involve trade-offs in the form of lower wages as they do everywhere else.

Don’t believe it, says Nima Sanandaji, a researcher who grew up in Sweden. His new book, “Debunking Utopia: Exposing the Myth of Nordic Socialism,” is a balanced and comprehensive analysis of Nordic public policies, including their home runs and failures. In particular, it nicely lays out the human and social cost of the welfare state.

Welfare policies have the same effects in Nordic countries as they do in other countries. As Nordic people have been asked to pay higher and higher taxes in exchange for the welfare payouts, their incentives to work less and capture government or mandatary company handouts have evolved to the point of undermining the countries’ economic foundations. Sanandaji has a lot of data, including some showing how Nordic workers have a stronger tendency to call in sick during sporting events. Maybe the most extreme example is a 41 percent increase of sickness among men in Sweden during the 2002 World Cup, up from 7 percent during the 1988 Winter Olympics.

Work ethics and a higher tolerance for collecting undeserved benefits have developed slowly, but the data show that over time, “Nordic people have changed their attitudes as social democratic policies have made it less rewarding to work hard and more rewarding to live off the government.”

To be sure, Nordic countries are at the forefront of gender equality, as we’re often reminded, and government programs such as paid family leave for both men and women and generous child care handouts help women balance their home life and work life. However, as Sanandaji asks, why are there so few Nordic women at the top? Data from the International Labour Organization show that in the United States, the share of female managers is 43 percent, as opposed to 28 percent in Denmark, 30 percent in Finland, 32 percent in Norway and 36 percent in Sweden.

Though it’s true that Nordic women participate in the labor force at higher rates than other countries, studies show that broad-based welfare policies tend to limit their ability to reach the top. That’s partly because they’re overrepresented in public-sector monopolies where wages are flat and rise based on seniority rather than individual achievement.

The truth is that Nordic nations were always leading in the fight for women, long before the welfare state came along. They also became comparatively rich when economic policy was dominated by free markets and small government in the 19th century and early 20th century. Unfortunately, the big welfare state policies, starting in the 1960s, have hampered their economic performance.

Finally, Sanandaji writes, “Nordic countries have more generous welfare systems than the United States, but change has indeed taken place.” In recent years, they’ve tempered the damage of their big-government policies by scaling back their welfare states and setting limits on their fiscal burdens. Their governments have adopted more work incentives, lowered taxes and allowed for more flexibility when hiring and firing workers. They’ve opened their public schools and health care to more competition, and Sweden partially privatized its pension system. They may not be free market quite yet, but they’re no socialist — or even liberal — utopia, either.

Veronique de Rugy is a senior research fellow at the Mercatus Center at George Mason University. Her primary research interests include the U.S. economy, the federal budget, homeland security, taxation, tax competition and financial privacy. Her popular weekly charts, published by the Mercatus Center, address economic issues ranging from lessons on creating sustainable economic growth to the implications of government tax and fiscal policies. She has testified numerous times in front of Congress on the effects of fiscal stimulus, debt, deficits and regulation on the economy.