HomeOpinionClinton Will Be Fine. Trump? Never

Clinton Will Be Fine. Trump? Never 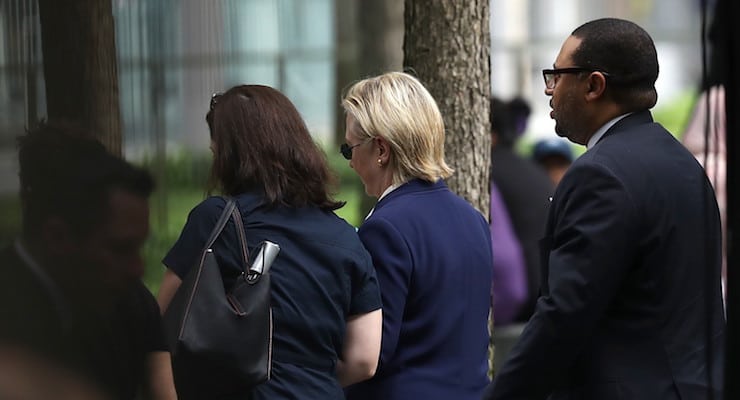 A friend 15 years older than Hillary Clinton recently came down with a mild pneumonia that sounds just like hers. Five days later, he was on a ladder pruning trees. The doctor wanted more rest, but he’s fine. And so will Clinton be.

I will dispense with the interminable chitchat of whether she should have revealed the pneumonia several days before. She had no obligation whatsoever to reveal a recoverable illness. On matters of disclosure, I’m much more interested in seeing Donald Trump’s tax return than the health work-ups of either 68-year-old Clinton or 70-year-old Trump.

That’s because we have a personage in the United States called vice president. Should the president become incapacitated, the VP would take over. In Clinton’s case, the chief executive’s duties would transfer to the estimable Tim Kaine, leaving the country in totally competent hands.

Were a President Trump to become incapacitated, the job would fall to Mike Pence, who would actually be an improvement. I frankly would not look forward to a Pence presidency, but we must prioritize our anxieties.

For one thing, Trump would no longer be able to turn American foreign policy into an instrument of self-enrichment. Suspicions of such plans are why we want to see his tax returns.
Many attribute Trump’s reticence to fear that the public would learn that he’s not the super-duper rich guy he purports to be. Another hunch is that the returns would show his business dealings with Russia, an American adversary.

The two would be related. Russian President Vladimir Putin turns vassals into multibillionaires by wielding the tools of corruption. As president, Trump could trade American foreign policy interests for unimaginable personal wealth. Signs of a budding beautiful friendship can be seen in Trump’s vocal adoration of the Russian authoritarian, something Trump has done at risk of his political aspirations but not his bottom line.

How do we know that Trump already has considerable business dealings with Russia? His son said so. At a 2008 conference on real estate in New York, Donald Trump Jr. said: “Russians make up a pretty disproportionate cross section of a lot of our assets. … We see a lot of money pouring in from Russia.”

Trump made millions bringing the 2013 Miss Universe pageant to Russia, according to The Washington Post. It was partly financed by a Putin ally. After attending a post-pageant party, Trump bragged, “Almost all of the oligarchs were in the room.”

Trump talks of weakening NATO, a bulwark against Russian aggression. He said he’d consider recognizing Russia’s annexation of Crimea and dropping sanctions over Russia’s invasion of Ukraine. Whether Trump wins or not, Putin has already gotten good value out of him.

The discussion of Clinton’s health should remind us that the choice of vice president is important. The older the person, the greater the medical risk. When John McCain ran for president in 2008 at 72 with a history of cancer, his naming of a grossly unqualified Sarah Palin as running mate undoubtedly cost him votes — perhaps the election.

Of course, younger people are not immune to health crises. And our sad history tells us that an assassin can cut down a national leader at any age. John F. Kennedy was killed at 46.

The political ramifications of Clinton’s bout with pneumonia will be hashed out ad nauseam. The more important consideration is who would serve as backup should any president be unable to perform her or his duties. On this count, Clinton, with Kaine at her side, is in terrific shape.