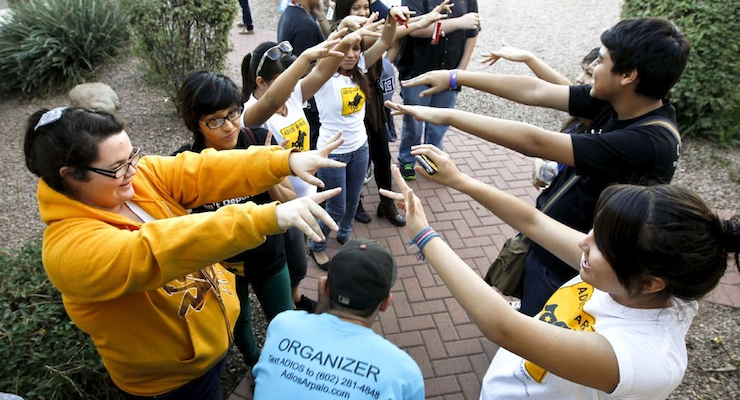 Members of Promise Arizona in Action volunteers cheer as they as they leave their headquarters to go canvass a neighborhood for voter registration Thursday, Oct. 25, 2012, in Phoenix.(AP Photo/Ross D. Franklin)

It is never easy to tell what people’s motives are. But, when the political left proclaims their devotion to improving the lives of others in general, and of the poor in particular, we can at least get some clues from the way they go about it.

One of the first things the left does is take away the right of other people to make their own choices.

For example, under current California law, Hispanic school children cannot be taught in Spanish if their parents want them taught in English. Like parents in other immigrant groups before them, Hispanic parents tend to want their children to learn English, so that those children will have more opportunities when they become adults in an English-speaking country.

But the left in general, and Hispanic activists in particular, have fought against leaving Hispanic parents with that choice. At the heart of the left’s vision of the world — and of themselves — is that they know better what is good for other people. This means that the left sees itself as having both a right and a duty to take away other people’s options.

This issue was fought out 18 years ago, in a California referendum on so-called “bilingual education,” which in practice meant largely teaching Hispanic school children in Spanish. All the forces of political correctness, including the media and the educational establishment, argued in favor of teaching those children in Spanish, even when their parents wanted them taught in English.

Despite a barrage of propaganda from the media and other organs of the left, a majority of California voters sided with Hispanic parents, and passed a law forbidding schools from imposing Spanish on children whose parents wanted them taught in English.

But the left never gives up on their pet notions. This year there is a new proposition on the California ballot — Proposition 58, very misleadingly phrased — that would take that choice away from parents, and let schools impose teaching in Spanish to Hispanic children, whether the parents want it or not.

The Spanish language issue in the schools is just one example of the left’s vision, which applies to many other issues.

There is the same dogged resistance on the left to allowing black parents to choose to have their children educated in charter schools that are part of the public school system, but are not subject to all the bureaucratic rules that lead to such bad results in other public schools.

Many years ago, in a debate on William F. Buckley’s program “Firing Line,” I was told by a left-wing lawyer that black parents without a good education themselves could not make wise choices for their children’s education.

But hard evidence says otherwise. There are whole chains of charter schools, such as the KIPP (Knowledge Is Power Program) schools and the Success Academy schools, where ghetto kids have academic achievements equal to those of children in affluent suburbs — and sometimes higher achievements.

Meanwhile, black children by the tens of thousands in New York alone are on waiting lists for charter schools because politicians, beholden to teachers’ unions for money and votes, fight against the expansion of charter schools. Not all charter schools are successful. But at least unsuccessful charter schools can be shut down, while other failing public schools keep right on failing.

When it comes to crime and violence, the political left, including much of the media, are having a great time demonizing the police. Blacks are the biggest victims of the sharp upturn in murders that has followed. But, yet again, hard evidence carries very little weight when the left is feeling good about themselves, while leaving havoc in their wake.

The absurdity to which this kind of media frenzy about the police can lead is shown by the fact that a black policeman in Charlotte, North Carolina, shooting a black suspect who had a gun, has been blown up into a racial issue across the nation. Have we become so gullible that we are so easily manipulated and stampeded?