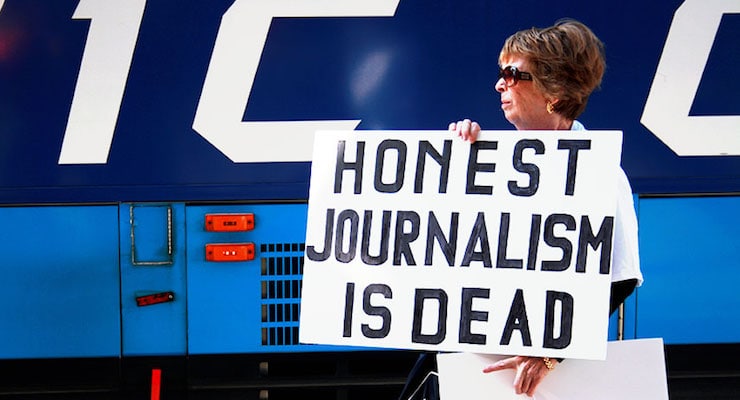 An American voter holds a “Honest Journalism is Dead” sign at a rally.

I’ve never been much of a conspiracy theorist, but I don’t know how reasonable people can fail to recognize the overt collusion of the Obama administration, the Democratic National Committee, the Democratic Party and the liberal media to shield Hillary Clinton from accountability for her many misdeeds and abundant corruption.

Perhaps I can be considered a bit of an alarmist, but if I am, so are millions of others when it comes to the dire state of this nation on a number of fronts. We have a staggering national debt, a dangerously declining military and a runaway regulatory state that is suppressing our liberties, insulating government from accountability and helping to smother economic growth. We have onerous taxes on people who are still working (notwithstanding the malicious lie that the wealthy don’t pay their fair share), an exploding welfare state, a war on the Second Amendment and the rights of private gun owners, and a government-caused health insurance catastrophe — with liberal promises of more of the same.

We have unprotected borders (which threatens jobs, national sovereignty and the integrity of democratic processes), a war on Christian religious liberties by militant secularists who deny they’re doing it and a sick, amoral culture supported by the openly valueless Democratic Party, which glorifies abortion as a quasi-religious right so important it must be subsidized by the federal government. We have politicized governmental entities — e.g., the IRS, Department of Justice, Environmental Protection Agency and Federal Communications Commission — and we are suffering ever-deteriorating race relations and a war on cops fomented and fueled by the president and his race-exploitive Democratic Party. We have proliferating Islamic terrorism accompanied by an administration that is in denial about it and sees more danger in generic extremism and conservative “bitter clingers” than it does in Islamic extremism.

These multitudinous existential threats to the United States are enough to cause anyone who cares about America, as founded, to lose sleep. I have confidence in the United States and the American people to rise to these challenges if they set their minds to it. The problem is that the entire liberal establishment is determined to obstruct the resolution of these problems. Liberals are primarily responsible for every last one of them and don’t even want to address them. To them, America is on the right course. They’ll tell you they want more jobs, for example, but they do everything in their power to keep that from happening — from minimum wage hikes to higher individual and corporate taxes to oppressive regulations to demonizing businesses, producers and entrepreneurs, who “didn’t build that.”

That’s why many believe we must oust Democrats from control of the White House. But in the past few months, anyone not afflicted with blinding liberal bias has been able to see that these policy issues are just the beginning of our problems. In addition to this destructive agenda, there is a level of collusion among the above-mentioned institutions — the Obama administration, the DNC, the Clinton machine and the liberal media — that is unprecedented in this nation.

We see this collusion and its poison fruit everywhere we look, in the coordinated witch hunt against a phantom anti-Islam video to shield Hillary Clinton and the rest of the Obama administration from accountability for the terrorist attacks in Benghazi, in the White House, Department of Justice and FBI scheme to protect Clinton from prosecution for her destruction of emails, in the DNC’s nefarious orchestration of violence and bullying of women at rallies for Donald Trump — evidenced by the fact that the main operative of that enterprise visited the White House hundreds of times — in the DNC’s voter fraud operation, in Clinton’s admitting that her private positions differ from her public ones, in the pay-to-play scandals of the Clinton Foundation and the administration’s insulating it from investigation, in the administration’s politicizing its actions according to various “food groups,” such as “needy Latinos,” in Clinton’s lying about the threat of terrorists entering the United States among the refugees with whom she wants to flood this country, in the denigration of Catholics, in the delivery of debate questions to Clinton in advance, in the probable cover-up of Clinton’s health issues, in the White House plan to target “violent ideologies,” in liberals’ goal of resurrecting the so-called Fairness Doctrine to suppress conservative opinion on radio, in the Democrats’ refusal to enforce immigration laws, in the surrendering of our sovereignty to the United Nations, in the promotion of voter fraud by opposing voter ID laws with the cudgel of phony allegations of racism, in the political targeting of conservatives by the IRS, in the circumvention of the legislative branch through lawless executive orders, in the liberal media’s absurdly disproportionate contributions to Democratic politicians and in the media’s highlighting of allegations against Trump and blackout of allegations against Bill and Hillary Clinton.

I’m concerned about the imminent destruction of our nation through disastrous policies should the Democrats remain in control. I fear a dangerous, Third World level of lawless one-party rule by a party that has demonstrated its contempt for the Constitution, the rule of law, the separation of powers, the democratic process, the watchdog role of the media, the military, American sovereignty, capitalism and liberty. If Hillary Clinton can get away with all of her corruption before she is even in charge of the executive branch, can you imagine what she’d be able to do when controlling it, presumably with a mandate to continue in the same vein?

Call me crazy. Call me an alarmist. Call me hyperbolic. But understand I am but one of the millions who fear for America’s future — and with overwhelmingly good reason.

The choice between Clinton and Trump? It’s not even close.

An Establishment in Panic