HomeOpinionJudges on the 9th Circuit Court Are Converts to Bolshevism

Judges on the 9th Circuit Court Are Converts to Bolshevism 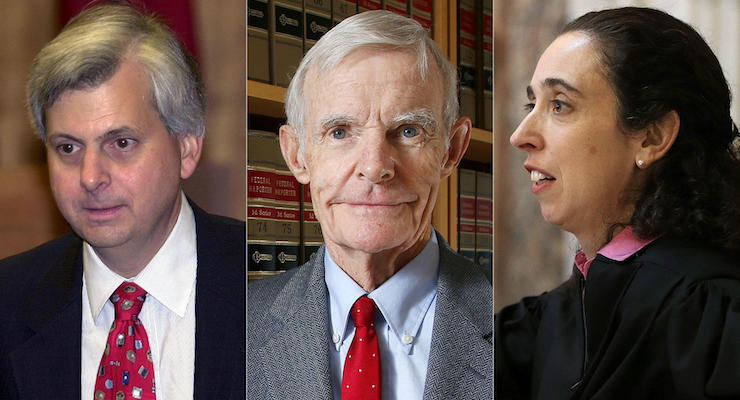 Pretend you are a family physician in Baghdad. You have a wife and five young children. You have no connection to America, but you imagine that your life there can be much better than in Iraq. You’ve heard that many American communities, especially in inner cities have a real shortage of physicians and you are dreaming of a quiet life with safety and opportunity for you and your children. So one day you buy bus tickets for you and your family to Amman, Jordan, and from there plan a direct flight to JFK. When you check in for your flight, you present your Iraqi passports to the ticket agent. The agent peruses carefully and asks you where your American visas are. You say that you don’t have any. The surprised agent informs you that she cannot honor your tickets and board you on that flight.

Normally, you’d be horrified; the long bus ride, the crying babies, the thousands of dollars spent on airfare, all lost. But as it happens, these are not normal times; it turns out you have been in touch with the Council for American Islamic Relations (CAIR) and an attorney, licensed in the State of New York, is already at the check-in counter. She informs the ticket agent that under the ruling of the 9th Circuit Federal Court of Appeals no person can be denied entry into the US without due process and that therefore a boarding pass must be issued. If it isn’t, irreparable harm is sure to befall this family who have already spent all of their life savings on the airfare. Furthermore she shows them a letter of employment from a clinic in Compton, Los Angeles, California that provides pro-bono healthcare to addicts; they have already extended the Iraqi physician an offer of employment and in fact his first day is tomorrow. The irreparable harm now extends to all the addicts who will not be able to see a doctor and may in fact die because of that. The press, of course, has been duly notified days in advance and is already there. The entire interaction is live on every screen in the world. The airline supervisor is called in; she enters a code, the NO BOARD loses the NO. Your family is on its way.

Three people whom nobody elected have just extended American constitutional protections to any person on the planet who may wish to claim them by trying to come to America. The implications of this action are truly mind boggling and beg the simple question: why? Why did these three individuals of varying ages and ethno-cultural backgrounds (one is Jewish, the two others appear to be Christian) decide to ignore and in fact countermand both Constitution and statute to visit this act of mass destruction on their own homeland? The surprising answer is that even if unwittingly the three justices are converts to Bolshevism.

Bolshevism was the brainchild of Vladimir Ilyich Ulyanov, later V.I. Lenin (after the Siberian river Lena on the banks of which he was once exiled). Developed in the first two decades of the twentieth century, Bolshevism is less of a political ideology and more of a mindset. Here are several of its main attributes:

Hate. The Bolshevik must hate with true passion and at all times. The object of hate is less important and is a matter of expediency. Do our justices possess this attribute? In spades. They hate Trump, his followers, and everything he represents with a burning passion. In fact, they hate America.

Passion for destruction. The Bolshevik is hell bent on destruction. Again, the object of the destruction is a matter of expediency. For Lenin it was the Russian empire and all it represented. For our justices it is America. They quite simply are filled with burning desire to destroy it.

Devil may care attitude about what comes next. The Russian Bolsheviks had no idea what they were going to do with Russia once they had managed to destroy the old order. They had no plans and it was not by omission. Our justices, having voted to in effect destroy the Constitution, never wondered if they had a better plan or a better set of ideas. They simply do not care.

Effacement of cultural, ethnic, and religious boundaries. The rallying cry of the Russian Bolsheviks was “Working People of All Nations Unite!” The early USSR had no national anthem, only the Internationale, a proto-Bolshevik anthem written Eugene Pottier in France in 1871. Its first stanza, translated from the Russian version reads:

“Stand up, ones who are branded by the curse,
All the world’s starving and enslaved!
Our outraged minds are boiling,
Ready to lead us into a deadly fight.
We will destroy this world of violence
Down to the foundations, and then
We will build our new world.
He who was nothing will become everything!”

The themes of destruction, hatred, effacement of boundaries, are all present in these words. And no, the following stanzas do not offer a recipe for reconstruction. It is clear from the decision handed down by the three justices that they valued unbridled immigration above all else. This kind of immigration from countries such as the seven Muslim majority countries subject to their decision, is desirable from their point of view precisely because it dilutes and destroys the unique American culture built by generations on the foundation of the U.S. Constitution.

Total disdain for honor. For the Bolsheviks, adhering to an honorable code of behavior was the hallmark of a fool and demanding such adherence was the hallmark of the oppressor. No oath was to be taken to heart, no promise to remain unbroken. The first actions undertaken by the Bolsheviks as they took power was to renege on all of the obligations undertaken by the previous government: private and public debt, military alliances, etc. Our justices took solemn oaths to defend and protect the Constitution. They swore to have had taken that oath “without mental reservation or purpose of evasion” and yet they gave their oaths not even a passing thought when they issued their Constitution-annulling decision.

Total disdain for positive outcomes. We normally think of successful governance as one that produces positive outcomes in terms of better healthcare, education, standard of living, etc. All of these things are considered negative outcomes by the Bolsheviks. Lenin famously (notoriously) said “the worse things are the better they are”. When a small community in Minnesota experiences an outbreak of drug resistant tuberculosis brought by Somalian refugees who were not properly vetted for health, the three justices of the 9th Circuit do not consider this a negative outcome in any way. For them it is a desired effect, part and parcel of the destruction of yet another quintessentially American community.

Hatred for law and order. Bolsheviks demolished the Russian Imperial criminal police. They viewed crimes such as murders, rapes, and crime against property as nothing to worry about and in fact well-aligned with their desired outcome of destruction. The 9th Circuit in particular and the American Left in general are well known for their anti-law enforcement decisions and policies.

Unsurprisingly, Bolshevism as a governing philosophy fails quickly and dramatically. Within the first five years of its existence three of which were taken up by a bloody civil war, the USSR experienced mass starvation, collapse of civil society, collapse of the military, and was for all intents and purposes a failed state frighteningly one that occupied a full one sixth of the world’s landmass. Thus the result of the Bolshevik experiment in Russia was the incubation within it of a brutal military dictatorship that we all know as the USSR. Starting with Stalin’s ascension to power, the Bolshevik mindset disappeared from all but official propaganda. The military had officers again. Law and order was restored by all means necessary and the USSR undertook international obligations, both financial and military, which it scrupulously upheld. When the time came to repel the German invasion, Stalin did not hesitate to resurrect Russian nationalism and even appeal to their Orthodox Christian faith.

The Bolshevik mindset that in the past permeated only the most rabid fringes of the American left, had in recent years gone mainstream and consumed its host, the hapless Democratic Party. Fortunately for America, a set of antibodies, dormant since the time of the Founding Fathers, have been activated, resulting in the historic electoral defeat handed to the Democrats in the 2016 general election. It now remains to be seen whether the Bolshevik cells in the judiciary, the military, the Deep State, and the civil service can be flushed out and eliminated before they can destroy America and once again plunge the world into darkness.

This article first appeared on Tsarizm.com, bringing you news you need to know RIGHT NOW about Eastern Europe and the former Soviet Union.

Trump, Sessions, and the Disgusting Thuggery of Asset Forfeiture

Time for Republicans to Pull the Plug on Border-Adjustable Tax