In Latest 2014 Index Of Economic Freedom, U.S. Falls Off The Map 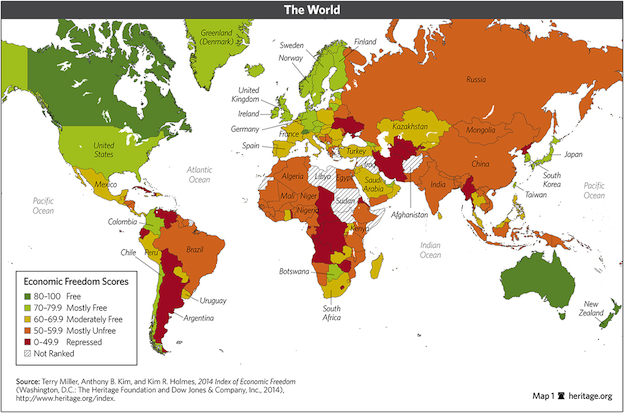 In the 2014 Index of Economic Freedom report, the United States has dropped off the map, a trend under Obama that moved the U.S. from 6 in 2009 to just 12.

The index, which was conducted by Heritage, found the United States to have an overall economic freedom score of 75.5.

“Over the 20-year history of the Index, the U.S.’s economic freedom has fluctuated significantly,” according to Heritage. “During the first 10 years, its score rose gradually, and it joined the ranks of the economically ‘free’ in 2006.”

But it has been all down hill from there, with a dramatic decline of almost 6 points since then, underscoring significant losses in property rights, freedom from corruption, and control of government spending.

According to Heritage, the United States is the only country to have seven consecutive years of losses in economic freedom. A table summarizing the entire study by country, is below.