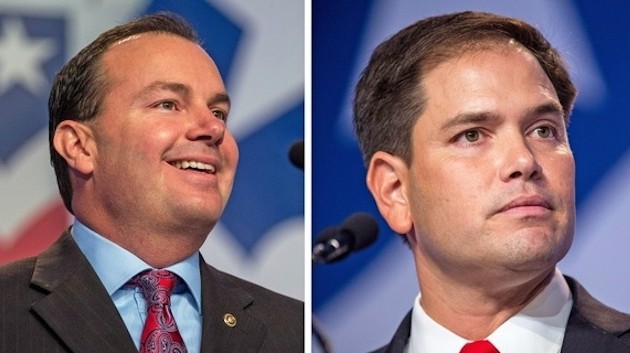 In my 2012 primer on fundamental tax reform, I explained that the three biggest warts in the current system.

These problems all need to be addressed, but I also acknowledged additional concerns with the internal revenue code, such as worldwide taxation and erosion of constitutional freedoms an civil liberties.

In a perfect world, we would shrink government to such a small size that there was no need for any sort of broad-based tax (remember, the United States prospered greatly for most of our history when there was no income tax).

In a good world, we could at least replace the corrupt internal revenue code with a simple and fair flat tax.

In today’s Washington, the best we can hope for is incremental reform.

But some incremental reforms can be very positive, and that’s the best way of describing the “Economic Growth and Family Fairness Tax Reform Plan” unveiled today by Senator Marco Rubio of Florida and Senator Mike Lee of Utah.

The two GOP senators have a column in today’s Wall Street Journal, and you can read a more detailed description of their plan by clicking here.

But here are the relevant details.

In the interest of fairness, I’ll start with the most disappointing feature of the plan. The top tax rate will be 35 percent, only a few percentage points lower than the 39.6 percent top rate that Obama imposed as a result of the fiscal cliff.

Even more troubling, that 35 percent top tax rate will be imposed on any taxable income above $75,000 for single taxpayers and $150,000 for married taxpayers.

Since the 35 percent and 39.6 percent tax rates currently apply only when income climbs above $400,000, that means a significant number of taxpayers will face higher marginal tax rates.

That’s a very disappointing feature in any tax plan, but it’s especially unfortunate in a proposal put forth my lawmakers who wrote in their WSJ column that they want to “lower rates for families and individuals.”

This will be a much longer section because there are several very attractive features of the Rubio-Lee plan.

Some households, for instance, will enjoy lower marginal tax rates under the new bracket structure, particularly if those households have lots of children (there’s a very big child tax credit).

But the really attractive features of the Rubio-Lee plan are those that deal with business taxation, double taxation, and international competitiveness.

Here’s a list of the most pro-growth elements of the plan.

A 25 percent tax rate on all business income – This means that the corporate tax rate is being reduced from 35 percent (the highest in the world), but also that there will be a 25 percent maximum rate on all small businesses that file using Schedule C as part of a 1040 tax return.

Sweeping reductions in double taxation – The Rubio-Lee plans eliminates the capital gains tax, the double tax on dividends, and the second layer of tax on interest.

Territorial taxation – Businesses no longer will have to pay a second layer of tax on income that is earned – and already subject to tax – in other nations.

No death tax – Income should not be subject to yet another layer of tax simply because someone dies. The Rubio-Lee plan eliminates this morally offensive form of double taxation.

In addition, it’s worth noting that the Rubio-Lee plan eliminate the state and local tax deduction, which is a perverse part of the tax code that enables higher taxes in states like New York and California.

Many years ago, while working at the Heritage Foundation, I created a matrix to grade competing tax reform plans. I updated that matrix last year to assess the proposal put forth by Congressman Dave Camp, the former Chairman of the House Ways & Means Committee.

Here’s another version of that matrix, this time including the Rubio-Lee plan.

As you can see, the Rubio-Lee plan gets top scores for “saving and investment” and “international competitiveness.”

And since these components have big implications for growth, the proposal would – if enacted – generate big benefits. The economy would grow faster, more jobs would be created, workers would enjoy higher wages, and American companies would be far more competitive.

By the way, if there was (and there probably should be) a “tax burden” grade in my matrix, the Rubio-Lee plan almost surely would get an “A+” score because the overall proposal is a substantial tax cut based on static scoring.

And even with dynamic scoring, this plan will reduce the amount of money going to Washington in the near future.

Of course, faster future growth will lead to more taxable income, so there will be revenue feedback. So the size of the tax cut will shrink over time, but even a curmudgeon like me doesn’t get that upset if politicians get more revenue because more Americans are working and earning higher wages.

That simply means another opportunity to push for more tax relief!

There are a few features of the tax code that aren’t addressed in the plan.

The health care exclusion is left untouched, largely because the two lawmakers understand that phasing out that preference is best handled as part of a combined tax reform/health reform proposal.

Some itemized deductions are left untouched, or simply tweaked.

And I’m not aware of any changes that would strengthen the legal rights of taxpayers when dealing with the IRS.

To their credit, Rubio and Lee would move the tax code in the direction of a flat tax, though sometimes in a haphazard fashion.

P.S. There is a big debate on the degree to which the tax code should provide large child credits. As I wrote in the Wall Street Journal last year, I much prefer lower tax rates since faster growth is the most effective long-run way to bolster the economic status of families.

But even the flat tax has a generous family-based allowance, so it’s largely a political judgement on how much tax relief should be dedicated to kids and how much should be used to lower tax rates.

That being said, I think the so-called reform conservatives undermine their case when they argue child-oriented tax relief is good because it might subsidize the creation of future taxpayers to prop up entitlement programs. We need to reform those programs, not give them more money.