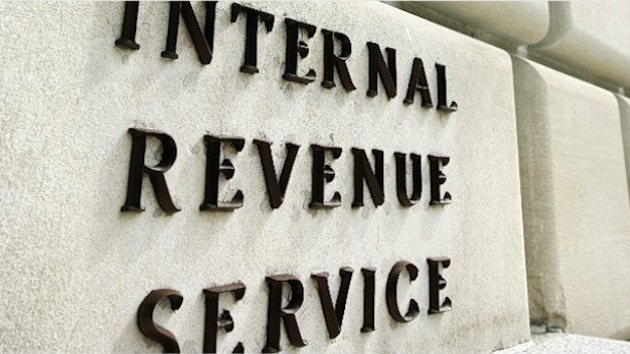 Like many taxpayers, I personally get upset with the Internal Revenue Service when I file my taxes. But I probably get angrier than the average taxpayer.

That’s because I have first-hand knowledge of the waste and fraud in the federal budget, so it galls me that so much of my income is being diverted to the open sewer of Washington.

So, they deserve most of the blame. That being said, we shouldn’t let the IRS off the hook.

Never forget, after all, that this is the bureaucracy that – in a disgusting display of bias – interfered with the electoral process by targeting the President’s opponents.

And then awarded bonuses to itself for this corrupt behavior!

So, when Neil Cavuto asked me whether the IRS deserved a bigger budget, you can see I was not exactly sympathetic. There are two points from the interview that deserve a bit of elaboration.

First, I pointed out that the IRS budget is far bigger than it was 30 years ago, even after adjusting for inflation.

So the notion that the tax collectors are suffering from “savage” budget cuts is utter nonsense. 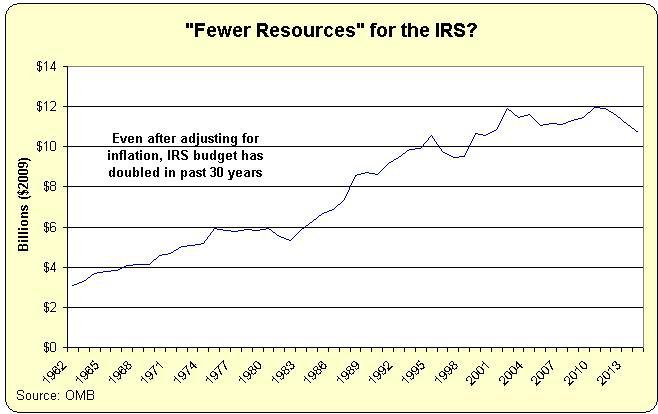 Not surprisingly, the IRS and its defenders like to compare today’s budget with the amount that was spent right after the faux stimulus, when every bureaucracy was gorging on other people’s money.

But as I explained in the interview, that’s very misleading.

Second, we have the bigger issue of how to deal with an ever-more sclerotic tax code and never-ending demands for more money out of Washington.

Assuming one thinks turning America into Greece is an acceptable or desirable outcome, the IRS will need more money.

But this is precisely why I said at the end of the interview that we should say no. Simply stated, giving the IRS a bigger budget almost certainly means a continuation of bad policy.

But maybe, just maybe, if the IRS budget is held in check, the politicians will conclude that we need tax reform and spending restraint. Remember, when all other options are exhausted, politicians sometimes do the right thing.

By the way, I’m not the only person who is upset. George Will also is irked with the Internal Revenue Service and wrote a powerful indictment of the corrupt bureaucracy for the Washington Post.

He starts by observing that the slimy and biased Lois Lerner will probably get away with her crimes thanks to Obama Administration stonewalling and obstruction of justice.

Lois G. Lerner…, as head of the IRS tax-exempt organizations division, directed the suppression of conservative advocacy groups by delaying and denying them the exempt status that was swiftly given to comparable liberal groups. …through dilatory and incomplete responses to subpoenas, and unresponsive answers to congressional questions…Lerner’s name now has an indelible Nixonian stain, but there probably will be no prosecution. If the administration’s stonewalling continues as the statute of limitations clock ticks, Roskam says, “She will get away with it.” …Many thousands of Lerner’s e-mails that supposedly were irretrievably lost have been found, but not released. The Justice Department’s investigation, which was entrusted to a political appointee who was a generous contributor to Barack Obama’s campaign, is a stone in the stone wall.

It’s discouraging that Ms. Lerner won’t be held accountable for criminal actions, but Will points out that at least Congress has the ability to engage in real oversight to hopefully deter further misbehavior.

One place to begin is with the evidence — anecdotal but, in the context of proven IRS corruption, convincing — of other possibly punitive IRS behavior toward Republican contributors and other conservative activists. This justifies examining the IRS’s audit selection process.  …Next, there should be hearings into the illegal disclosure of taxpayer information about conservative individuals and groups to the media and to liberal officials and groups.

And just in case anyone is tempted to feel sorry for the IRS, don’t forget that the bureaucracy continues to disregard the law.

Or, in some cases, to arbitrarily change the law.

…the IRS’s lawlessness has extended to its role in implementing the Affordable Care Act. The act says that federal subsidies shall be distributed by the IRS to persons who buy insurance through exchanges “established by the State.” …The court probably will rule that the IRS acted contrary to law. If so, the IRS certainly will not have acted contrary to its pattern of corruption in the service of the current administration.

Yup, he nailed it. A corrupt agency serving the interests of a corrupt White House.

P.S. Since we’re talking about taxation today, here’s a video from the oldie-but-goodie collection.

I can’t vouch for the veracity, but I gather this fellow was very upset by high property taxes.

As you might guess, my sympathies are with the Marquis de Maussabre.