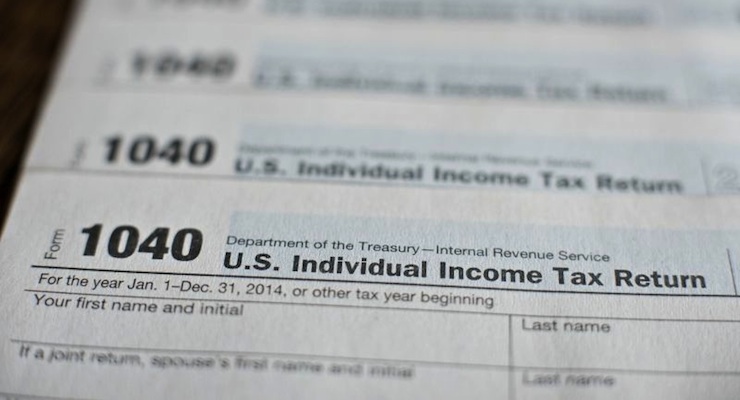 Authored by Joseph Antos, Andrew G. Biggs, Alex Brill, and Alan D. Viard, all of whom I know and admire, this new document outlines a series of reforms designed to restrain the growth of government and mitigate many of the tax code’s more punitive features.

Compared to current law, the plan is a huge improvement.

But huge improvement isn’t the same as perfect, so here’s my two cents on what’s really good, what’s partially good, and what has me worried.

I’ll start with something that’s both good and bad.

According to the latest CBO estimates, federal tax revenues for 2015 will absorb 17.7 percent of GDP and spending will consume 20.4 percent of economic output. Now look at this table showing the impact of the AEI proposal. As you can see, the burden of taxes and spending will both be higher in the future than today.

That’s obviously bad. One would think a conservative organization would present a plan that shrinks the size of government!

But here’s the catch. Under current law, the burden of government is projected to climb far more rapidly, largely because of demographic changes and poorly designed entitlement programs. So if we do nothing and leave government on auto-pilot, America will be saddled with a European-sized welfare state.

From that perspective, the AEI plan actually is good since it is based on reforms that stop most – but not all – of the already-legislated expansions in the size of the public sector.

Now let’s look at the specific reforms, staring with tax policy. Here’s some of what’s in the report.

The goal of our tax reform is to eliminate the income tax’s inherent bias against saving and investment and to reduce other tax distortions. To achieve this goal, the income tax system and the estate and gift taxes would be replaced by a progressive consumption tax, in the form of a Bradford X tax consisting of a…37 percent flat-rate firm-level tax on business cash flow and a graduated-rate household-level tax, with a top rate of 35 percent, on wages and fringe benefits.

At the risk of oversimplifying, the AEI folks decided that it was very important to solve the problem of double taxation and not so important to deal with the problem of a discriminatory and punitive rate structure. Which is sort of like embracing one big part of the flat tax while ignoring the other big part.

We’d have a less destructive tax code than we have now, but it wouldn’t be as good as it could be. Indeed, the plan is conceptually similar to the Rubio-Lee proposal, but with a lot more details.

Not that I’m happy with all those additional details.

To address environmental externalities in a more cost-effective and market-based manner, energy subsidies, tax credits, and regulations would be replaced by a modest carbon tax. The gasoline tax would be increased to cover highway-related costs.

I’m very nervous about giving Washington a new source of revenue. And while I’m open (in theory) to the argument that a carbon tax would be a better (less worse) approach than what we have now, I’m not sure it’s wise to trust that politicians won’t pull a bait and switch and burden us with both a costly energy tax and new forms of regulatory intervention.

And I definitely don’t like the idea of a higher gas tax. The federal government should be out of the transportation business.

There are also other features that irk me, including the continuation of some loopholes and the expansion of redistribution through the tax code.

Though I should also point out that the new tax system proposed by AEI would be territorial, which would be a big step in the right direction. And it’s also important to note that the X tax has full expensing, which solves the bias against investment in a depreciation-based system.

But now let’s look at the most worrisome feature of the plan. It explicitly says that Washington should get more money.

This is very counterproductive. But I don’t want to regurgitate my ideological anti-tax arguments (click here if that’s what you want). Let’s look at this issue from a strictly practical perspective.

I’ve reluctantly admitted that there are potential tax-hike deals that I would accept, at least in theory.

But those deals will never happen. In the real world, once the potential for additional revenue exists, the appetite for genuine spending restraint quickly evaporates. Just look at the evidence from Europe about the long-run relationship between taxes and debt and you’ll see that more revenue simply enables more spending.

Speaking of which, now let’s shift to the outlay side of the fiscal ledger.

We’ll start with Social Security, where the AEI folks are proposing to turn Social Security from a substandard social insurance program, which is bad, to a flat benefit, which might even be worse since it involves a shift to a system that is even more focused on redistribution.

The minimum benefit would be implemented immediately, increasing benefits for about one third of retirees, while benefits for middle- and high-earning individuals would be scaled down to the wage-indexed poverty level between now and 2050.

Yes, the system they propose is more fiscally sustainable for government, but what about the fact that most workers are paying record amounts of payroll tax in exchange for a miserly monthly payment?

This is why the right answer is personal retirement accounts.

The failure to embrace personal accounts may be the most disappointing feature of the AEI plan. And I wouldn’t be surprised if the authors veered in this unfortunate direction because they put the cart of debt reduction ahead of the horse of good policy.

To elaborate, a big challenge for real Social Security reform is the “transition cost” of financing promised benefits to current retirees and older workers when younger workers are allowed to shift their payroll taxes to personal accounts. Dealing with this challenge presumably means more borrowing over the next few decades, but it would give us a much better system in the long run. But this approach generally isn’t an attractive option for folks who fixate on near-term government debt.

That being said, there are spending reforms in the proposal that are very appealing.

The AEI plan basically endorses the good Medicare and Medicaid reforms that have been part of recent GOP budgets. And since those two programs are the biggest drivers of our long-run spending crisis, this is very important.

With regards to discretionary spending, the program maintains sequester/Budget Control Act spending levels for domestic programs, which is far too much since we should be abolishing departments such as HUD, Agriculture, Transportation, Education, etc.

But since Congress presumably would spend even more, the AEI plan could be considered a step in the right direction.

Finally, the AEI plan calls for military spending to consume 3.8 percent of economic output in perpetuity. National defense is one of the few legitimate functions of the federal government, but that doesn’t mean the Pentagon should get a blank check, particularly since big chunks of that check get used for dubious purposes. But I’ll let the foreign policy and defense crowd fight that issue since it’s not my area of expertise.

P.S. The Heritage Foundation also has thrown in the towel on personal retirement accounts and embraced a basic universal flat benefit.

P.P.S. On a completely different topic, here’s a fascinating chart that’s being shared on Twitter. 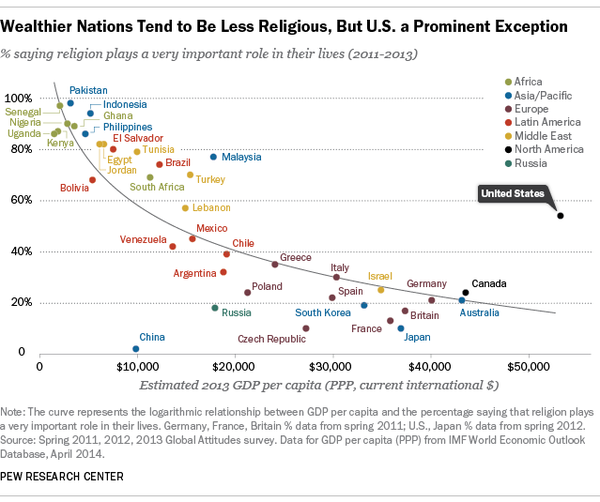 As you can see, the United States is an exception that proves the rule. I don’t know that there are any policy implications, but I can’t help but wonder whether America’s greater belief in self-reliance is linked to the tendency of religious people to believe in individual ethics and moral behavior.

Fiscal Fights with Friends, Part I: Responding to Reihan Salam’s Argument Against the Flat Tax