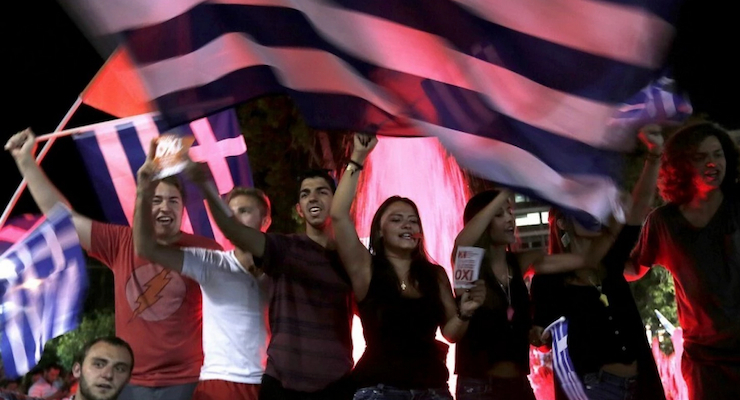 The European Commission’s data-gathering bureaucracy, Eurostat, has just published a new report on government finances for the region.

And with Greece’s ongoing fiscal turmoil getting headlines, this Eurostat publication is worthwhile because it debunks the notion, peddled by folks like Paul Krugman, that Europe has been harmed by “savage” and “harsh” spending cuts.

Here’s some of what’s in the report.

Not only is government spending consuming almost half of economic output, redistribution outlays are the biggest line item in the budgets of European nations.

At this point, some readers may be thinking that the report shows European nations have very big governments with very large welfare states, but that doesn’t prove one way or the other whether there’s been austerity.

After all, austerity supposedly measures the degree to which there have been big spending cuts, not whether government consumes a large or small share of economic output.

So let’s now look at some of the underlying annual spending data from Eurostat.

Here’s their chart showing annual levels of government spending, both for the entire European Union (EU-28) and for the nations using the euro currency (EA-19). As you can see, there haven’t been any “harsh” or “savage” cuts.

Heck, there haven’t even been “timid” and “meek” cuts. The burden of government spending keeps climbing.

None of this should come as a surprise.

So why is there a mythology about supposed spending cuts in Europe?

There are three answers.

The people in the first category should be dismissed as cranks and ideologues.

Regarding the second category, if you look at Eurostat’s annual fiscal data, you’ll find that most EU nations since 2008 have had at least one year in which government spending declined. Indeed, the only exceptions are Belgium, France, Luxembourg, Austria, Poland, Slovakia, Finland, and Sweden.

But we’ve also had a few years of spending reductions in the United States since 2008, yet it would be silly to argue we’ve had “savage” and “harsh” cuts. The real question is whether any governments have been forced to make non-trivial reductions in the burden of spending. And if that’s defined as spending less today than they did in 2008, the only nations on that list are Greece, Latvia, and Ireland. But they’re also high on the list of countries that were most profligate in the years before 2008, so is it “austerity” if you give up drinking for a week or two after spending a week or two in an alcoholic haze? Perhaps the answer is yes, but the real problem was having a spending binge in the first place.

The third category is also worth exploring because the best way to determine if a country has responsible policy is to see whether government spending is falling as a share of economic output (i.e., are they following Mitchell’s Golden Rule). But you can’t cherry pick the data. For instance, look at this chart from Eurostat. If 2009 is used as the base year, it appears that EU nations have been frugal. But 2009 also was the year with the biggest bailouts and faux stimulus packages. So while government spending has receded a bit from the 2009 peak, the overall burden of spending today is significantly higher than it was before the 2008 crisis. Not exactly a very rigorous definition of austerity.

The bottom line is that there hasn’t been serious austerity in Europe, at least if austerity is defined as non-trivial spending cuts.

So if folks are looking for a good explanation of why Europe is suffering from anemic growth, that might be a place to start.

P.S. Unlike other European countries, the Baltic nations focused on genuine spending cuts rather than tax hike and their economies are doing comparatively well.

P.P.S. Even though Switzerland isn’t a member of the EU, Eurostat does include annual spending data for that nation. And it’s worth noting that spending has only grown by 2.07 percent per year since the implementation of the debt brake (which is really a spending cap). So that’s actually the best role model in Europe, as explained here by a representative from the Swiss Embassy.