HomePolicyWarning: Bernie Sanders Will Be Very Expensive to Your Wallet

Warning: Bernie Sanders Will Be Very Expensive to Your Wallet

Almost everyone in Washington is talking about last night’s GOP debate. I sent out a few tweets as I watched, and my main after-the-fact observation is that there was very little discussion about the ever-growing burden of government spending, which is America’s most pressing economic problem.

But I’m a contrarian, so while everyone else is talking about Republicans, I’m going to focus instead on the Democratic side and address the fiscal agenda of Bernie Sanders. The Vermont Senator has a voting record is almost identical to the scores received by Barack Obama and Hillary Clinton when they were in the Senate, so one might wonder whether there’s a rationale for his candidacy.

But Sanders is tapping into a desire on the part of many Democratic voters who want a candidate who openly and proudly advocates for big government. And even if neither they nor Sanders actually know the technical distinction between socialism and traditional American-style leftism, there’s an appreciation for the fact that he actually says what he believes.

And he definitely believes that Washington knows best on the issue of spending money.

Writing for the Wall Street Journal, Laura Meckler reports on the price tag for Bernie Sanders’ agenda. It’s a big number, even by Washington standards.

Sen. Bernie Sanders…is proposing an array of new programs that would amount to the largest peacetime expansion of government in modern American history. …he backs at least $18 trillion in new spending over a decade… His agenda includes an estimated $15 trillion for a government-run health-care program that covers every American, plus large sums to rebuild roads and bridges, expand Social Security and make tuition free at public colleges. To pay for it, Mr. Sanders, a Vermont independent running for the Democratic nomination, has so far detailed tax increases that could bring in as much as $6.5 trillion over 10 years, according to his staff. A campaign aide said additional tax proposals would be offered to offset the cost of some, and possibly all, of his health program.

Here’s the breakdown of all the new spending.

The WSJ story also measures the degree to which the Sanders agenda would expand the burden of government spending.

…his agenda articulates the goals of many liberals and is exerting a leftward pressure on the party’s 2016 field. The Sanders program amounts to increasing total federal spending by about one-third—to a projected $68 trillion or so over 10 years. For many years, government spending has equaled about 20% of gross domestic product annually; his proposals would increase that to about 30% in their first year. As a share of the economy, that would represent a bigger increase in government spending than the New Deal or Great Society.

That’s good information, but keep in mind that the burden of government spending already is projected to climb substantially even without all of the new boondoggles being proposed by Sen. Sanders. So, what the Vermont Senator is really advocating is racing even faster in the direction of Greece. And that means pressure for additional tax hikes. So the bad ideas being proposed by Sanders will just be the beginning.

If the big spenders succeed, we can also expect proposals for an energy tax, a value-added tax, a wealth tax, and a financial transactions tax.

Just in case you think I’m being unfair to Sanders, let’s now cite someone who argues that the $18 trillion figure is needlessly scary because all that’s really happening is that certain activities will be shifted from the private sector to government.

Here are some excerpts from a column in the Washington Post by Paul Waldman.

…while Sanders does want to spend significant amounts of money, almost all of it is on things we’re already paying for; he just wants to change how we pay for them. In some ways it’s by spreading out a cost currently borne by a limited number of people to all taxpayers. …we shouldn’t treat his proposals as though they’re going to cost us $18 trillion on top of what we’re already paying.

He cites a hypothetical example.

In other words, notwithstanding my title, Waldman is saying that Sanders won’t be expensive to your wallet because he’s simply putting the government in charge of paying for certain things that are now privately financed.

That’s actually a (somewhat) fair point, but it overlooks two big issues. First, there will a lot more redistribution and class-warfare taxation if Sen. Sanders is able to impose his agenda. So the people who are being fleeced today by the IRS will be subject to additional demands to cough up money.

In other words, Sen. Sanders’ plan is a threat to the wallets of the people who actually pay for government.

Second, bigger government will have negative effects even if we limit the analysis to folks who theoretically are held harmless (like Waldman’s example of a person paying $1,000 more in taxes but paying $1,000 less in health premiums).

That’s because people’s willingness to work is driven in part by a desire to purchase certain things, such as health care and/or health insurance. As illustrated by this cartoon parody, that incentive would be eroded if Sanders’ agenda is adopted and folks can get freebies from Uncle Sam.

And people’s willingness to work also is impacted by marginal tax rates. So they’ll have less incentive to engage in productive behavior because of all the tax hikes needed to finance the new spending proposed by Sanders.

Moreover, keep in mind that governments don’t use resources as efficiently as the private sector. That means more waste and less growth. You don’t have to take my word for it. Even research from establishment organizations like the European Central Bank find that smaller governments are more efficient. And the normally left-leaning World Bank even acknowledged thatthe evidence is strong about bigger governments harming growth. 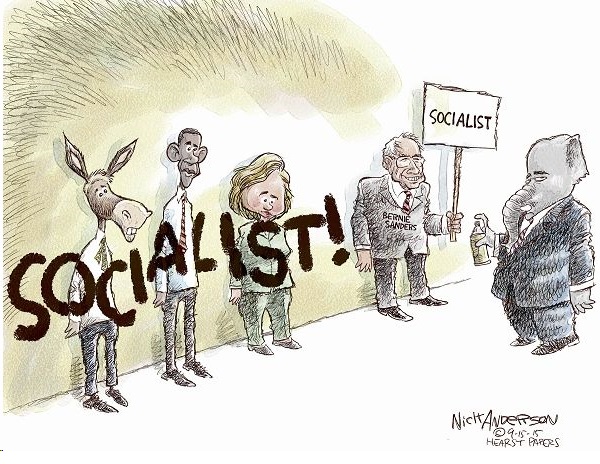 Let’s close with a political cartoon that showed up in my inbox. I have no idea if the cartoonist is trying to make fun of Republicans or make fun of Bernie Sanders, but he cleverly shows that Sanders embraces a term that others consider a slur. If you want some political humor that is clearly anti-Sanders, you can click here for two funny images.