When I wrote back in 2012 that France was committing fiscal suicide, I should have guessed that French President François Hollande would get impatient and push for even more statism.

Sure enough, the BBC reports that President Holland has a new plan. The ostensible goal is to reduce unemployment, but the practical effect is to expand the size and scope of government.

President Francois Hollande has set out a €2bn (£1.5bn) job creation plan in an attempt to lift France out of what he called a state of “economic emergency”. Under a two-year scheme, firms with fewer than 250 staff will get subsidies if they take on a young or unemployed person for six months or more. In addition, about 500,000 vocational training schemes will be created.

Needless to say, if subsidies and handouts were the key to job creation, France already would have full employment.

In reality, real jobs are created when employers think that new employees will produce profits. But that’s a difficult hurdle in a country like France.

Though, in the interest of fairness, I should acknowledge that Hollande claims this plan will not involve a net increase in the burden of government spending.

Mr Hollande said money for the plan would come from savings in other areas of public spending. “These €2bn will be financed without any new taxes of any kind,” said President Hollande, who announced the details during an annual speech to business leaders.

Though I suspect that this claim is about as believable as Obama’s laughable assertion that government-run healthcare would lower premiums and allow people to keep their health plans.

But the strangest part of the BBC story involves Hollande’s contortions on labor market policy. See if you can decipher this passage.

The president also addressed the issue of labour market flexibility. “Regarding the rules for hiring and laying off, we need to guarantee stability and predictability to both employers and employees. There is room for simplification,” he said. “The goal is also more security for the company to hire, to adapt its workforce when economic circumstances require, but also more security for the employee in the face of change and mobility”.

I gather Hollande wants people to believe he has some sort of magic wand that will magically give companies flexibility while also guaranteeing workers stability.

Put me in the skeptical column. I would be stunned if France actually liberalized its calcified labor markets. The unions are too powerful and too shortsighted to realize that employers will always be reluctant to hire unless they know they have the ability to fire. 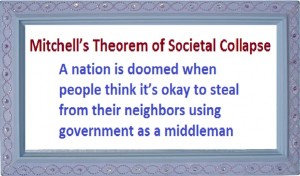 Besides, why would unemployed people, particularly those with low skill levels, want jobs when redistribution programs make idleness comparatively attractive?

Meanwhile, those with high skills will continue to escape the country.

So the bottom line is that France’s slow-motion economic suicide will continue. Hollande’s foolish policies simply mean the day of reckoning will come a bit sooner.

Let’s close with something that’s both revealing and amusing. One of America’s movie stars, Will Smith, had a very interesting wake-up moment on French TV.

I wonder what Mr. Smith would say if he knew that some French taxpayers actually have faced tax burdens of more than 100 percent (though Hollande, with his infinite mercy, then decided that the upper limit should be 80 percent).

P.S. My friend Veronique de Rugy (an escapee from France) warns Americans about the dangers of adopting the policies of her former country in this video.

P.P.S. Sadly, American statists have been urging European-type statism in the United States for decades. To see where that leads, check out these cartoons from Michael Ramirez, Glenn Foden, Eric Allie and Chip Bok.