HomePolicyWill the Last Productive Person in Greece Please Turn Off the Lights When You Leave?

Greek flags shadowed by the Parthenon in Athens, Greece.

This isn’t intentional, but there’s been a European theme to this week’s posts. I wrote yesterday about economic chaos in France, and the previous day I wrote about the grim consequences of Italian statism.

Today, we’re going to look at Greece. In the past, I’ve explained that Greece is special, albeit in a bad way. But I’ve also asserted that Greece could be rejuvenated and could deal with its debt with the right reforms.

Heck, Greece could even renege on its debt and still enjoy an economic renaissance if it adopted the right policies. That’s the message of this short video narrated by Garett Jones of George Mason University.

So the $64 question (actually, the $231,199,453,552 question according to the latest projection of Greek debt) is whether Greece will do the right kind of reform.

Unfortunately, it appears that all the bailouts have subsidized bad policy. Writing for National review, a journalist from Greece explains that his government is adding more and more taxes onto an overburdened private sector.

…the new austerity measures, which are often amusingly termed reforms, are for the most part tax increases — which may not be popular, but which conform to SYRIZA’s ideological creed. The new package agreed to by SYRIZA and Greece’s creditors is about 90 percent new taxes or tax increases and 10 percent reforms. The tax increases have the benefit of protecting SYRIZA’s core constituency, which is the public-sector employees. Despite the collapse of public revenue and the overall dismal economic outlook, the SYRIZA government plans to increase the salaries of public-sector employees (by as much as 8 percent) and carry on with 45,000 new hires in 2016. Meanwhile, in the private sector, SYRIZA has increased taxes on all sorts of things and is planning to double the taxation of farmers. It has increased business taxes and also demanded the pre-payment of business taxes. It has increased the VAT on almost all goods, and it is defining affluence down so as to increase income taxes for a greater number of taxpayers. And although Greece has probably the highest social-security contributions in Europe, SYRIZA is planning to increase these contributions even more, despite the fact that pensioners now outnumber those who are still employed in the private sector.

Wow, even I’m shocked by that factoid. There definitely are far more people riding in the wagon than pulling the wagon when you add up pensioners, bureaucrats, and welfare recipients.

So you can understand why Greece is almost surely doomed. 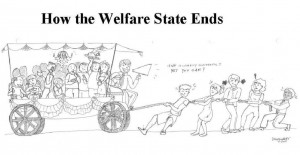 Especially when you consider that many of the people leaving Greece are the productive ones (i.e., those who normally would be pulling the wagon). Here are some passages from a story in the New York Times from last year.

From 2010 to 2013, about 218,000 Greeks emigrated, according to an estimate from the Greek statistics agency. Nearly half of them went to Germany. …Resentments against Germany — Greece’s most powerful creditor — quickly fade when it comes to the prospect of a regular paycheck. Many of those leaving Greece are highly educated professionals and scientists seeking greater opportunity and better pay. An estimated 135,000 Greeks with post-secondary degrees have left since 2010 and are working abroad, according to Lois Labrianidis, an economic geographer and official in Greece’s Economy Ministry. “We think this is human capital that is crucial for the development of the country,” Mr. Labrianidis told me recently, calling the departures a “major blow.” …While much of the attention on recent Greek emigration has focused on the highly educated, I’ve been surprised by the number of working-class Greeks I’ve met who left due to financial desperation.

But there’s one group of people who aren’t leaving.

You probably won’t be surprised to learn that they are the bureaucrats. As noted in this report from the U.K.-based Telegraph, their privileged position is zealously protected by vote-buying politicians.

The other thing most people in the area seem to agree on is that the biggest impediment to progress is the size of Greece’s public sector. The country has a population of 10 million, of which 2.5 million are pensioners, one million are government employees and two million work in the private sector. A further 1.7 million are unemployed. The rest are children or students. “So you can see why the current situation is unsustainable,” says Tryfon. “The only solution is for the public sector to be cut back. But every government since the crisis has chosen to raise taxes, while doing little to stimulate the private sector because they only want to protect votes.” “…Public sector employees and pensioners are the first to get paid and the only ones to get paid on time. We need investment into the private sector, but there is no motivation for companies to come to Greece…” a company would be nuts to invest in a politically unstable country, creaking under debt and crippled by an incredibly punitive tax regime. “What business will invest in a Greece when it takes six months to set up a company compared to Cyprus where it takes 15 minutes?” asks Dimitris Karkavitsas, an investment banker-turned-strawberry farmer. …the young engineer, says everyone who tries to make it in the private sector gets strangled. “The tax is killing us,” he says. …In the meantime, the public sector remains a massive beast.

Moreover, when you set up a company in Cyprus, there’s never a risk that you’ll be required to provide disgusting forms of DNA  as part of bureaucratic requirements.

Yet rather than be outraged by overpaid and meddlesome bureaucrats, I suspect most Greeks probably think how they can get on that gravy train. Which explains why, in  an interview, I said the Greeks shouldn’t be allowed to “loot and mooch their way through life.”

Until and unless they learn that lesson, the nation is doomed to societal collapse.

P.S. Another sign of Greece’s moral and fiscal bankruptcy is that pedophiles can get disability payments.