Worth noting, the Tax Foundation also took a look at the plan proposed by Vermont socialist Sen. Bernie Sanders, who, barring an indictment by the Justice Department as a result of the Federal Bureau of Investigation looking into her email practices during her tenure as secretary of state, will not be the party’s nominee.

On nearly every single indicator, Mr. Trump’s tax plan will have a more beneficial impact on the economy than Mrs. Clinton’s, which actually does damage to the U.S. economy over 10 years. However, despite what the presumptive Republican nominee has claimed, neither static nor dynamic scoring prevents billions of dollars in deficits as a result of Mr. Trump’s plan.

To be fair, Mr. Trump does have plans to offset the budget shortfall by reforming foreign interventions and the North Atlantic Treaty Organization, also called the North Atlantic Alliance or NATO. He also has plans to save money on health care and budgetary reform, which was not scored by the Tax Foundation. 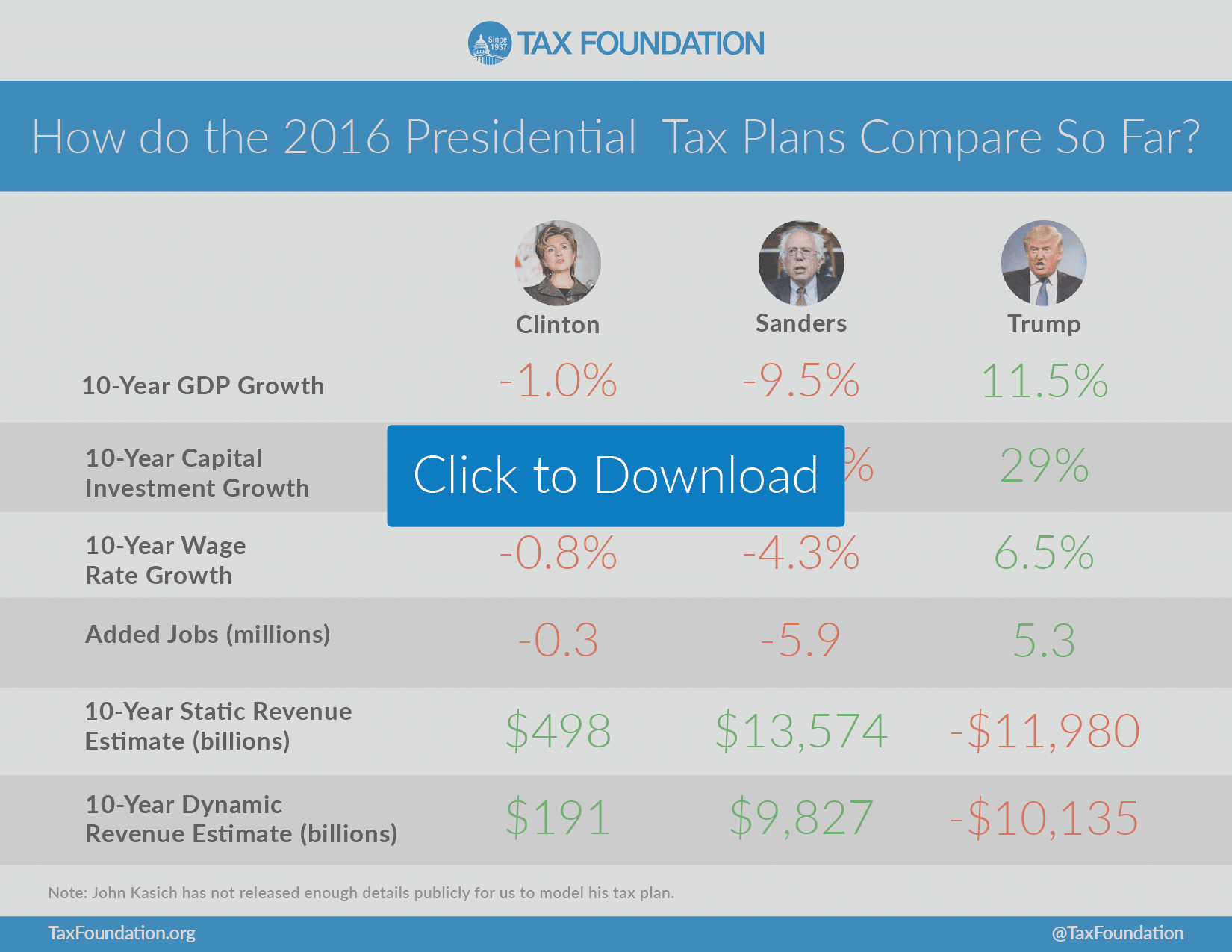 The study took a look at both plans regarding their impact on businesses and individuals.

Mrs. Clinton’s plan eliminates the deductibility of reinsurance premiums paid by corporations to foreign subsidiaries and provides an exclusion from income for reinsurance recovered for any arrangement where the deduction was disallowed. Establishes business tax credits for profit-sharing and apprenticeships and establishes a new tax on high-frequency trading.

While Mrs. Clinton doesn’t specify a rate, it is generally agreed upon that it would decrease volume, thus negatively impact share value by decreasing volume. Mrs. Clinton also proposes to establish business tax credits for profit-sharing and apprenticeships, a benefit that would likely be offset by new revenue streams.

Not surprisingly, the Republican candidate takes a different approach to businesses than the Democrat. The U.S. has the highest corporate tax rate in the developed world and the Trump plan responds by reducing the corporate income tax rate to 15%., which would make the country more competitive. It differs from traditional Republican tax reform proposals on the issue of fairness.

For instance, the plan caps the tax rate on pass-through business income (sole proprietorships, S corporations, LLCs, and partnerships) at 15% and ends tax deferral on overseas corporate income. He also caps the deductibility of interest expenses.

By some economists’ estimates, there are upwards of $2 trillion dollars overseas to avoid double-taxation, which could stimulate the economy by infusion investment. Mr. Trump enacts a one-time deemed repatriation tax of 10% on all foreign profits currently deferred in an effort to bring back that money. He also eliminates all other corporate tax expenditures and the corporate Alternative Minimum Tax.

Mrs. Clinton proposes a 4% “surcharge” on high-income taxpayers, which the Tax Foundation says will “effectively add an additional marginal tax rate of 43.6% for taxable income over $5 million” and a “24% top marginal tax rate for qualified dividend and long-term capital gain income.”

The plan would also enact the “Buffett Rule,” a proposal named after billionaire Warren Buffet and championed by President Barack Obama that would put in place a 30% minimum tax on taxpayers with adjusted gross income (AGI) over $1 million. The plan also phases-in the minimum tax between $1 million and $2 million of AGI.

Unlike his likely rival, Mr. Trump reforms the tax rate and consolidates 7 brackets into three: 10%, 20% and 25%. He calls for an increase in the standard deduction to $25,000 for those filing single returns and $50,000 for married filing jointly. The plan also “steepens the curve of the personal exemption phase-out and the Pease limitation on itemized deductions. Mr. Trump’s plan also eliminates the Alternative Minimum Tax, which currently stands at 3.8%, as well as the Net Investment Income Tax and the very unpopular Estate Tax.

In what is clearly a populist tip by the populist nationalist Republican, the plan taxes carried interest as ordinary income.

Motto of Sanders Voters: "Socialism is Fun So Long as Someone Else Pays For It"