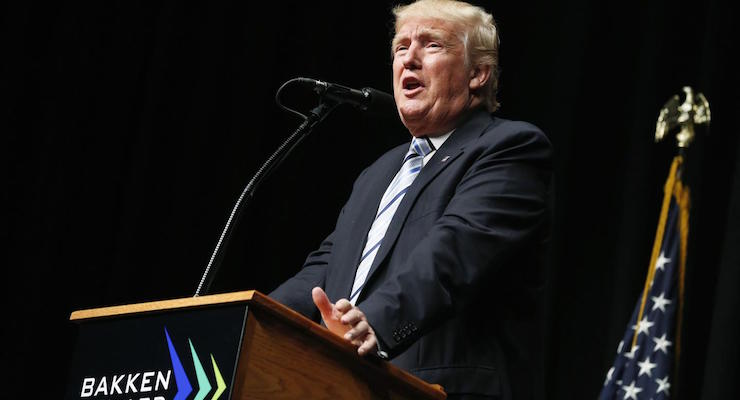 Thursday, May 26, 2016 – Donald Trump unveiled an “America first” energy plan during a policy speech at the Williston Basin Petroleum Conference in Bismarck, N.D., which consisted of an “all-of-the-above” approach. The presumptive Republican nominee also revealed his plan to expand the general election map, putting the battleground state number at 15 rather than 7 to 9.

I’m delighted to be in North Dakota, a state at the forefront of a new energy revolution.

Oil and natural gas production is up significantly in the last decade. Our oil imports have been cut in half.

But all this occurred in spite of massive new bureaucratic and political barriers.

President Obama has done everything he can to get in the way of American energy. He’s made life much more difficult for North Dakota, as costly regulation makes it harder and harder to turn a profit.

If Hillary Clinton is in charge, things will get much worse. She will shut down energy production across this country.

Millions of jobs, and trillions of dollars of wealth, will be destroyed as a result.

That is why our choice this November is so crucial.

Here’s what it comes down to.

It’s a choice between sharing in this great energy wealth, or sharing in the poverty promised by Hillary Clinton.

You don’t have to take my word for it. Just listen to Hillary Clinton’s own words. She has declared war on the American worker.

Here is what Hillary Clinton said earlier this year: “We are going to put a lot of coal miners and coal companies out of work.”

She wants to shut down the coal mines.

Let me tell you how President Obama Undermined Our Middle Class

His policy is death by a thousand cuts through an onslaught of regulations.

The Environmental Protection Agency’s use of totalitarian tactics forces energy operators in North Dakota into paying unprecedented multi-billion dollar fines before a penalty is even confirmed.

Government misconduct goes on and on:

Under my presidency, we will accomplish complete American energy independence.

Imagine a world in which our foes, and the oil cartels, can no longer use energy as a weapon.

But President Obama has done everything he can to keep us dependent on others. Let me list some of the good energy projects he killed.

He rejected the Keystone XL Pipeline despite the fact that:

Regulations that shut down hundreds of coal-fired power plants and block the construction of new ones.

A prohibition against coal production on federal land.

These actions have denied millions of Americans access to the energy wealth sitting under our feet.

This is your treasure, and you – the American People – are entitled to share in the riches.

President Obama’s anti-energy orders have also weakened our security, by keeping us reliant on foreign sources of energy.

If President Obama wanted to weaken America he couldn’t have done a better job.

As bad as President Obama is, Hillary Clinton will be worse.

Yet, while Hillary Clinton doesn’t want American energy, she is strongly in favor of foreign energy. Here is what she told China as Secretary of State:

Hillary Clinton has her priorities wrong. But we are going to turn all of that around.

A Trump Administration will develop an America First energy plan. Here is how this plan will make America Wealthy Again:

A Trump Administration will focus on real environmental challenges, not phony ones:

We’re going to do all this while taking proper regard for rational environmental concerns. We are going to conserve our beautiful natural habitats, reserves and resources.

In a Trump Administration, political activists with extreme agendas will no longer write the rules. Instead, we will work with conservationists whose only agenda is protecting nature.

From an environmental standpoint, my priorities are very simple: clean air and clean water.

My America First energy plan will do for the American People what Hillary Clinton will never do: create real jobs and real wage growth.

According to the Institute for Energy Research, lifting the restrictions on American energy will create a flood of new jobs:

The oil and natural gas industry supports 10 million high-paying Americans jobs and can create another 400,000 new jobs per year. This exploration will also create a resurgence in American manufacturing — dramatically reducing both our trade deficit and our budget deficit.

Compare this future to Hillary Clinton’s Venezuela-style politics of poverty.

In fact, every idea Hillary has will make jobs disappear.

She wants to tax and regulate our workers to the point of extinction.

She wants terrible trade deals, like NAFTA, signed by her husband, that will empty out our manufacturing.

During her time as Secretary of State, she surrendered to China – allowing them to steal hundreds of billions of dollars in our intellectual property.

She let them devalue their currency and add more than a trillion dollars to our trade deficit.

Then there was Libya.

Secretary Clinton’s reckless Libya invasion handed the country over to ISIS, which now controls the oil.

Her reckless decisions in Iraq, Libya, Iran, Egypt and Syria have made the Middle East more unstable than ever before.

Hillary’s open borders agenda means a young single mom living in poverty would have to compete for a job or a raise against millions of lower-wage workers rushing into the country, but she doesn’t care.

My agenda will be accomplished through a series of reforms that put America First:

There is one more thing we must do to make America wealthy again: we have to make our communities safe again.

Violent crime is rising in major cities across the country. This is unacceptable. Every parent has the right to raise their kids in safety.

When we put political correctness before justice, we hurt those who have the least. It undermines their schools, slashes the value of their homes, and drives away their jobs.

Crime is a stealth tax on the poor.

To those living in fear, I say: help is coming. A Trump Administration will return law and order to America. Security is not something that should only be enjoyed by the rich and powerful.

By the way, I was endorsed by the National Rifle Association, and we are not going to let Hillary Clinton abolish the 2nd amendment, either.

My reform agenda is going to bring wealth and security to the poorest communities in this country.

What does Hillary have to offer the poor but more of the same?

In Chicago, for instance, one-fourth of young Hispanics and one-third of young African-Americans are unemployed.

My message today to all the people trapped in poverty is this: politicians like Hillary Clinton have failed you.

They have used you.

You need something new. I am the only who will deliver it.

We are going to put America back to work.

We are going to put people before government.

We are going to rebuild our inner cities.

We are going to make you and your family safe, secure and prosperous.

It is a choice between certain decline, or a revival of America’s promise.

The people in charge of our government say things can’t change.

I am here to tell you that things have to change.

They want you to keep trusting the same people who’ve betrayed you.

I am here to tell you that if you keep supporting those who’ve let you down, then you will keep getting let down for the rest of your life.

I am prepared to kick the special interests out of Washington, D.C. and to hand their seat of power over to you.

Together, we will put the American people first again.

We will make our communities wealthy again.

We will make our cities safe again.

We will make our country strong again.

Ladies and Gentlemen: We will make America Great Again.