HomePolicyLesson From Cyprus: Spending Restraint is the Pro-Growth Way to Solve Fiscal Crisis 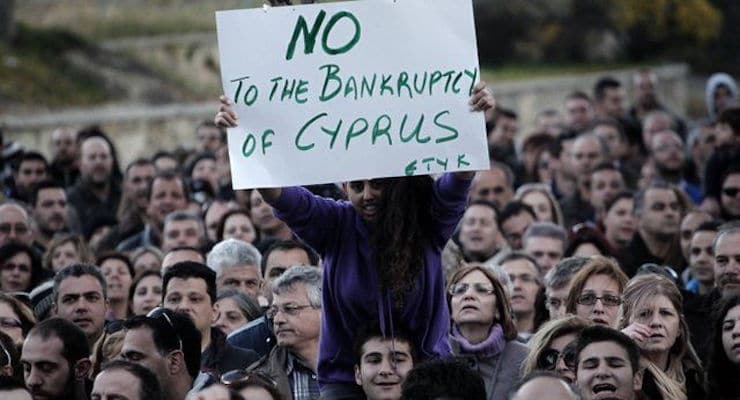 Protestors assemble in response to the government actions to curb the Cyprus debt crisis. (Photo: AP)

Much of my work on fiscal policy is focused on educating audiences about the long-run benefits of small government and modest taxation. But what about the short-run issue of how to deal with a fiscal crisis? I have periodically weighed in on this topic, citing research from places like the European Central Bank and International Monetary Fund to show that spending restraint is the right approach.

And I’ve also highlighted the success of the Baltic nations, all of which responded to the recent crisis with genuine spending cuts (and I very much enjoyed exposing Paul Krugman’s erroneous attack on Estonia).

Today, let’s look at Cyprus. That Mediterranean nation got in trouble because of an unsustainable long-run increase in the burden of government spending. Combined with the fallout caused by an insolvent banking system, Cyprus suffered a deep crisis earlier this decade.

Unlike many other European nations, however, Cyprus decided to deal with its over-spending problem by tightening belts in the public sector rather than the private sector.

This approach has been very successful according to a report from the Associated Press.

…emerging from a three-year, multi-billion euro rescue program, Cyprus boasts one of the highest economic growth rates among the 19 eurozone countries — an annual rate of 2.7 percent in the first quarter. Finance Minister Harris Georgiades says Cyprus turned its economy around by aggressively slashing costs but also by avoiding piling on new taxes that would weigh ordinary folks down and put a serious damper on growth. “We didn’t raise taxes that would burden an already strained economy,” he told The Associated Press in an interview. “We found spending cuts that weren’t detrimental to economic activity.”

Cutting spending and avoiding tax hike? This is catnip for Dan Mitchell!

But did Cyprus actually cut spending, and by how much?

That’s not an easy question to answer because the two main English-language data sources don’t match.

According to the IMF data, outlays were sliced to €8.1 billion in 2014, down from a peak of €8.5 in 2011. Though the IMF indicates that those numbers are preliminary. The European Commission database shows a bigger drop, with outlays of €7.0 billion in 2015 compared to €8.3 billion in 2011 (also an outlay spike in 2014, presumably because of a bank bailout).

The bottom line is that, while it’s unclear which numbers are most accurate, Cyprus has experienced a multi-year period of spending restraint. And having the burden of government grow slower than the private sector always has been and always will be the best gauge of good fiscal policy.

By contrast, there’s no evidence that tax increases are a route to fiscal probity. Indeed, the endless parade of tax hikes in Greece shows that such an approach greatly impedes economic recovery.

Critics have accused the government of working its fiscal gymnastics on the backs of the poor — essentially chopping salaries for public sector workers. Pambis Kyritsis, head of the left-wing PEO trade union, said the government’s “neo-liberal” policies coupled with the creditors’ harsh terms have widened the chasm between the have and have-nots to huge proportions. …Georgiades turned Kyritsis argument around to reinforce his point that there shouldn’t be any let-up in the government’s reform program and fiscal discipline.

In the European context, “liberal” or “neo-liberal” means pro-market and small government (akin to “classical liberal” or “libertarian” in the United States).

Semantics aside, it will be interesting to see whether Finance Minister Georgiades is correct about maintaining spending discipline as the economy rebounds.

As the above table indicates, there are several examples of nations getting good results by limiting the growth of government spending. But there are very few examples of long-run success since very few nations have politicians with the fortitude to control outlays if the economy is growing and generating an uptick in tax revenue (which is why states like California periodically get in trouble).

This is why the best long-run answer is some sort of constitutional spending cap, similar to what exists in Switzerland or Hong Kong.

The bottom line if that spending restraint is good short-run policy and good long-run policy. Though I doubt Hillary Clinton will learn the right lesson.