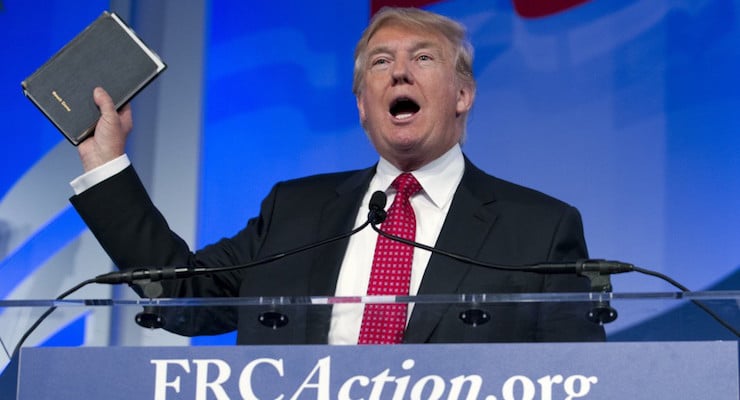 Donald Trump, holds up his Bible as he speaks during the Values Voter Summit Sept. 25 in Washington (Photo: AP/Jose Luis Magana)

When I wrote last year about “Hillary Clinton’s Plan to Increase the Cost of College,” I explained that colleges and universities boost tuition when the government hands out more subsidies to students, so the main effect is to make higher education even more expensive.

Today, let’s look at Donald Trump’s plan to increase the cost of childcare. And this is a very easy column to write because the economic consequences of Trump’s plan to make childcare expenses deductible are the same as Hillary’s misguided plan to subsidize tuition.

Let’s start with a caveat. We don’t know a lot about Trump’s new scheme. All we know is that he said in his big speech to the Economic Club of Detroit that “My plan will also help reduce the cost of childcare by allowing parents to fully deduct the average cost of childcare spending from their taxes.”

From an economic perspective, Trump’s statement doesn’t make sense. At best, creating a big deduction for childcare expenses simply creates the illusion of lower cost because of the tax loophole.

But that’s the best-case scenario. The actual result will be to increase costs and make the tax code even more convoluted.

When income is shielded from taxation, either based on how it is earned or how it is spent, that creates an incentive for taxpayers to make economically irrational decisions solely to benefit from the special tax preference. And just as the healthcare exclusion has led to ever-higher prices and ever-greater levels of bureaucracy and inefficiency in the health sector, a deduction for childcare expenses will have similar effects in that sector of the economy. Providers will boost prices to capture much of the benefit (much as colleges have jacked up tuition to capture the value of government-provided loans and grants).

Creating a new distortion in the tax code also will have a discriminatory impact. The tax loophole will only have value for parents who use outside care for their kids. Parents who care for their own kids get nothing. Moreover, the new loophole also won’t have any value for the millions of people who don’t earn enough to have any tax liability. Yet these people will be hurt when childcare providers increase their prices to capture the value of the deduction for parents with higher levels of income.

And that will probably lead politicians to make the tax loophole “refundable,” which is a wonky way of saying that people with low levels of income will get handouts from the government (in other words, “refundable” tax breaks are actually government spending laundered through the tax code, just like much of the EITC).

So we’d almost certainly be looking at a typical example of Mitchell’s Law, where one bad policy leads to another bad policy.

And when the dust settles, government is bigger, the tax code is more convoluted, and the visible foot of government crowds out another slice of the invisible hand of the market.

I want fewer favors in the tax code, not more. I want rationality to guide economic decisions, not distorting tax preferences. Most of all, I don’t want politicians to have more power over the economy. I wish Trump listened to Ben Carson when putting together a tax plan.