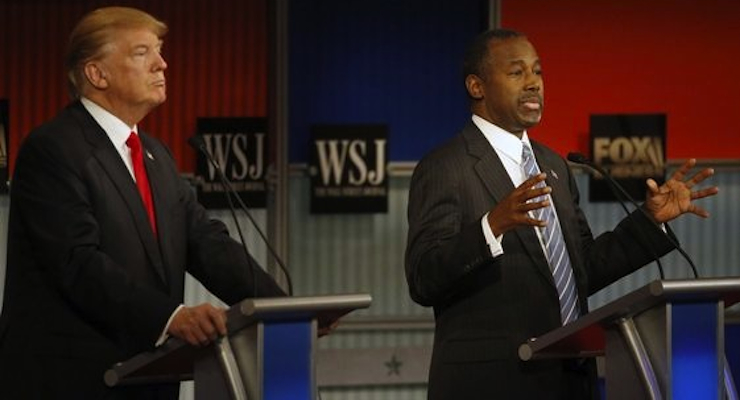 When I compared the tax reform proposals of various 2016 presidential candidates last month, Ben Carson got the best grade by a slight margin. But I’ve now decided to boost his overall grade from a B+ to A-, or perhaps even A, because he’s finally released details and that means his grade for “specificity” jumps from a C to A-.

Here’s some of what’s been reported in the Wall Street Journal.

Republican presidential candidate Ben Carson on Monday called for imposing a 14.9% flat tax rate on income, ending taxes on capital gains and dividends and abolishing the charitable deduction and all tax credits.

Mr. Carson’s flat tax would apply only to income above 150% of the poverty level… In some respects, Mr. Carson’s plan is similar to those of the other candidates, all of whom want to lower tax rates… But he goes farther, particularly with his willingness to rip up parts of the tax system that have been in place for a century. …In addition to eliminating the charitable deduction and investment taxation, Mr. Carson would also repeal the estate tax, the mortgage-interest deduction, the state and local tax deduction,  depreciation rules and the alternative minimum tax.

Wow, no distorting preferences for charity or housing. And no double taxation of any form, along with expensing instead of depreciation. Very impressive.

Carson has basically put forth a pure version of the plan first proposed by economists at Stanford University’s Hoover Institution. Perhaps most important of all, Carson’s plan is a flat tax and just a flat tax. He doesn’t create any new taxes that could backfire in the future.

Here’s what the Carson campaign wrote about his flat tax compared to the plans put forth by Rand Paul and Ted Cruz.

Unlike proposals advanced by other candidates, my tax plan does not compromise with special interests on deductions or waffle on tax shelters and loopholes. Nor does it falsely claim to be a flat tax while still deriving the bulk of its revenues through higher business flat taxes that amount to a European-style value-added tax (VAT). Adding a VAT on top of the income tax would not only impose an immense tax increase on the American people, but also become a burdensome drag on the U.S. economy.

I would have used different language, warning about the danger of a much-higher future fiscal burden because Washington would have both an income tax and a VAT, but the bottom line is that I like Carson’s plan because the worst outcome is that future politicians might eventually recreate the current income tax.

What I don’t like about the Paul and Cruz plans, by contrast, is that future politicians could much more easily turn America into France or Greece.

Here’s my video that explains why the flat tax is the best system (at least until we shrink the federal government to such a degree that we no longer need any form of broad-based taxation).

P.S. If you want to get hyper-technical, Carson’s plan may not be a pure flat tax because he would require a very small payment from everybody (akin to whatGovernor Bobby Jindal proposed). Though if the “de minimis” payment is a fixed amount (say $50 per adult) rather than a second rate (say 1% on the poor), then I certainly would argue it qualifies as being pure.

P.P.S. Carson still has a chance to move his overall grade to A or A+ if he makes the plan viable by proposing an equally detailed plan (presumably consisting ofgenuine entitlement reform and meaningful spending caps) to deal with the problem of excessive government spending.