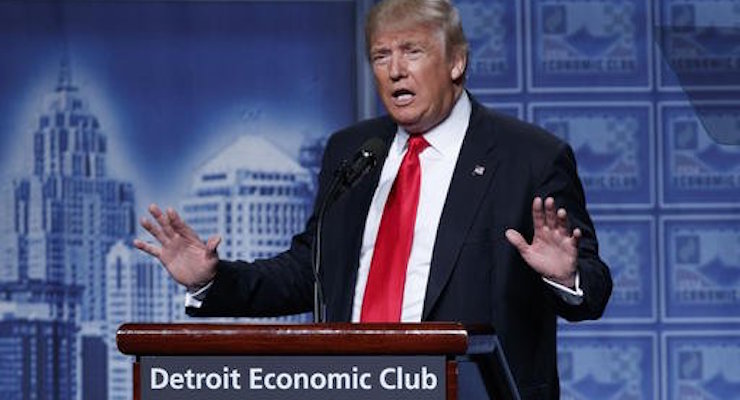 In addition to fretting about his overall approach on the big issue of liberty vs. government, I’ve specifically criticized his views on protectionism, on bailouts, on entitlements, monetary policy, tax policy, and (just yesterday) distorting tax loopholes.

But skepticism isn’t the same as bias.

I commend Trump when he says something accurate or when he proposes good policies, and I defend him when he’s unfairly attacked.

With this in mind, it’s time to point out something very accurate in his big speech yesterday to the Detroit Economic Club.

He issued a strong and effective indictment of Obamanomics.

…let’s look at what the Obama-Clinton policies have done nationally. Their policies produced 1.2% growth, the weakest so-called recovery since the Great Depression… There are now 94.3 million Americans outside the labor force. …We have the lowest labor force participation rates in four decades. …Meanwhile, American households are earning more than $4,000 less today than they were sixteen years ago.

Trump’s basically right. No matter how you slice and dice the data, Obamanomics (which he refers to as Obama-Clinton policies for obvious reasons) clearly hasn’t worked.

We’ve had the weakest recovery since the Great Depression. Labor-force participation is dismal. And median household income has lagged.

I touched on some of those issues in this discussion on Fox Business News.

But you don’t have to believe me.

When President Obama took office during the 2007-09 recession no president was ever better positioned to lead a strong recovery. With an impressive electoral mandate, Mr. Obama enjoyed a filibuster-proof Senate supermajority, a 79-vote House majority and a nation ready for change. History too seemed to smile on Mr. Obama’s endeavor. The recession ended just six months into his first term and, with the sole exception of the Great Depression, every severe recession since 1870—when reliable annual data were first collected—had been followed by a vigorous recovery.

They point out that President Obama used the opportunity to push Keynesian fiscal and monetary policy.

No resources were spared. The Obama $836 billion stimulus exceeded all previous U.S. economic stimulus programs combined. The Treasury borrowed over $1 trillion a year for four years in a row, according to Office of Management and Budget data. The Federal Reserve injected $3 trillion of new reserves into the banking system, generating record-low interest rates.

And the institutions with Keynesian models predicted (what a surprise) that we would get good results.

In August 2010, the Congressional Budget Office projected 3.3% average real GDP growth for 2010-15. The Federal Reserve forecast growth as strong as 3.7%. Mr. Obama’s own Office of Management and Budget expected peak growth of 4.5%.

Gramm and Solon point out that there’s only been one other “recovery” remotely similar to the one we’re having now.

…in only two recoveries did government impose economic policies radically different from the policies pursued in all the other recoveries—different than traditional policy but similar to each other— FDR’s Great Depression and Mr. Obama’s Great Recession. …When Mr. Obama replicated some of FDR’s “progressive” policies, history was there to reteach its lessons.

The so-called New Deal was a statist disaster than lengthened and deepened the Great Depression.

Indeed, it was only a Great Depression because of awful policies that began under Herbert Hoover and then continued under Franklin Roosevelt.

Obama wanted the second coming of the New Deal.

The good news is that he wasn’t able to impose nearly as much bad policy as Hoover and FDR.

The bad news is that he imposed enough bad policy to produce an abnormally weak recovery.

Which leads to the lesson that everyone should learn.

The dominant lesson of the Great Depression and the Great Recession is that when government overspends, overtaxes and over-regulates, economic freedom is suppressed and economic growth vanishes.

Sadly, I don’t think either Donald Trump or Hillary Clinton understand this lesson.