HomePolicyThe Best and Worst Cities in the United States

The Best and Worst Cities in the United States 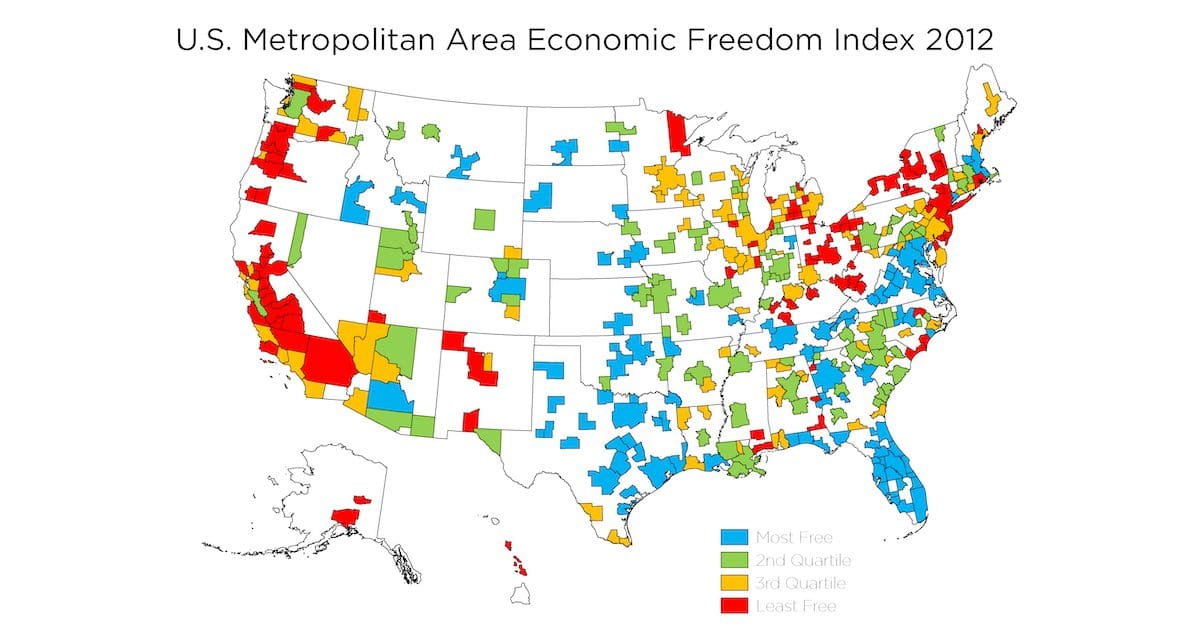 There are several options if you want to measure economic freedom and competitiveness among nations (rankings from the Fraser Institute, Heritage Foundation, and World Economic Forum).

You also have many choices if you want to measure economic freedom and competitiveness among states (rankings from the Tax Foundation, Mercatus Center, and Fraser Institute).

But there’s never been a good source if you want to know which local jurisdiction is best.

Dean Stansel of Southern Methodist University is helping to fill this gap with a report looking at the relative quality of government policy in various metropolitan statistical areas (MSAs encompass not just a city, but also economically relevant suburbs).

So who wins this contest?

Here are the five most-free MSAs. It’s worth noting that all of them are in states with no income tax, which shows that good state policy helps.

What if we limit ourselves to large cities?

Here are the five most-free MSAs with population over 1 million. As you can see, Houston is in first place and zero-income-tax Texas and Florida are well represented.

Now let’s shift to the localities on the bottom of the rankings.

Which MSA is the worst place for economic freedom in America?

Congratulations to El Centro in California for winning this booby prize. As you can see, jurisdictions in New York and California dominate.

What if we look are larger jurisdictions, those with over 1 million people?

In this case, Riverside-San Bernardino-Ontario is the worst place to live.

Though if you want to focus on big cities, the NYC metro area deserves special mention.

The same thing is true for states.

So you shouldn’t be surprised to discover that it also is true for metro areas.

Last but not least, here’s a map showing freedom in all MSAs.

I’m not surprised to see so much red in California and New York, but I didn’t realize that Ohio (thanks for nothing, Kasich), Oregon, and West Virginia were so bad.

And the good results for Texas and Florida are predictable, but I didn’t think Virginia would look so good.